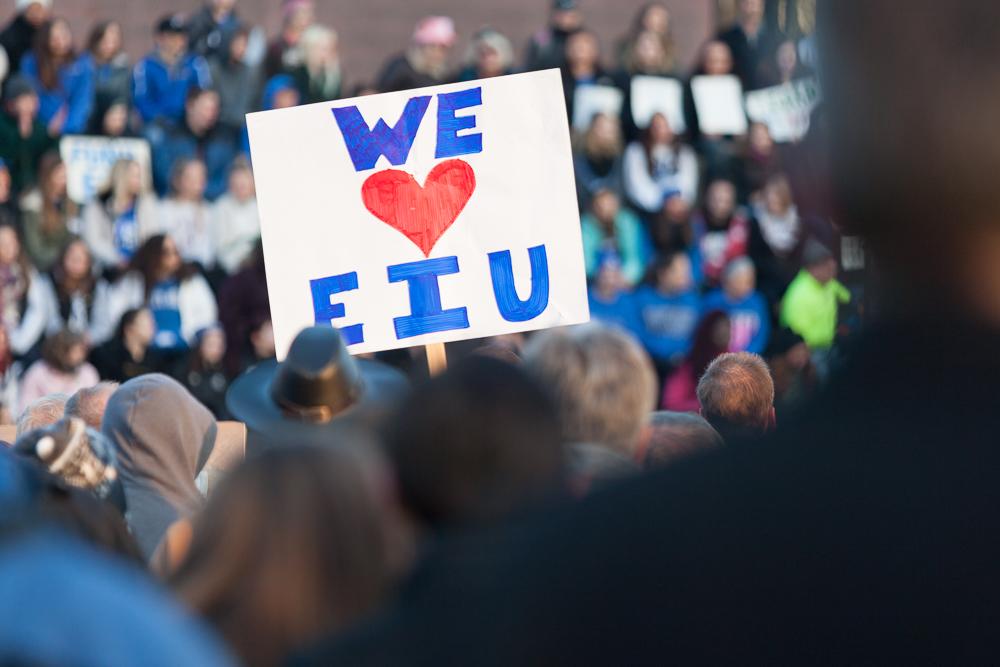 Ralliers assemble at the steps of the Doudna Fine Arts Center during the Fund EIU rally on Friday. (Jason Howell)

Ralliers assemble at the steps of the Doudna Fine Arts Center during the Fund EIU rally on Friday.

The normally calm Library Quad was booming with chants and rumblings from the hundreds of Eastern supporters who braved the bitter temperatures to demand state appropriations during Friday’s “Fund EIU” rally.

The Steps at the Doudna Fine Arts Center and surrounding lawn were packed with students, community members, faculty and staff, state representatives, and others who share an interest in Eastern’s future.

Signs bobbed above the crowd conveying messages of love for Eastern as well as frustration in legislators for carrying out Illinois’ budget stalemate for eight months.

The #FundEIU was trending on Facebook Friday night as ralliers posted photos and videos from the demonstration and alumni shared their sentiments about the university.

Gateway adviser Yolanda Williams told the crowd it was time for action, even “to flip a table or two.”

Williams said Gov. Bruce Rauner is trying to split up the family and home that is Eastern.

“By not passing the budget, the governor is letting my home, my school, our sister schools suffer,” Williams said. “It’s messing with our family, and I’m not letting that happen without a fight.”

Williams charged students with letting Rauner know what is right.

“We will flood his office with calls, emails, we will sign petitions; we will tweet him, sign the budget and give us our money,” Williams said.

“You’re not meeting people who are just working for their paychecks,” Ahmad said. “They’re here to care about us.”

Ahmad said it is not fair the university is forced to say goodbye to so many employees.

“We all feel it. We all know that everyone’s fighting on their own because we don’t know what we’re doing,” Ahmad said. “That is not fair.”

“It is time for students, faculty, staff and community members across campuses around Illinois to say in one voice that our futures are not merely special interests to be bartered with,” Mejdrich said.

He said without an appropriations bill, the university would continue to see damages.

“The 200 Eastern employees who came to work this week only to find out they would be laid off are just the latest casualties,” Mejdrich said. “These hardworking members of our campus community have contributed so much only to be thanked by a pink slip from Springfield.”

Sen. Scott Bennett (D-Champaign) addressed the crowd and said although Eastern is not in his district many of the faculty and staff who have been laid off live there.

“Even if that wasn’t the case, I would still want to be here because this is where the fight is,” Bennett said.

Rep. Reggie Phillips (R-Charleston) said he should have been allowed to speak at the rally as “one of the biggest supporters of EIU on the House floor.”

Phillips said allowing Bennett to speak at the rally was a partisan decision, and he did not believe the “rhetoric and hype” would get the attention of Republican leaders like Rauner.

“You might lean towards Democratic, because there are young kids and professors, I get it, but right now we need to work in a bipartisan way,” Phillips said.

Phillips said he would prefer a 6.5 percent cut to the university rather than Rauner’s original plan to cut 32 percent, but he still agrees with the initial cut of 6.5 percent to higher education.

Sen. Dale Righter (R-Mattoon) said he also believed the decision to not let him speak was motivated by partisan ties.

“It’s easy to come to these rallies and yell out what people want to hear,” Righter said. “That’s not what I wanted to do.”

However, Righter said he could see some positives potentially resulting from the rally.

“I hope that all of this goes to the governor’s office, but I also hope it goes to (Democratic Speaker Michael) Madigan’s office,” he said.

Righter said Eastern’s budgetary problems have compounded over the years from things like declining enrollment.

Rally organizer Kate Klipp, a Charleston resident and 2007 Eastern graduate, said while Righter did ask for permission to speak, she did not believe it would be in the best interest of the rally.

“(Sen.) Scott Bennett mentioned that we should let them speak, and I imagine a couple of others believed so as well, but this was not a political stomping ground for them,” Klipp said. “Too much work went into it to hand them a campaign speech.”

Klipp said it was great for them to be present to hear the community’s concerns, and she hopes they will pass them along in Springfield.

Klipp said she hopes other campuses will start their own rallies and make the movement to fund universities a statewide effort.

Catie Witt, executive vice president of the Student Senate, said FundEIU is in the process of becoming a registered student organization.

Yazmin Rodriguez, a senior sociology major, said the budget impasse was not fair to anyone, including her high school sister who wants to come to Eastern.

“(My sister) has always wanted to come here; it’s just something everyone should know about Eastern, how amazing it is and how we should have money,” Rodriguez said.

Rodriguez said she was angry about the absence of a budget for higher education.

“I love we are voicing our opinions so they can hear us and change their minds,” Rodriguez said. “I thought it was so amazing how many people came together.”

Sue Dhermy, a Mattoon resident, shared her concerns with Righter and Phillips during the rally about funding for Sexual Assault Counseling and Information Service.

“The way that they’re cutting programs and funding is ridiculous,” Dhermy said. “I’ve made more progress in a year with SACIS than I’ve made in 38 years of my life; they literally saved my life.”

Jo Gentry, an accountant at Eastern, has worked for the university for 24 years and is now worried she may receive a lay-off notice.

Gentry, who also graduated from Eastern, voiced her concerns to representatives at the rally about MAP Grant funding.

“I went to school on MAP money; if it wasn’t there at that time, I wouldn’t have gone to school anywhere,” Gentry said. “Then I came back, started working here and got my master’s too. I want you students to really understand the MAP Grants and what those mean.”

Mike Carter, the roofer foreman at Eastern for 27 years, said the first time he came to Eastern was in 1979 when he was putting roofs on several of the buildings on campus.

“I’ve never seen anything like this,” Carter said. “I’ve always enjoyed working here. (Eastern) has a lot at stake.”

Deb Wolf, a former kinesiology and sports studies professor, and Dale Wolf, a former director of admissions, are both retired, and they said they still support the community.

“I’m amazed that we’ve gotten to this point,” Dale Wolf said. “I can only hope that people come to their senses and realize that they have to talk to each other.”

Deb Wolf said the crisis may result in people leaving the city and state.

“There are businesses that depend on students,” Dale Wolf said. “We hate to see people being laid off from their jobs.”

Dale said he is worried because the state is only four months away from the next budget and there still isn’t a budget for the 2015-2016 fiscal year.

“It’s really important that they get their things together,” Dale said.

“I’m really appreciative of all of the support and love that’s been showed to EIU by our students and faculty, staff and the community,” Glassman said.

Charleston Mayor Brandon Combs said Eastern is a vital part of the community, and he was happy to see so many people show their support.

“It comes down to the city if there’s layoffs and things of that nature,” Combs said. “Obviously it hurts our whole community, so it’s a trickle-down effect.”

Derek Light, president of Eastern’s chapter of the American Federation of State, County and Municipal Employees, said although members of his union are scared because of the uncertainty of the layoffs, they also support Glassman and understand he is doing his best.

“It’s time for Springfield to listen and do their job and pass a budget,” Light said. “Nobody else can go eight months without paying their bills, so why can they?”

Analicia Haynes contributed to this article 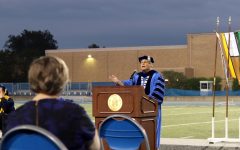 VIDEO: RSOs on display at Pantherpalooza 2018

Students learned about the various Registered Student Organizations Eastern has to offer at Wednesday's Pantherpalooza.... 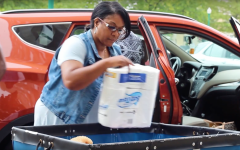 Video: Students move in to EIU 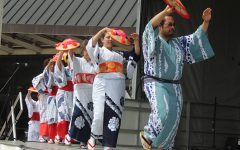 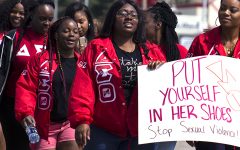 Gallery: Walk a Mile in Her Shoes 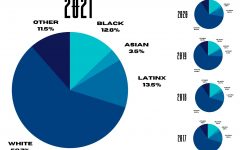 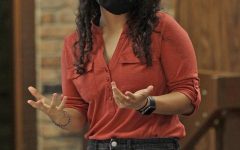 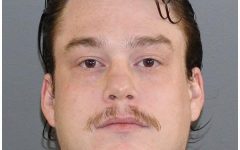 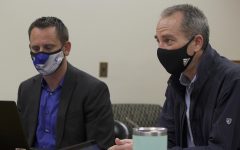 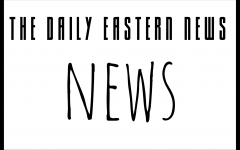