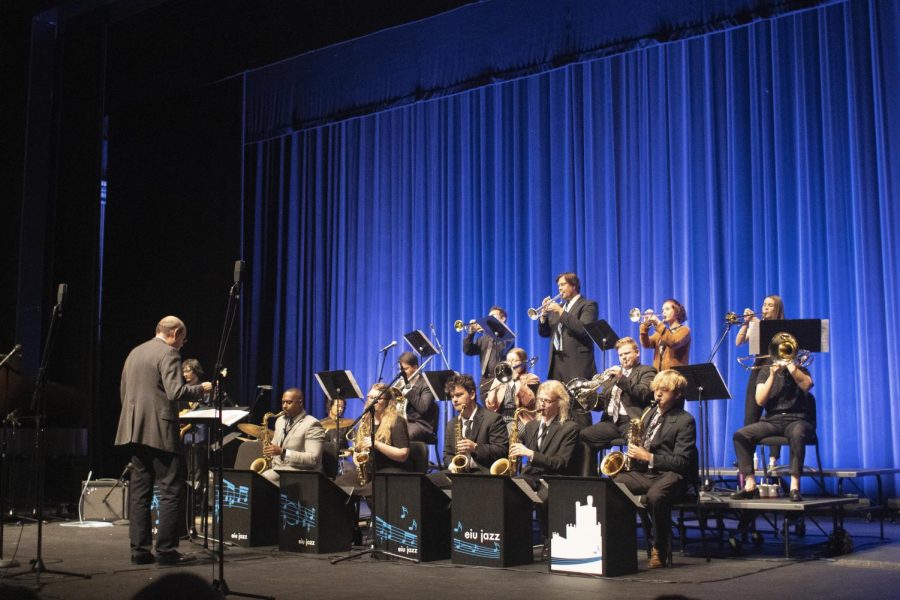 The Jazz Showcase performs in the Theatre Thursday night.

In total, eleven songs were played divided between the bands. Among them, one of the music directors, Paul Johnson, a professor of jazz studies and jazz piano, even performed alongside his students as piano accompaniment.

When asked about his role within the music program, Johnson explained that he did a little bit of everything.

Johnson works as a music professor, teaching with actual instruments for improvisation and general playing, as well as teaching music history.

He also works with the combos as a director. Johnson is comfortable with going back and forth and being flexible with his many different responsibilities.

“I’m used to it; just by nature of teaching here you’re always kind of going all over the place, so that’s kind of the fun of it,” Johnson said.

When explaining his selection process of songs to include within the program, Johnson said that he wanted to include a variety of music to showcase different moods and vibes possible due to the nature of the night being an introduction to the jazz program.

When questioned about the challenges being faced by only having five weeks to prepare with new students in this show and how it impacted everything, the two directors had different views than one of their performers.

Johnson said the greatest challenge was getting a cohesive sound from a large band who had not yet all played together due to the new students.

The second director Sam Fagaly, a professor of saxophone and director of jazz studies, said the directors are used to adapting to the new group of students.

“This is kind of why we do this early in the year,” Fagaly said. “It’s an incentive for the students to get to work quickly and get prepared. Also, no group played a full-length concert today, which made it a little easier to get ready.”

“We always have a mix of our senior students plus some others,” Fagaly said. “It’s a pretty even mix… The youngest students might feel a little intimidated at first, but they get over that and then they’re all working together for the same goal.”

Ethan Schobernd, an alto saxophone player and junior music major, explained his view as a student in the program.

“It really didn’t impact anything because they’re all amazing musicians,” Schobernd said. “So, the professionalism was definitely helpful. I was shocked by the amazing talent.”

Schobernd’s jazz group, the Jazz Lab Band, had quite a few new faces joining them this semester according to Schobernd.

The next jazz performance is the Jazz Combos show on Oct. 20 in the Black Box Theatre.