Football team to open OVC play on the road 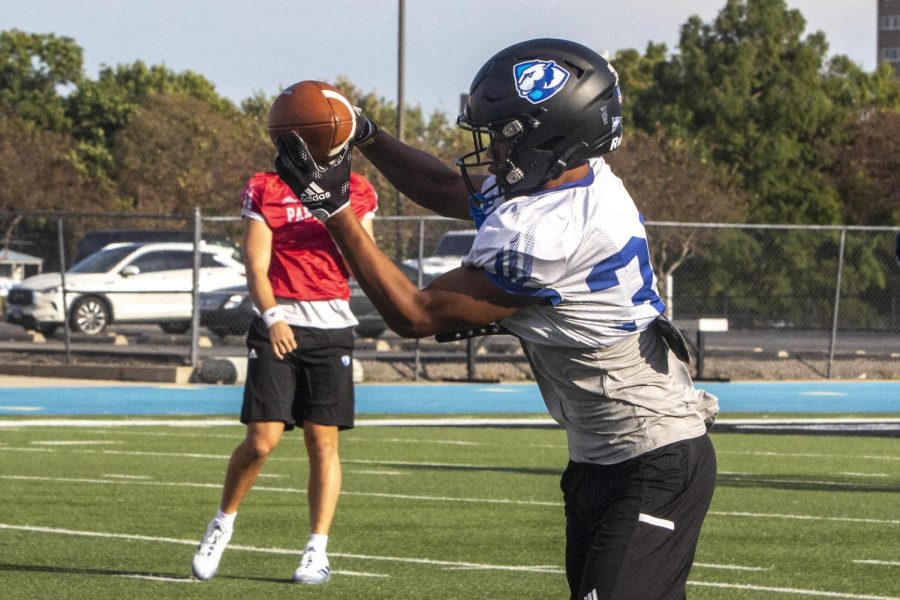 Eastern football head coach Chris Wilkerson said that the team will make every effort possible to take care of the football Saturday afternoon as it will take on Murray State to open OVC play.

The Panthers are 0-3 on the season as they are coming off a 35-7 loss to Illinois State where 21 of the Redbirds’ points were scored off turnovers.

Most of the turnovers resulted from interceptions and fumbled snaps.

“We had some snap issues the other night and we have moved some guys around and we do have an alternate plan if for some reason we are having issues with the snaps,” Wilkerson said. “The most important thing, there were just a couple communication things where everybody was not on the same page, and we had some deflections. So, it was a combination of things, but the kids know we need to take better care of the football and we are going to make sure that we make every effort to do that this Saturday.”

Running back Jaelin Benefield, who ran for 33 yards on eight carries against the Redbirds, is 55 yards away from the 1,000-yard mark for his career. Benefield is second on the team with 124 yards this season.

Benefield said that making changes on offense to limit mistakes all starts with a strong mindset.

“We definitely have, it starts mentally, everything starts mindset first, no matter what it is, especially offensively. We know that we have been beating ourselves so now it’s just more so winning one rep at a time, winning one play at a time and as long as we take advantage of our opportunities and focus on ourselves, everything else will be okay.”

The MId-America Classic last weekend proved to be a physical contest for the Panthers as starting quarterback Jonah O’Brien was sacked twice and so was backup quarterback Zach Weir.

One of the things that Wilkerson has learned about his team through the past three games is that the team is good at handling physicality but needs to execute better.

“We’ve learned a ton, certainly that they are a group that is going to be resilient, they’re going to be very tough, very physical, and we know that we have also learned some things that we need to do at just a little better level,” Wilkerson said. “We need to be a little more consistent in our execution and we know most importantly that we need to take better care of the football. We’ve learned a lot about each other, but we are really excited about opening OVC play.”

The Racers are entering Saturday’s contest also 0-3, having just scored 13 points this season. They have faced off against two FBS programs, Texas Tech and Ball State. Their other opponent was Jacksonville State, a team that is currently transitioning into the FBS.

Jawaun Northington leads the racers with 134 rushing yards. Three different quarterbacks have had playing time this season, but DJ Williams leads the team with 207 passing yards.

Defensively, the Racers rely on Eric Samuta, who is the leading tackler with 24. Samuta is followed by Jamari Dailey with 23 tackles.

Benefield said that the fact that the Panthers are starting on a clean slate in the OVC will be their biggest weapon against the Racers.

Wide receiver Nile Hill is second on the team this season with 12 catches for 111 yards. Hill had seven catches for 41 yards against the Redbirds last weekend.

Hill used to be a safety for the Panthers and his presence on the offensive side of the ball will continue to grow. Hill said that the team tried to pick up their speed during practice this week in order to be ready for the Racers.

“A little bit, we are trying to go back to the basics, ‘master the mundane,’ that’s what our offensive head coach preaches. We are trying to up the intensity and practice really hard so we can be ready for the game speed on Saturday.”