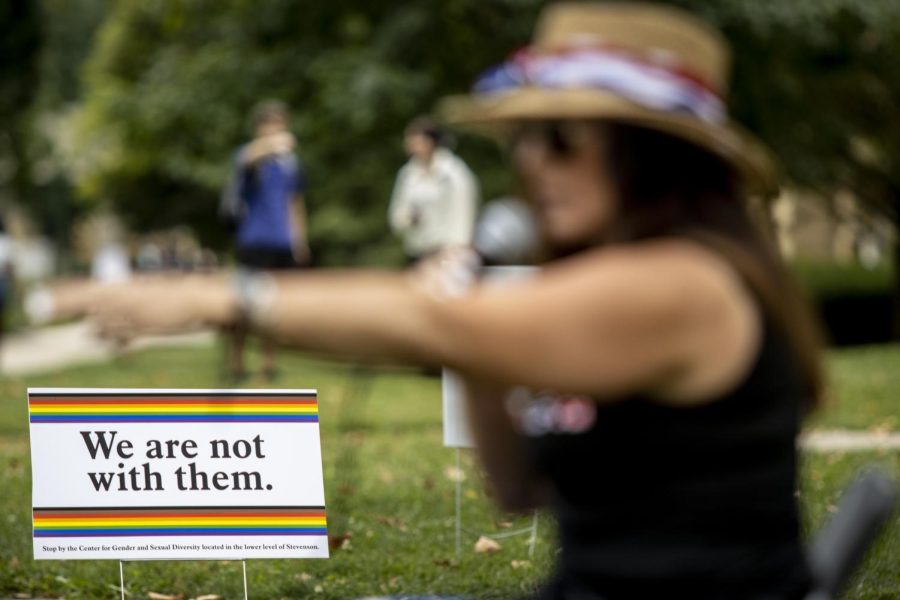 Sister Cindy, a popular evangelical preacher, along with other group members set up station in the Library Quad Free Speech Zone Monday afternoon to spread the word of their God. Students had mixed reactions to the groups' messages. From mocking to arguing to refusal, many students said they had fun. Several students said although they are religious, they don't associate themselves with Sister Cindy's view of religion and God.

George Edward “Brother Jed” died on June 6 at 77-years-old. Since his death, this is the first time his wife Cindy Smock has visited Eastern. Brother Jed and Sister Cindy Smock have a history of visiting Eastern every fall and spring semester dating back to the 1970s.

“We miss Brother Jed,” Smock said. “This is our Brother Jed Memorial Tour because he preached the gospel for 50 years on the college campuses five days a week, five hours a day. So it’s nice to remember what he did. And of course, he led me to the Lord, he disciplined me, and we had done this together for four and a half decades, so I’m carrying it on.”

However, Eastern students have a history with Brother Jed, which is more negative than Smock said.

“Her husband was a nightmare to me, said some very, not nice things to me, but I just wanted to join in on the chaos,” Meadows said.

Other students also disagree with things Smock said while preaching to the campus on Monday and in past visits. Specifically, Smock’s preaches about the sexual habits of women.

Adrian Madrigal, a freshman with an undecided major, said it was unequal for Smock to only call out women present for being “sluts,” even when the men present were trying to be called out by her as well.

“[I didn’t agree with] the whole slut shaming stuff,” Madrigal said. “Especially since it’s targeted towards women, she didn’t say anything about the men. Even though we were literally begging her to, she didn’t say anything about us. I definitely think that there’s a lot of astigmatism around women having sex and not the same amount of astigmatism around men having sex and seeing that expressed here in front of the group people. At the same time, it was fun to do this, but at the same time, we’re giving her a platform to speak on it some more.”

Abby Lowenstrom, a freshman psychology major, also said Smock did not have the right to say negative things about women.

“I came here for a lot of reasons, but a lot of what she said pissed me off,” Lowenstrom said. “She has no right to come up in here telling us like what we can and cannot do as women basically saying that if you have premarital sex, or like kissing people, that makes us sluts. It does not; absolutely not.”

Erika Korte, a freshman music education major, did not agree with Smock’s approach to preach to students.

“She’s just trying to force religion down our throats, and I’m not okay with it,” Korte said.

While many might not agree with Smock’s approach, Smock said she has her own reasons for her approach, but understands why others are not okay with it.

“We believe our approach is very biblical, and there’s actually a YouTube video that explains it,” Smock said. “But it doesn’t bother me if there are sincere Christians that disagree with my approach. And I just say ‘do it the way you think it should be done.’ Jesus said, go into all the world and declare that gospel to every person. He that believes in his baptize shall be saved, he that believes not shall be damned. So what anybody is doing for God, I’m happy. I don’t come out here to defend what I’m doing or argue with other Christians, because I’m wanting to reach people who are lost and don’t tell God. Or maybe people that are weak in their faith and want prayer, or somebody to talk to.”

“I love my religion,” Judeh said. “I learned that I love being Muslim.”

With Smock’s unique approach, which got her famous on TikTok, many students came out to see her on Monday.

Ian Bortz, a freshman history major, said they were curious about how bad Smock’s visits could be.

“Partially I was just curious to see if it was as bad as everyone said it would be but also with the crowd here,” Bortz said. “It’s fun to be around people that are supportive, even though there’s someone spouting hate.”

Students have also had a past of antagonizing and making fun of Smock when she visits Eastern.

It is a common recurrence for two students of the same sex to kiss in front of Smock, students to wear revealing clothing and uniquely for this year, Eastern’s chapter of the Birds Aren’t Real organization.

The Birds Aren’t Real chapter at Eastern is a satire organization about the conspiracy that birds are drones controlled by the government.

The organizer of the chapter, Pascal Friedmann, a graduate student studying business administration research, said their memorial, planned at the same time as Smock’s visit, is for the millions of birds the government kills.

“When it was leaked that the followers of the late Brother Jed (the homophobic preacher who used to come to campus once or twice a year to tell everyone they’re going to hell) would be around on Monday, we spontaneously decided that we should have a memorial at the same time that is truly meaningful, instead of one for a guy who really hasn’t done much except preaching hate in his life,” Friedmann said. “Therefore, we will be holding a somber memorial service for the 12 billion birds mercilessly murdered by our government.”

The memorial also provided a way for the organization to gain more members.

Abby Devore, a junior psychology major, only became aware of the group on Sunday night.

“Well, I didn’t even realize it was a club until [Sunday] night, I got sent the Instagram real saying, ‘Oh, come out and support the protests.’ And I have a friend who is in the club,” Devore said. “I DM’d them… I always love that joke [pretending to believe birds are government controlled drones], and I always thought it was super funny.”

A new way for students to distract from Smock’s preaching was a band set up on the North end of the Library Quad, the opposite side of where the freedom of speech zone and Smock was.

Another popular way, at Eastern and campuses across the United States, that students like to draw attention away from Smock or antaganize her is by arranging to kiss with same-sex friends in front of her.

This is to do with Smock’s preaches about how non-heterosexual relationships are a sin.

Madrigal said he and a friend, along with two other friends, planned to kiss in front of Smock beforehand.

“My friend, he was like, ‘Oh Sister Cindy’s coming to town, she’s going to come to campus. We should go kiss in front of her as a joke,’” Madrigal said. “Actually, we got a video of it, and me and him went on one side and our two other friends both kissed on the other side. And we caught a video of it.”

Some students even tried to ask difficult questions. Lowenstrom said they would ignore and go off topic instead of answering people’s questions about believing in Jesus Christ and God.

“I found it hilarious whenever people would ask the difficult questions, and they didn’t know how to answer it,” Lowenstrom said. “So they were stuttering the whole time and then they trailed off. And started talking about something completely different than the topic that was brought up for that was hilarious to me.”

Although with this being the Brother Jed Memorial Tour, Smock said students have become “cold-hearted” due to jokes about Brother Jed’s death.

“Some students are really more cold hearted; they were making fun,” Smock said. “There were several of them making fun of Brother Jed passing away. And then also Jennifer’s husband died of a drug overdose, and some guy just yelled out ‘Good.’ So there were some of them that were very negative and confrontational. And I don’t care how much I disagree with you or anybody else. I’m not going to wish you die or your loved one dies. It’s pretty cold hearted.”

For many of the attendees, what Smock preaches and says is for attention. Meadows said Smock is only traveling to college campuses preaching for attention.

“She just wants the attention, and we shouldn’t really be giving it to her best in time,” Meadows said. “It’s also kind of fun to poke fun at her.”

Bortz said attendees counteractions in response to what was being preached against sexual identities besides heterosexual and shaming specifically women about their sexual habits.

Bortz only had one last thing to say about Smock’s visit to Eastern, which was written on one student’s sign in protest of Smock, “God loves sluts.”