Songs, skits, plays made within 24 hours at Doudna Saturday 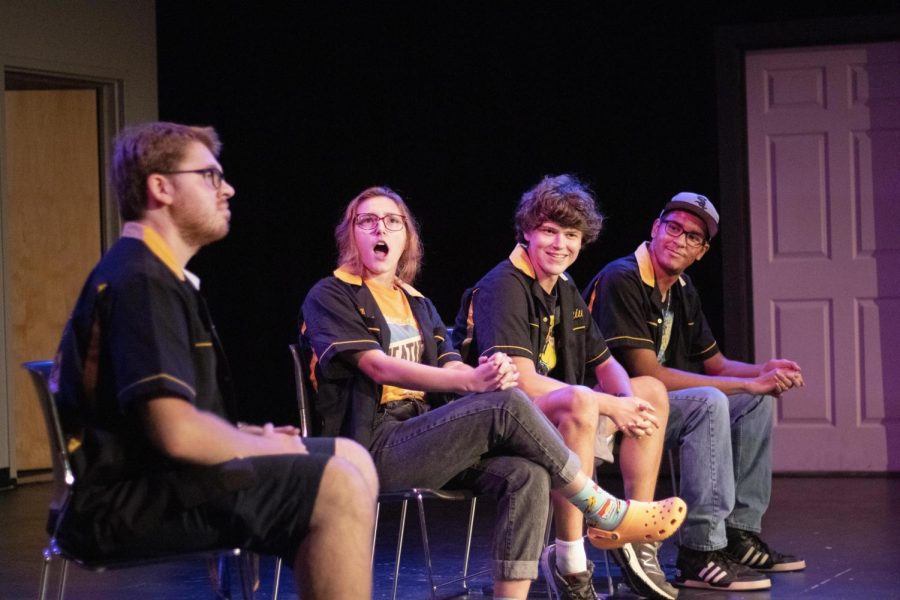 Members of the Hello Dali improv comedy show end the Up All Night performance with a piece where the contestant has to guess what person or object the other three members are by asking them a series of questions.

The annual Up All Night Performance Festival returned to Eastern, showcasing a variety of student performances prepared within 24 hours on Saturday night.

All was quiet in the Doudna Fine Arts Center, everywhere except for the Globe Theater.

Inside the small theater, the lights were dim, music was playing from speakers, and dozens of Eastern students and faculty sat in their seats, waiting for the show to begin.

The audience was so large, in fact, that the theater was filled to full capacity.

This year’s Up All Night Performance Festival featured a variety of student-created performances, including comedic skits, heartfelt songs, powerful plays and more.

These were performances they only had 24 hours to prepare for.

Nicholas Shaw, the chair of the theater department, was one of the organizers of the performance festival.

He said he helped make sure all the tech was set up in the theater and provided support to the student performers.

He said he was happy with how many students participated in the festival.

“This was easily our largest turnout for performers and participants,” Shaw said. “We had about 30 students who helped out in various ways. Probably previously, our biggest would have been around 20, so we have about 10 or so more students than we had in the past.”

A performance of the song “She Used to be Mine” from “Waitress.” A play about the struggles of mental illness.

A parody of “Hamilton.”

A performance of a scene from “A Few Good Men.”

The night featured many different performances, something for everybody to enjoy.

The night was full of laughter, cheers and applause, with many of the audience members engaged in the performances.

Shaw said he was happy with the turnout.

“The turnout was great,” he said. “We had about 50 audience members, which again is a good number, and then they seemed very engaged the entire time, which is great.”

Hillary Gonzalez, a freshman criminology major, said that this was her first time attending the festival, and that she did so to watch a friend perform.

“My friend was in it,” Gonzalez said. “She invited us, and I was kind of stoked because I kind of want to try new things.”

She said that she loved all the performances, but her favorite of the night was the one her friend was in, a student-written comedy play titled “I Was in the Office at 3 AM (Do Not Attempt).”

The play featured a character filming herself as she broke into the office at 3 a.m., talking excitedly and making jokes about the experience, referencing the YouTube videos influencers make in which they spend the night in places such as libraries and stores.

Suddenly, a cloaked man came in and killed her, only to take her phone and promote a brand of wireless earbuds, similar to the way in which content creators promote products during their videos.

“I absolutely love that one,” she said. “It’s kind of true, the one that my friend was in, because a lot of YouTube videos are like that.”

Kyle Carlen, a senior management major, said he attended the festival because his friends told him he should check it out.

He also said he did so because of his love of music, saying that he mainly plays rock and roll music and is in a band.

“On the side, I do a lot of music and stuff, so I’m always on the lookout for people wanting to kind of do the same thing I do,” Carlen said. “I’m always looking to kind of branch out of what I’m used to get out of my element and kind of see what else is out there.”

He said he was very impressed with all the performances, “especially with the time that these people had to prepare it.”

He said his favorite performances were the comedy acts and that he particularly liked Hello Dali’s performance.

In “The Dating Game,” one member of the group played a contestant and three others played the eligible singles.

While the contestant was away, the audience helped give each bachelor or bachelorette a specific person or object to play.

The contestant returned to the stage and had to ask the singles questions to figure out who or what they were.

Of course, he also had to choose who he would rather go on a date with.

The second game, “Try Again,” had two contestants play out an improvised scene.

Every time somebody yelled “try again,” they had to change the last thing they did, changing the direction of the scene.

“They did really good with kind of on-the-fly subjects like they just showed up and took audience input and were able to just roll with it,” Carlen said. “That was very impressive.”

Shaw said that performance festivals like Up All Night are a great opportunity for students to share their creative work in front of an audience.

“This is a really great sort of workshop experience,” he said. “You can write a script, but until you hear people say it out loud in front of an audience, you don’t really know necessarily what works and what doesn’t work. This is a really great first stage for a work like a play or a skit or something.”

Shaw encourages students interested in performing to do so.