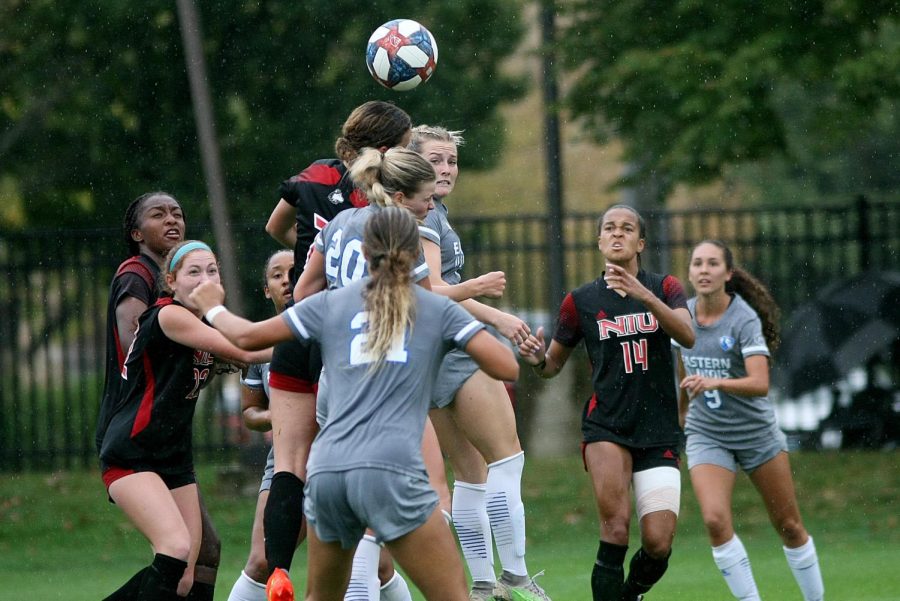 Players attempt to head a ball during the Sunday afternoon soccer game between the Panthers and Northern Illinois University Huskies at Lakeside Field. The Panthers lost 2-1 against the Huskies.

The match remained scoreless after the first half, but when the second half started things started to get intense. The rain started falling, the field got slippery, and the shots started to go in.

NIU scored first 41 seconds into the second half. NIU’s Madison Looby kicked the ball right into the goal after EIU’s Daniela Bermeo just missed the save and the EIU defenders were unable to get the ball out of the box.

20 minutes later, the Panthers answered on a corner kick with a goal by Karima Rangel, who scored her first goal of the season, as well as her first goal of her collegiate career. As a junior, she is excited that she has reached this achievement.

“I’ve been waiting and hungry for this moment. I hope I can keep contributing more goals to help the team,” Rangel said.

The game changed as the rain fell during the second half. It is a game changer for any team as more falls and injuries are prone to happen. Since Lakeside Field is a grass field, it has more negative effects than a turf field would.

Both coach Jake Plant and Rangel said that the rain makes the game more challenging and affects the game for both teams.

As the rain changed things up for the Panthers and the Huskies, both teams were still physical as the game went on.

The Panthers played a tough game and battled their way to the end. NIU scored one more time to take the lead with 10 minutes remaining. The ball slid past the defenders and Bermeo to the left side of the goal.

Bermeo, who is one of the top goalkeepers in the NCAA right now, recorded six total saves. Both Rangel and Plant are excited for Bermeo and all of the recognition she has gotten. She has received Ohio Valley Conference goalkeeper of the week two times in a row.

“I’m excited for her. It’s comforting knowing that we have one of the highest-ranking goalkeepers in the nation as our last line of defense,” Rangel said.

“It’s been a long time coming for Dani. We love her to death. She puts the work in,” Plant said.

Plant noticed how tough his team played Sunday afternoon and looks forward to working on things as they move on to play next Sunday at Central Michigan.

“[We will] just tweak some things in practice; overall, just get back to the details that we do really well,” Plant said.

Rangel says while it was not the result they wanted for the game, they are ready to push forward.

“It was a good, even match and it’s a good learning moment to build off of with conference coming up soon,” Rangel said.

As EIU recovers from this slippery game, they will prepare to travel to Michigan for an afternoon match versus Central Michigan next Sunday, Sept. 11.