Four athletes to watch this fall 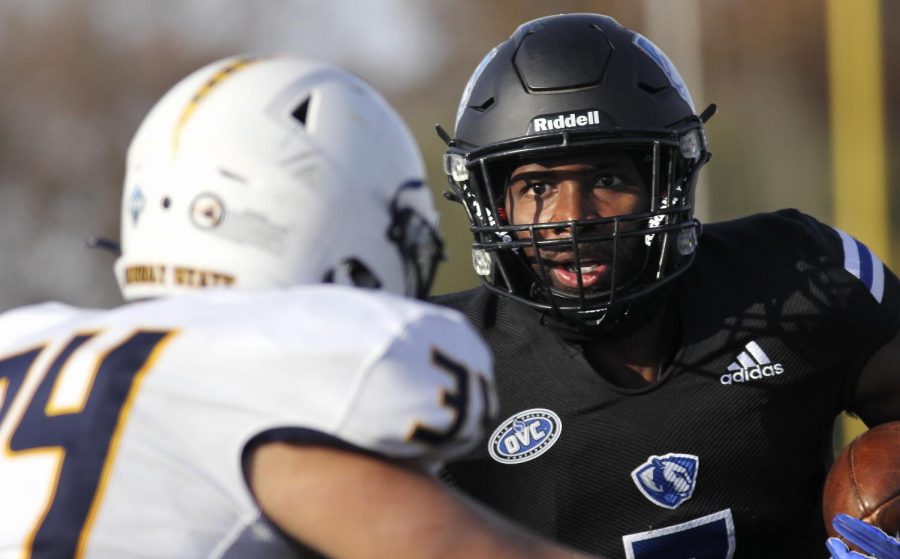 Redshirt junior wide receiver Isaiah Hill runs the ball at the Nov. 20 football game at O’Brien Field. Hill had 13 catches for 110 yards. The Panthers lost 20-13 to the Racers.

The beginning of fall sports on campus is a reminder that there are many things to look forward to in the next four months. Not only are there two new coaching eras, but there are four athletes whose talent is worth taking note of.

Football is one of the two fall sports that will enter the season under a new era. Head coach Chris Wilkerson will unleash the new Panther football era on September 1 against Northern Illinois.

One athlete to look forward to this fall is redshirt senior wide receiver Isaiah Hill. Hill will play a huge a key part of the Panthers’ offense this season, assuming that he can avoid injury, which has plagued him in the past. Hill transferred from South Dakota State in 2019. He was able to play eight games that season. In those eight games, Hill led the team in pass receptions with 58 for 571 yards. He was 31st in the FCS in receptions per game at 7.5 which ranked sixth on the EIU single season list. His performance earned him a spot on the All-OVC Newcomer Team.

Last season, the women’s soccer team was 4-11 overall and 2-5 in the OVC, earning them the eighth seed in the OVC Tournament. The Panthers were knocked out in the first round by fifth seed Tennessee Tech. This season, fifth year midfielder Amanda DaSilva will return for her extra year of COVID eligibility.

Soccer is the other sport that will be entering another era this fall. Mattoon native Josh Oakley took over as head coach in June. Oakley will kick off the new era on Thursday against Green Bay.

Last season, the Panthers were 2-12-1 overall and 1-5 in the Summit League. This season, the player to watch is graduate student midfielder Chad Hamler. Hamler has improved within the past two seasons. As a junior, Hamler started all 11 matches and recorded a career-high .556 shot-on-goal percentage and led the team with two assists.

Last season, Hamler started in all 15 matches and was second on the team with 14 shots, including six shots on goal. Hamler’s season high for both shots and shots on goal came against St. Thomas.

The 2022 volleyball team will be searching for redemption this season with the help of senior setter Summerlyn Smith. Last season, the Panthers finished eighth in the conference with a 4-14 record and an overall record of 11-18, earning them a spot in the OVC Tournament. Their first tournament appearance since 2017 would end in a first-round defeat after losing all three sets to No. 1 seed Southeast Missouri.

Smith joined the Panthers from Parkland College where she helped the team win back-to-back Mid-West Athletic Conference championships. Smith also earned NJCAA All-American honors with 1,080 assists during one of her two seasons and finished her JUCO career with more than 2,00 career assists.

As a junior setter last year, Smith appeared in all 29 matches, earning a first-place spot on the team with 785 assists and 7.20 assists per ser ratio. Her season high in assists was 53 against Tennessee State where she also posted six double-doubles and 14 digs. Smith finished third on the team in digs with 183 and was the fifth setter in the conference in assists.