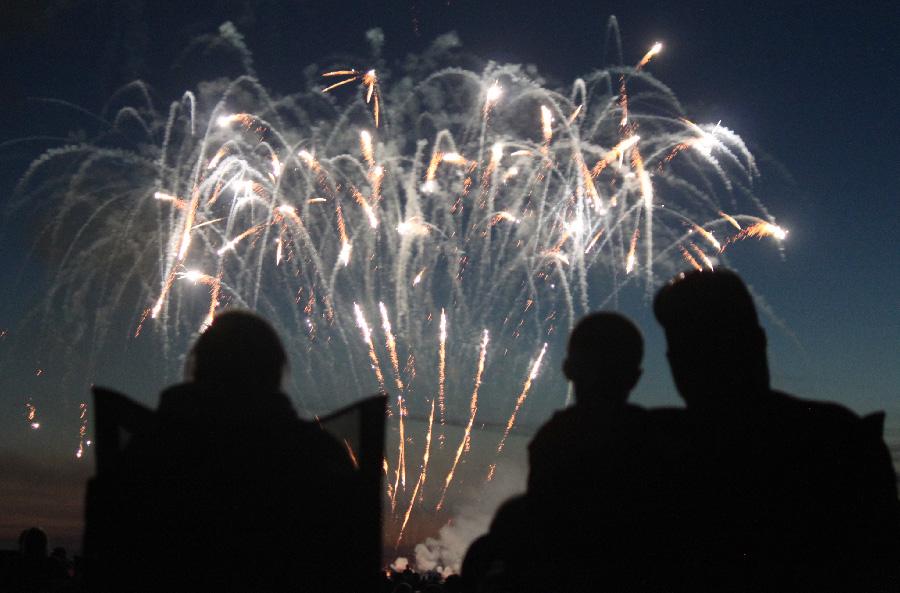 Jeff Riggs, his wife Kristen Riggs and their son Caleb Riggs watch the fireworks display at the Coles County Airport July 5, 2014 as part of Red, White and Blue Days.

Bruce Springsteen Tribute Band, Bruce in the USA will be performing as the main act for the 31st Annual Red, White and Blue Days on Sunday.

Lead singer Matt Ryan, along with his band, will be performing a note-perfect and visually accurate recreation of a Bruce Springsteen & The E St. Band show.

Ryan began playing the Springsteen character in 2000 during the Legends in Concert show.

His success then led him to perform worldwide; eventually, in 2004 he evolved his character into the Bruce In The USA show.

Red, White and Blue days will start at 9 a.m. on July 2, with the Second Annual RWB Car & Bike Show.

In line with the Morton Park regulations, only nonprofit vendors are allowed; several of these include the Knights of Columbus, the Masonic Lodge, 9 Muses, the Charleston Rotary Club, the American Legion and more.

There will be a $3 all-you-can-eat ice cream buffet, inflatables, games and activities.

At 4 p.m., families are invited to participate in Joyful Bubbles to fill the sky with hundreds of big and small bubbles.

The free concert will start at 6:30 with Rick K & The Roadtrip opening with an intermission for announcing the Famer of the Year award, with the main act starting at 8 p.m.

The American Legion Pancake & Sausage Breakfast will start at 7 a.m. and last till 11 a.m.

The breakfast will be at the American Legion Post 93.

The Coles County Arts Council Chalk-In will start at 9 a.m. and all ages are invited to decorate the streets of Pierce and Division.

Prizes will be awarded to different categories based on age: six years and younger, seven to 10 years, 11-14 years, 14-18 years and 18 and up. There is a group category for those wanting to work with friends and family. The “Most Patriotic” award can be presented to anyone no matter the category.

Following the chalk art, a pet parade will take place at 9:30 a.m. at Morton Park in the westside gazebo near Division Street.

All dogs should be on a non-Flexi leash and other animals must be appropriate carriers.

All youth participants must be accompanied by an adult.

Pet owners are responsible for their pet’s behavior and are required to clean up after them.

Female pets who are in season are not allowed.

Contestants will be judged by Charleston Police K9 Officers with prizes for all participants. Costumes are encouraged but not required.

Vendors, games and activities will open at 10 a.m. and close at 4 p.m.

The Fourth of July Parade begins at 1 p.m. at Charleston Square, then will head south on 6th St. to Polk Avenue, then west to Division St., then south towards Morton Park.

Following the parade at 2:15, the local VFW color guard will present a traditional 21-gun salute with two guests ringing the liberty bell.

He is heavily involved with the Charleston Legion and recently retired after working 60 years as a dentist in Charleston.

Betty Coffrin, a Charleston event committee member, said they wanted to honor the small businesses around town that provided prizes and support for the festival.

Closing out the celebration, at dusk at the Coles County Airport, the free firework show will take place.

Gates will open at 4 p.m. and a shuttle service is available at 5 p.m. at Mattoon Cross County Club and in Charleston at Eastern’s O’Brien Stadium. If you are driving, you will enter where you exit.