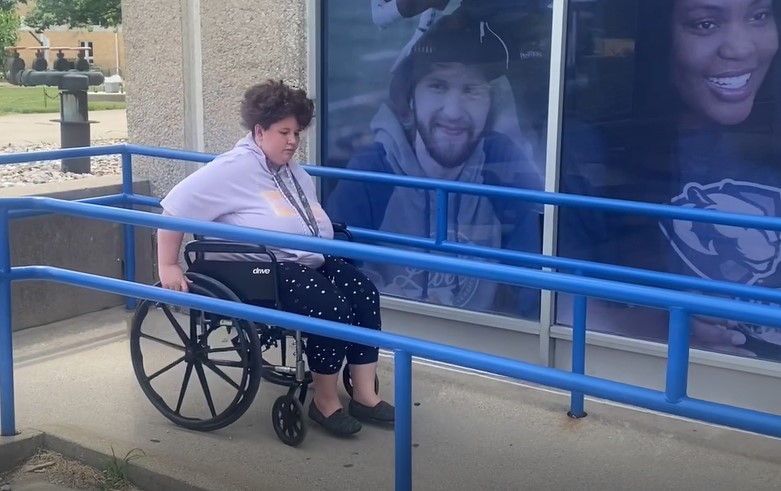 Ci Richardson, a senior music education major, wheels down the Stevenson Tower ramp while slowing themself down by holding onto the railings on Thursday, June 9.

Ci Richardson, a senior music education major who relies primarily on a wheelchair to navigate, is frustrated with the lack of disability access at Eastern.

Richardson has used a wheelchair and cane for mobility for more than two years and faces several accessibility issues on campus.

Richardson has been diagnosed with Polycystic Ovary Syndrome, chronic pain from the pelvis up and anemia. They also have two bulging discs in their lower back and along with these diagnoses, it makes it difficult for them to walk far distances and stay on their feet for extended periods.

Admins say they are open to hearing from students on places where they can improve but that doesn’t matter to Richardson.

“It’s just kind of frustrating because I know I’m not the first one to acknowledge it, but I definitely won’t be the last,” Richardson said.

Richardson eats at Thomas Dining several times a week during the school year; while ramps lead up to the doors, none of them have push-to-open buttons making it harder for students like Richardson to access the dining hall.

Richardson said it’s frustrating because they can’t go through a door without it hitting their chair; they compared it to someone who is able-bodied opening the door and getting hit while walking in.

“Just imagine like the door hitting you several times when you’re leaving and when you’re going in,” Richardson said.

Over the past five years, Eastern has had 4,958 on-campus students enrolled in the fall. Of those students, around 300 are documented by Disability Services, making up around 6 percent of the on-campus student population.

When Richardson would go to hang out with friends at the Union, they would have to call friends to let them in because of a locked door.

Living in McKinney Hall last year, Richardson said simply going to Doudna across the Library Quad was a time-extensive task.

“It takes so much time and energy to get across to Doudna from McKinney that I wasn’t able to practice piano as much as I needed because I would be exhausted from navigating potholes,” Richardson said.

As EIU Pride’s president last semester, Richardson said they are lucky enough to know people, but is concerned for those whose voices aren’t heard.

Jackson said the department relies on gathering information from students and community members to issue a report.

Mark Hudson, executive director of Housing and Dining said he knows several places on campus that need better accessibility and wants to do a large-scale construction project but has to manage funds.

Similar to Jackson, he wants to hear from students and compile a list of ways to make campus more inclusive to fulfill Housing’s goal to allow students to live anywhere on campus and not face any barriers.

“We always want to try to make sure we’re doing things that allow people the most easy access possible,” Hudson said.

Richardson suggested smoothing sidewalks and other general considerations like push-to-open buttons to help those with disabilities.