Former Eastern dean will be remembered for ‘disarming’ personality 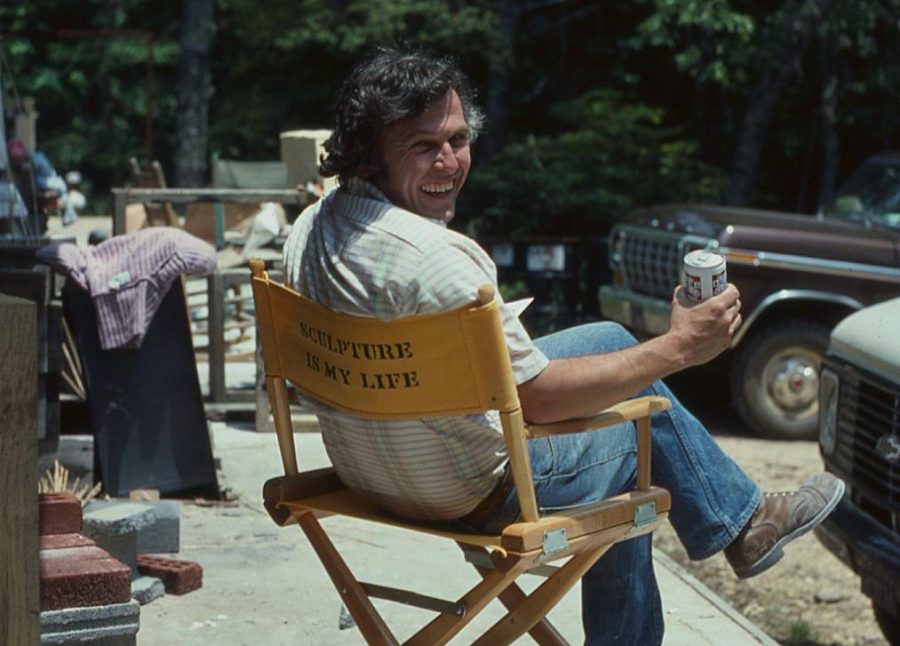 Jim Johnson sits in a Hollywood-style director's chair that says "sculpture is my life." Johnson spent over 40 years of his life devoted to the art of sculpture.

Jim Johnson, a former Eastern dean and artist, who oversaw the construction of the Doudna Fine Arts Center, died May 7 at home after a long illness.

Blowing glass, casting bronze, and constructing towering exhibits, Johnson was an accomplished sculptor, with a career spanning more than 40 years.

After retiring in June 2009, Jim returned to his art, as everyone expected, continuing his large-scale sculptures.

In his artist statement, he said his drive with creating art was to cause the viewer to pause and reflect upon their surroundings and become more aware of the environment around them.

“He loved being part of the university, and he loved going. Never missed any of the events for the students,” Kirby said. “Thoroughly enjoyed working with the students and professors and going to all the events.”

Early in their relationship, he took her to visit his parents; after leaving, it started sleeting.

She sat on his lap, leaning outside the window, scraping the window off so he could see. Jim told her years later, at that moment, he knew he wanted to marry her.

They both taught high school until Jim was drafted during the Vietnam War in 1966, stationed in Frankfurt, Germany, doing intelligence work.

While serving in Germany, Jim saved his allotted free time, waiting to use it to spend it all with his wife.

Wanda recalled one of her favorite memories with Jim was traveling across several countries in Europe and having him teach her about art.

On the first night, to avoid paying motel costs, he had picked up a tent.

While seven and a half months pregnant and visualizing a spacious temporary home, Weber said she let down when he pulled out a small bag with a pump.

“I thought, how the heck am I gonna get in there,” Wanda laughed. “That was funny because for the first night we were kind of floating all over the place.”

Throughout the trip, knowing next to nothing about art, he explained all these famous artists; she said she knew Jim was different for his passion for art and his family.

After completing his service, he completed his Master’s in Fine Arts at the University of Kansas, later teaching sculpture at Arkansas State University for around eight years.

In 1978, he accepted the position as chair of the art department at Eastern, where, after 15 years, he took the position as dean for the new College of Liberal Arts and Humanities.

Lynch took note of Johnson’s humor and inability to speak fluently in public.

He paced while practicing the pronunciation of the name of a Chinese scholar and diplomat he would introduce to a large audience in the Student Union.

Lynch wrote in Johnson’s eulogy: “I could see that look in Jim’s eyes which said ‘OMIGOD, I’ve just caused an international incident.’ Jim was at first embarrassed, of course, but then saw the humor … eventually … after like several weeks.”

While Jim served as dean, several buildings were erected: the Burl Ives Studio house, The Tarble Arts Center and, most notably, the Doudna Fine Arts Center.

With his experience in sculpture, he was in his element when the Doudna project started in 2000.

Paying every attention to detail, he wanted the building itself to be a work of art.

After landing an architect he admired, Antonie Predock, an architect from New Mexico, he saw his vision be completed eight years later.

Johnson was a family man who made efforts to make sure his family was cared for.

Although his health declined, on Valentine’s Day, he wrote a card for his wife, expressing how he felt about her.

One of Brent’s favorite memories with his dad took place in the mid-1980s when he was 14.

Brent desperately wanted a pair of Air Jordans but couldn’t get them in a small town like Charleston, so, to get them, he went with his father to a conference in Detroit, Michigan.

Throughout the day, they took buses touring the town, eventually going to a shoe store to buy Brent his adored shoes. They then went to a Tigers-Orioles game that lasted until midnight.

After the game, the two decided to go back to the hotel to get some food, but with no cabs or buses available, they decided to walk. While walking back to the hotel, a group of kids rolled out of an alley, but his dad kept calm and kept walking, so he followed. While sitting and eating, Brent was reminiscing about how exciting the game was; little did he realize at the time, that the same kids from the alley were in the booth next to them.

“I just wasn’t paying attention and I look over at Cal Ripken Jr. and I didn’t even recognize that he was there,” Brent said. “My dad wasn’t a huge Orioles fan, but he knew who they were and we ended up talking to him, and he let me hold his ring and stuff.”

Kirby said he will remember the trips and hardware projects he completed with his dad.

Owning Fourth Street Records, now known as Positively Fourth Street, and Gavina Graphics, he said his dad helped him build the CD racks, put in a new hardwood floor and completed other projects at Fourth Street.

Brent said the way his father carried himself will stay with him.

“Whenever I become impatient, I think about him and try to think about how he would handle himself because we’re all sort of wired a certain way,” Brent said.

Jim faced a “rougher” childhood, said his children, traveling for the first seven to eight years of his life before settling in Kinsley, Kansas. Having grown up in the Great Depression, his father had a stern, disciplinarian style of parenting.

Brent said unlike his father, Jim wasn’t as fiery, and, despite having three rowdy sons, his father never lashed out or yelled.

“I suppose my dad made an effort early on to not be quite as domineering,” Brent said. “He never raised his voice, and we were really a pain.”

His children said they never heard their dad speak ill of anyone or anything.

Many labeled Jim as disarming to those who didn’t understand his easy-going personality.

“This is not an exaggeration, but he never, never spoke poorly of anyone,” Brent said. “I have a hard time recalling him coming home and complaining about anyone, he just didn’t.”

Rob Le Cates is a sophomore journalism major. He can be reached at 581-2812 or at [email protected]