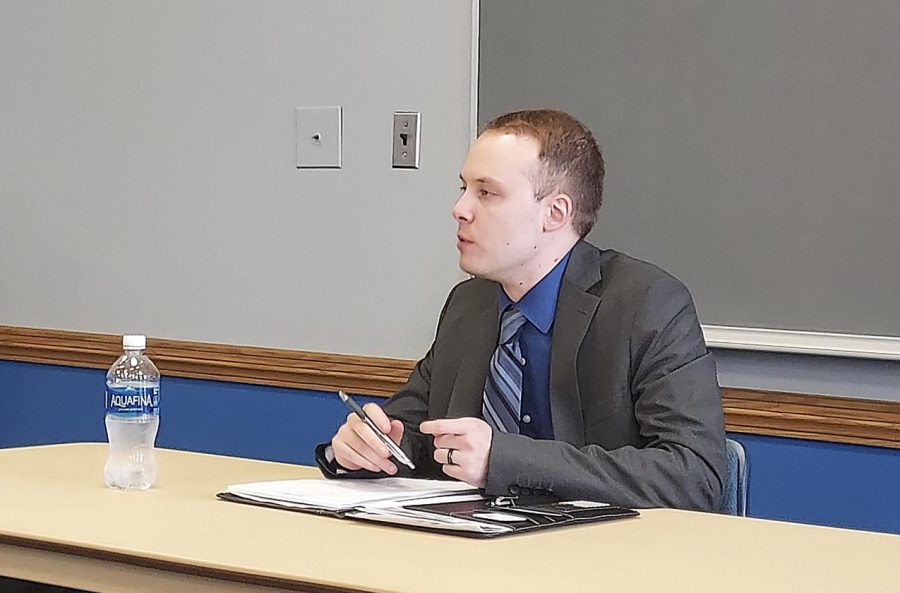 Daniel Fox, one of four candidates for the position director of the Martin Luther King Jr. University Union, answers questions by Eastern faculty during the open session on Wednesday afternoon in the Oakland Room in the Union. Fox spent Wednesday on Eastern's campus meeting administration, touring campus and being interviewed.

He will start on June 6, taking over for Cathy Engelkes, who will leave Eastern on May 31, after 45 years.

Wanting to start strong, Fox plans to build connections with figures across campus as soon as he arrives..

Coming to Eastern, he said he is excited to get back to a smaller community, like when he attended college.

Fox visited Eastern in April and answered questions from Eastern community members and said he wants to bring a why mentality with him.

Fox graduated from the University of Central Missouri with a bachelor’s degree in broadcast media, then pursued a master’s degree in college student personnel administration.

After graduating, he held several leadership jobs at state institutions for more than eight years.

Before Eastern, Fox worked as the assistant director of facilities and operations at the Plaster Student Union at Missouri State University for more than six years.

In addition to his position at MSU, he served as assistant director of the Memorial Union at Fort Hays State University for more than a year, and for more than two years he held multiple supervising positions at the University of Central Missouri.

Student Body President Lucy Ade said she has heard amazing things about the new director and thinks his skills in working on online scheduling will prove very important.

At Missouri State, Fox oversaw facility improvement projects with the development of a $450,00 esports complex, a $400,000 upgrade to the student theater and a $350,000 building-wide furniture replacement project.

In addition to these projects, last year he assisted with a $1.2 million project to expand MSU’s Office of Student Engagement and Multicultural Resource Center.

He held a variety of volunteer roles for the Association of College Unions International, most recently as the Region II Membership Coordinator.

Fox said he and his wife, Ashley, feel for the small-town atmosphere, love the comfortable connections and can’t wait to come to Eastern in the coming weeks.