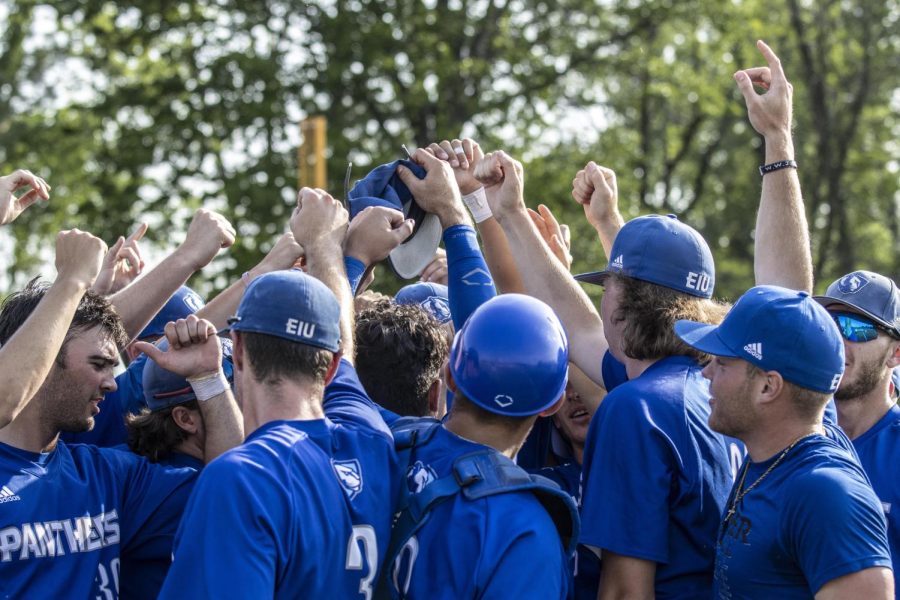 The Eastern baseball team concluded its regular season over the weekend after taking the series win over Southeast Missouri, setting the stage for the OVC Baseball Championship on Wednesday.

The Panthers earned the fourth-place seed in the OVC with a conference record of 11-12 and are set to play the winner of game one between #5 SIUE and #8 Austin Peay at 4 p.m.

The Panthers will either face the Cougars or the Governors, whom the Panthers won the series against both teams earlier in the season.

Before the stage was set, the Panthers kicked off their last OVC matchup with a doubleheader last Friday, losing game one 4-6 and winning game two 7-5. Game one was led by senior infielder Dalton Doyle, who went 2-for-3 with a homerun and 3 RBIs. On the mound, Trevor Nicholson threw six innings while allowing three runs and striking out four.

The second game of the doubleheader spelled a different ending. Doyle once again led the Panthers after going 2-for-4 with two RBIs. Sophomore right-hander Hayden Birdsong had a stellar outing for the Panthers as he struck out eight while only allowing no runs.

The last game of the regular season was cut short to six innings due to weather, but the Panthers pulled through with a 5-1 win. Junior utility player Ryan Ignoffo was successful at the plate, going 2-for-3 with an RBI. Ky Matthews Hampton got the win on the mound, allowing one run and striking out three for the entirety of the game.

The third-place seed belongs to Morehead State with a record of 14-10 and they will play the winner of game two between #6 Tennessee Tech and #7 Murray State, both entering with an 11-13 record.

Head Coach Jason Anderson said that going into the tournament, the focus for the team is simply playing to the level that they have all year.

“We’re just looking to play good baseball. I mean, it’s what we’ve done every game this year, just trying to play as good and as hard as we can,” Anderson said. “Sometimes you win and sometimes you lose, but we’ve won more than we lost. So really, it’s just play good and play hard.”

Redshirt-senior Nathan Aide said that winning the conference is the ultimate goal for him and the rest of the team.

“I am looking forward to the opportunity to win and win the conference and that’s really the goal at the end of the day,” Aide said. “Other than that, that’s really all that’s on my mind.”

Autumn Schulz is a junior sports media relations major. She can be reached at 581-2812 or [email protected]