COLUMN: “Sonder” is a testament to student creativity, filmmaking 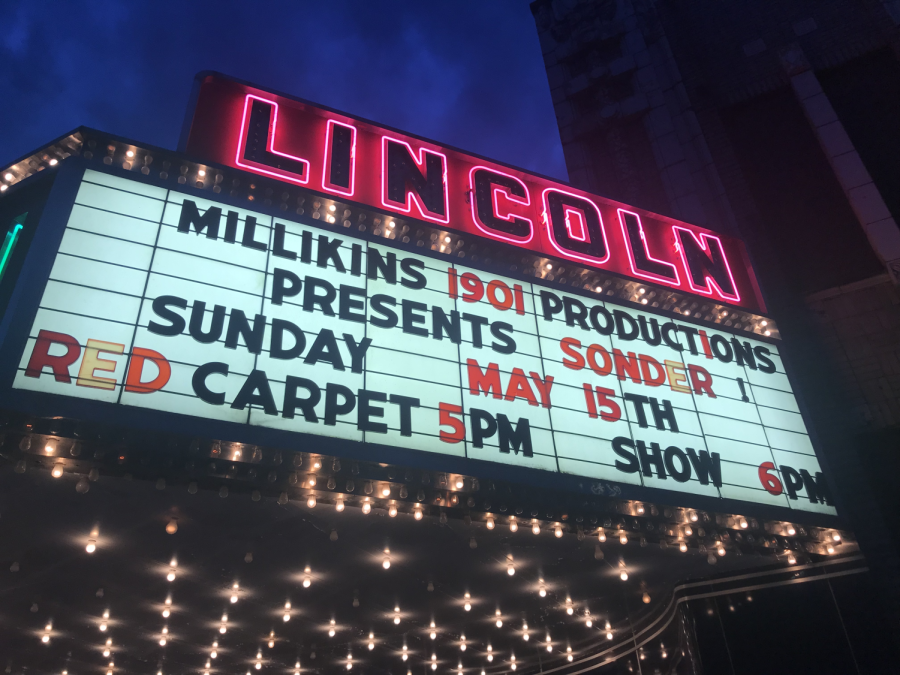 This weekend I had the opportunity to attend the premiere of “Sonder: An Anthology of Loss,” along with my roommate whose friend was involved in the production.

The premiere, which was held in the Lincoln Square Theater in Decatur, and the film itself were put together by 1901 Productions, a student organization from Millikin University.

I want to emphasize this before my review: my critiques mean nothing against how impressive it was to see what these students put together. If I hated the whole thing (which I didn’t), that completely shouldn’t matter to anybody involved.

I offer this review because I love the art of filmmaking and enjoyed watching this anthology. If anything I say is useful, I’ll be overjoyed.

Each part of the anthology had the students fulfilling different roles in the production and had an entirely different plot, so I’ll review each individually. Buckle in- I have a lot to say about each of them.

I’m also overlooking issues which were clearly just due to budget. For example, all four parts of the anthology had parts where the audio quality was poor because student filmmakers don’t have access to the number or quality of microphones which they might want.

This piece followed a young woman who experienced something traumatic on her favorite running path and is learning how to deal with that event. She told her friends something happened, but not what it was, and is unable to talk about it. Two characters in her mind, like an “angel” and “demon” on her shoulders, usually disagree on the best course of action for her to take in each scene.

Some of the strongest parts of this segment were in the main character’s interactions with her friends. Her fragile mental state made her withdraw at times and lash out at others as she listened to those two inner voices, creating a realistic portrait of the fallout from trauma.

The script felt very natural for the most part and was well-acted, making each character easy to connect to.

Not knowing exactly what happened to the main character worked well; assumptions could be made from the location and her decision not to tell anyone, but there was no need for it to be spelled out for the audience.

It was interesting that the two inner voices weren’t exactly traditional “good” and “bad” voices; one seemed to want to work hard and keep up with school while the other was more interested in ignoring work to deal with whatever happened. Neither is portrayed as a right or wrong answer, even when one impulse causes the main character to lash out; both are just natural reactions to trauma.

Unfortunately, a late-story reveal kind of threw that dynamic for me. At the end of the piece, the main character returns to her favored running path, showing how she’s healed since being in therapy. She finds another of her inner voices, revealed to be “Hope.”

Finding hope after trauma is a beautiful story. However, this inner voice being named instantly made me wonder what emotions the other two were meant to represent when I don’t think they were necessarily intended to be that specific.

The main character’s hobby of running also played a large role in visual storytelling, which worked well but did end up creating some shots that weren’t very strong as there wasn’t a way to steady the camera while following her. Using wide but steady shots would’ve been preferable.

I also feel that the ending may have been stronger if it was more ambiguous- which I usually wouldn’t say. Open-ended stories are often weak, but I think that having her run down the left path, resolving the issue from the opening scenes, would’ve been enough. The audience could’ve been left to decide what happened to her and project whatever they wanted.

The Sword and the Stone

The second short film featured my favorite concept. It was kind of wild, combining the corporate satire of “American Psycho” with the Arthurian mysticism of “The Green Knight.” (Lofty comparisons, I know. I really enjoyed the story.)

The main character, an archetypal businessman who works too much for his loving wife, shows up at his job one day and hears the latest gossip: a sword, sheathed in a stone, has appeared in the woods near his house. Percy’s coworkers hype him up, convinced he’ll be the one to pull the sword free. After work, he tries and fails to do so, then continue trying late into the night. Percy is convinced the sword belongs to him and becomes obsessed, losing his wife and ignoring his job in favor of trying to take it…. Until one day, the sword is already gone. He hears voices in the stone which tell him who took Excalibur, and he goes to take it from his house. He ends up killing the man, then returning to the stone, sword in hand, to gloat. The Lady of the Lake appears to him, revealing that he was meant for greater things than the sword; she holds his true destiny, the Holy Grail.

This whole short film, despite the serious layers of drama and obsession, is played mostly comedically. This typically worked well, but sometimes became a bit much as Percy would be very serious in a scene next to the rest of the characters who sometimes took on the energy of an over-zealous comedy improv group. More subtlety in some of these scenes would’ve done the story overall a lot of favors.

The soundtrack throughout most of this segment was orchestral and full of drama, what I imagine the score would’ve been if this was told as the original myth- except for a “training montage” of Percy trying to get the sword and some dramatic “horror” music during the fight scene. This added a layer of humor to scenes where the characters gather around a conference table in their business attire.

As Percy obsesses over the sword, he moves his armchair to face out a window toward it. Multiple shots show him framed in that window, leaning forward in focus. I loved this; the symmetry was great, but the visuals also made me think of some kind of mythical king, tortured by the one thing he couldn’t have.

One thing I’ll nitpick here, which also appeared in other parts of the anthology: People don’t usually talk out loud to themselves with full context; they usually only say one side of a conversation because they are one person. If they do it on screen, it feels unnatural. Percy kept repeating what the voice was saying to him instead of just answering it, and it frustrated me as the story reached its climax.

This segment began with a reflection on many students’ lives during the pandemic. The main character’s grades are failing as he stays in his room all day, enrolled in online classes. He finds himself dissociating through the day, unable to remember what he did. When he realizes he’s out of medicine, he decides to do without for a while. That’s when he starts hallucinating as he dissociates, and even sometimes when he’s otherwise lucid. A masked figure who claims to be the manifestation of his fears and negative emotions starts appearing to him and revealing memories the main character seems to have blocked due to trauma.

The advantages of mainly working with one actor in a single-room setting were clear as the lighting and sound came through very consistently and allowed for a lot of visually pleasing shots. On the other hand, this segment did suffer from the main character talking to himself in weird ways occasionally. Something gimmicky like a vlog camera wouldn’t have worked for this character, so maybe giving him a beloved stuffed animal he absentmindedly talked to or something like that could’ve helped.

The mask belonging to the masked figure also created problems as the character was incredibly difficult to understand.

This masked character also seemed to have some kind of “Joker”-ish inspiration as he laughed through every line, seeming delighted at causing pain. That’s fine as a bad guy persona but got tiresome after a while. If that attitude were to change and the demon-thing became serious during impactful scenes, it might have been more frightening.

However, I did think this story had a strong ending. The audience somewhat expects the main character to prevail, getting rid of this problem in his life. But we didn’t see that. There could be hope for him in the future, but for now, he has succumbed to whatever this evil entity is going to do to him.

Playing on people’s struggles through the pandemic is the easiest way to get audiences to relate to your content right now, so that was a strong choice, as was tackling challenges with dissociation and trauma.

The final part of the anthology featured some of the strongest visuals and told a story which, in many ways, reminded me of “Promising Young Woman,” yet another film I really enjoyed.

The main character enters her school’s darkroom to develop some photos for a project. For some reason, she’s taking photos with flash in the darkroom and is shocked as she finds photos featuring some horrifying images. She grabs them and runs before the photographer can return, then shows them to her roommate, who agrees to help find out what happened. They identify girls in the photos by looking through the yearbook and talk to some of them to find out who could’ve taken them. Each girl seems to have been drugged, and the main character takes a while to get any leads, but the photographer ends up threatening her, invading her room and giving her a deadline to return the photos. She meets with him but takes revealing photos of him instead to use as blackmail, which she then takes to each of the victims. At the end, we see the main character burning some of the pictures she stole; pictures featuring her own face.

Throughout the storyline, the main character has many chances to take the evidence to the police and refuses to do so. If this had been a bit larger of a story element, it would’ve cleared up some confusion because I ended up feeling like it wasn’t an intentional part of the story. The reveal at the end cleared that up and was incredibly satisfying as an explanation for many of the main character’s choices, but some clarity earlier on would’ve set it up better.

Another thing that could’ve been cleared up slightly earlier was the contents of the photos she found. Obviously, they weren’t shown on screen, but for some part of the plot, it seems like they could’ve been photos of a murder or another crime. If that had been explained just a few minutes earlier, I would’ve focused less on figuring it out.

One incredibly effective scene was when the villain makes his threat to the main character. He approaches her in an otherwise empty classroom, but she doesn’t seem to take him that seriously… until he reveals he has a Polaroid photo previously shown in her dorm room. I got chills!

I mentioned it was strange that the main character was taking flash photography in a darkroom, but that’s easily overlooked in exchange for a cool setting and plot hook. One other plot issue was harder to ignore: after being confronted by the villain, the main character talks to more people to identify him, even though we had established she could find people in the yearbook. After being face-to-face with him, why couldn’t she do that again?

Luke Taylor is a senior journalism major. He can be reached at 581-2812 or [email protected]