The Daily Eastern News • May 14, 2022 • https://www.dailyeasternnews.com/2022/05/14/community-members-coles-progressives-rally-at-courthouse-steps/ 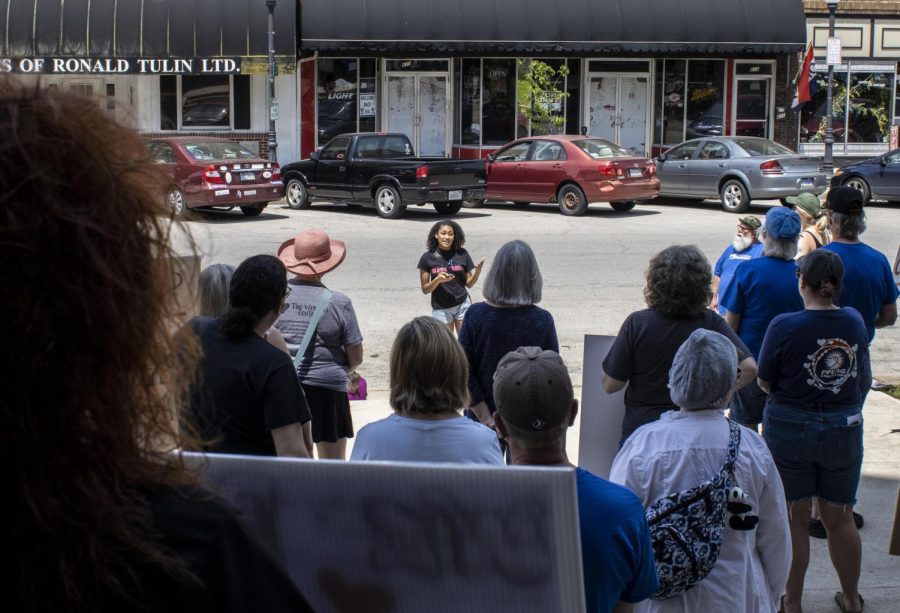 The rally’s purpose is to show protest against the Supreme Court draft opinion that possibly indicates overturning the abortion case Roe v. Wade.

During the rally, several speakers from surrounding communities delivered personal testimonies and chants to encourage rally-goers.

Among the 50-60 ralliers, Jessica Mertz said the thought of reproductive rights being terminated for half the population is terrifying to her.

Mertz gave several ideas in her emotion-invoking speech to those who wanted to reduce abortions:

Pump money into comprehensive sex education in schools
Give accurate information about contraceptive control making it free and readily available
Approach abortion from a place of active prevention instead of pretending abstinence-only education is the only solution.

“I mean, this is talking about our bodily autonomy to decide for ourselves and when we are ready to be parents,” Mertz said.

She notes from her speech saying “no little girl, woman, or person with a uterus ever says ‘Oh I want to have an abortion when I grow up, but things happen, people have sex.”

“What I’m saying is, I want the choice preserved to say ‘no, this isn’t for me,’” Mertz said. “This isn’t the time for me to be able to do that.”

Facing her own troubles in her childhood feeling neglected and put to the side, she says women shouldn’t be forced to have a baby if they aren’t yet ready or want one.

“I felt my whole life like nobody wanted me. Why would you want to do that to a child,” Cisney said. “So that’s why I’m here because I didn’t have a good childhood and I want children to have good childhoods.

She decided to attend the rally after her husband told her Roe v. Wade could be overturned; she was astonished after she heard the news.

“I was like really?” Cisney said. “This is what we’re looking at as a country?”

With the protest on Lincoln last Friday, the group decided to host another rally after bouncing ideas off each other at their recent meeting.

During the meeting, Silver Damsen, a member of Coles Progressives, said Gary Fritz, a biology professor at Eastern, suggested doing the protest on Saturday, May 14, in line with the national day of protests in support of Roe v. Wade across America.

Damsen said the two major political sides are the most separated countries in the world right now, saying she doesn’t know how they can come together.

“I don’t know how we can get the right-wing to say yes, you deserve those rights because you want them,” Damsen said. “We have to try and do it nonjudgmentally.”

Members of the PFLAG in Charleston, Amina Feder and Sam McCullough, gave a speech on how abortion affects the LGBT community beyond cisgender women during the rally.
During their speech, they highlighted intersectionality and not just abortion, but also gaining access to all treatments that serve every identity.

“This is a healthcare issue and a human rights issue,” Feder said. “It’s not just necessarily a moral debate.”

Feder and the group hope to potentially put together some legislative action in addition to having more conversations they are already having.