COLUMN: What I learned from interviewing the Ku Klux Klan 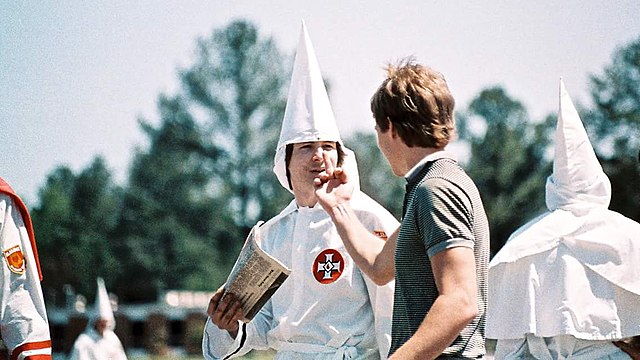 A young man flipping off a member of the Ku Klux Klan in 1986 in Auburn, Alabama.

The Old Glory Knights of the Ku Klux Klan are claiming responsibility for the bags of flyers with pro-Ku Klux Klan messaging and rocks that were left on Eastern’s campus last week.

Last week, after reporting on the flyers, I wanted to know more about the people who chose to target Eastern with messaging and began researching the flyers and their content (something that I would not recommend to anyone who is expecting coherent reasons for why the hate is being spewed).

I found postings on the neo-Nazi forum Stormfront, a website directly connected to the Old Glory Knights and a phone number on the website for those who were interested in joining the group. (Pro tip: Do not keep calling the Klan if they do not answer – they will block your phone number).

For more context, I will break down those findings:

This website was an absolute wasteland of racists, homophobes and just overall trash people. Most of the posts were incoherent ramblings (a theme you will find throughout this column) that spewed hate-filled diatribes.

While I was not expecting people who made an active decision to create an account with a neo-Nazi website to have a large number of brain cells to rub together, it was much worse than I expected.

As someone who has recently been part of major redesigns of both our online and printed publication, I was not only appalled by the ignorance displayed on the website, but also the hideous design. If you want to recruit people for an organization as heinous as the Ku Klux Klan, it may be in your best interest to have a website that is not as ugly as your propaganda.

As already mentioned, my attempts to talk on the phone were unsuccessful.

However, being as persistent as I am, there was no chance in hell I was going to stop there, so I emailed them. And, much to my surprise, they answered.

This, not surprisingly, was untrue as later confirmed by Lydia Bates, a senior research analyst with the Southern Poverty Law Center, which closely monitors hate groups like the Klan.

“Despite what they’re telling you, they do not have membership across a lot of different states,” Bates said. “They do not have hundreds of members; they’d be lucky to have double-digit members for that specific Klan group.”

Part of making themselves look bigger than they are is the flyering that Eastern is all too familiar with (see here, here and here). Bates described the act of flyering as “low energy, low risk” for the groups that do it.

“It’s a way for them to spread their hateful rhetoric and to make people feel intimidated and scared in places where they normally would feel safe,” Bates said. “And it’s an easy way for them to seem like they’re bigger and more relevant and they have more membership than they actually do.”

Flyering is a common practice, with the SPLC tracking 5,680 instances of white supremacist flyering in 2021.

Walls said the Old Glory Knights distribute flyers in places they know they will be seen to recruit like-minded individuals of the same race, religion and beliefs. Now, in my opinion, you should not expect to find too many Klan-minded people at Eastern, but I do not believe Klansfolk apply logic in their everyday thinking.

This was clear to me as I read through Walls’ responses to my questions.

The biggest example of this was Walls claiming that the Ku Klux Klan is not a racist organization, but rather an organization meant to celebrate a Christian lifestyle, white culture and racial purity. And while I don’t think I should not have to explain this, the Klan was, is and will always be a racist hate group.

Luckily, I also have a professional to back me up on that.

“Their claim of being not racist is wholly false, like unequivocally false,” Bates said.

Because I did not answer his question while emailing with him, I believe this could be a good place to address it.

Black Lives Matter and the NAACP exist because of people like those in in Klan and adjacent hate groups and movements. For years, people like Walls have spewed their deplorable beliefs, almost always in the shadows and cowardly.

They are scared of a world where they are not on top, facing the fact that their beliefs are outdated and unwelcomed, knowing that they are part of a group of people who a majority of the population despises and so much more.

And their actions are representative of that: they are scared, childlike menaces who want to cause harm.

Most important, however, the Ku Klux Klan and its beliefs are not welcome at Eastern Illinois University, and they will not be tolerated.