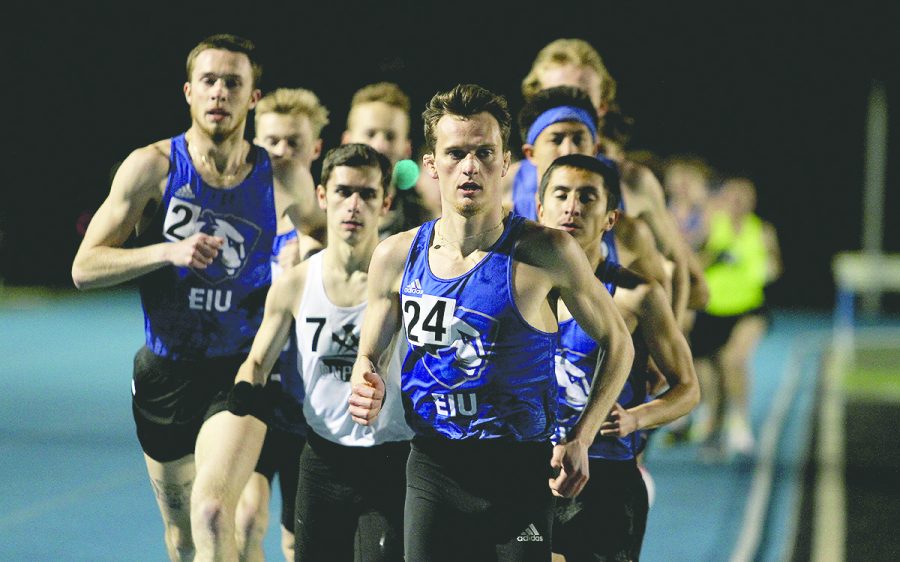 Eastern redshirt senior Dustin Hatfield (24) competes in the men’s 5,000-meter run at the EIU Big Blue Classic on April 1 and O’Brien Field. Hatfield did not finish the event, but set a school record in the 5,000 meters the previous week at the Raleigh Relays with a time of 13:53.21.

The name Dustin Hatfield can be found all over the Eastern track and field and cross country record books.

Hatfield had several school records in his crosshairs during the 2021 cross country season and both the 2022 indoor and outdoor track seasons, and his successes further cemented his place as one of the very best runners in Eastern history.

Hatfield entered the 2021 cross country season after being named First Team All-OVC in 2020 and quickly emerged as the conference’s top runner. He was named OVC Runner of the Week three times during the season, including after a record-setting performance in the Louisville Classic on Oct. 2, 2021.

Hatfield finished in seventh place and set a new school record in the 8K with a time of 23:28.2, breaking the record set by Joe Sheeran in 1977 by nearly 18 seconds.

He was then named OVC Runner of the Year on the eve of the OVC Championship in Nashville. Hatfield lived up to that title, placing first with a time 24:31.5, 17.6 seconds ahead of teammate Jaime Marcos, who finished second.

He was the fourth Eastern runner to be named Runner of the Year.

Hatfield advanced to the NCAA Midwest Regional, placing 18th and being named All-Region for the second time in his career. But he wasn’t finished.

Hatfield became the third runner in Eastern’s Division I era to make it to the NCAA Cross Country National Championships.

He finished 77th, which was the second-highest finish for an Eastern runner trailing only Joe Sheeran and his 18th-place finish in 1977.

Eastern graduate student Lindsey Carlson proved her excellence in multiple sports throughout the 2021-22 year, performing well in both cross country and track after a successful four-year soccer career as an undergraduate.

Carlson posted one of the best cross country seasons in Eastern history, picking up three first-place finishes in six meets and being named OVC Runner of the Year. She was named Runner of the Week four times.

She took an individual first-place finish in the 5K at the OVC Championship, posting a season-best time of  17:25.1, which also ranks as the second-best 5K time in program history.

She also set an Eastern record while competing in the Bradley Pink Classic, posting a 6K time of 21:03.5. She also ran the 6K at the NCAA Midwest Regionals, finishing 20th overall and receiving All-Region honors.

Her success continued in the outdoor track season. She set a school record in the 10K at the Mt. Sac Relays, posting a time of 34:13.10 to finish eighth, breaking the school record by over a minute. It was her first time running the 10K in college.

Eastern junior Lariah Washington had the best season of her career in 2021-22, and considering how her career has started, that’s no small feat.

Washington set a new career high with 15.6 points per game, ranking third in the OVC. She started all 30 games for the Panthers and scored in double figures 27 times and scored 20 or more points seven times, including a season-high 26 points against Austin Peay on Jan. 15.

With a 20-point performance against Tennessee State on Jan. 29, Washington became the 27th player in Eastern history to eclipse the 1,000-point mark for her career.

Washington was given first team All-OVC honors for the second time in her career, joining her freshman season in which she was also named OVC Freshman of the Year. She was named second team All-OVC following her sophomore campaign.

In her career, Washington has started 86 of a possible 87 games.