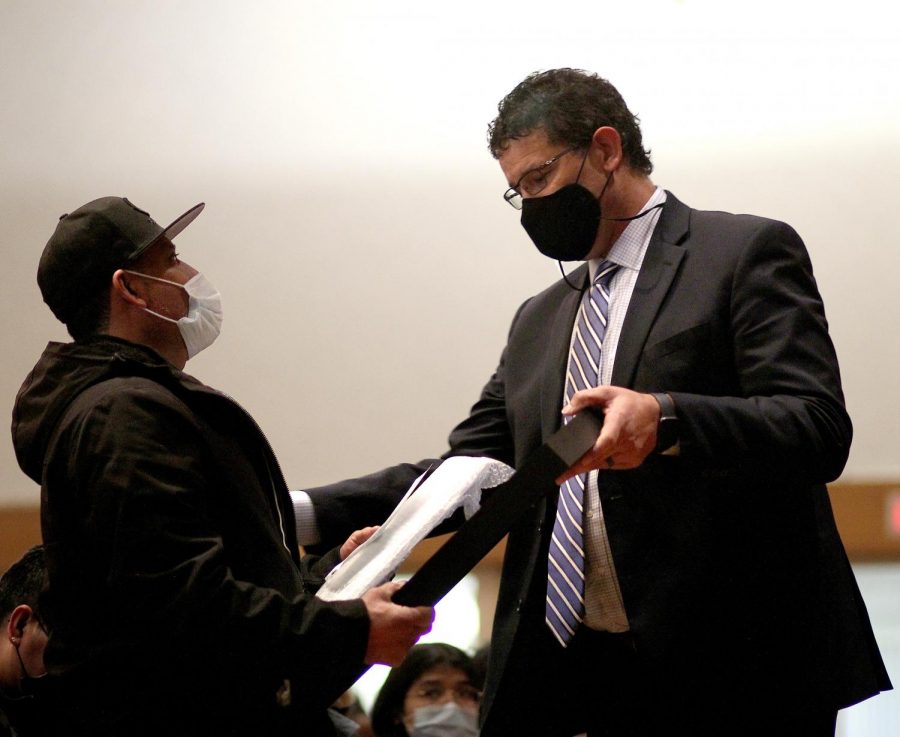 In a year where Eastern athletes have gone through the effects of a pandemic, the loss of a member of the athletic community and all of the regular stressors of college, Eastern Athletic Director Tom Michael said he wants them to know Eastern Athletics stands behind them.
With mental health traditionally being a taboo topic among athletes, Michael said he has seen a welcomed change on the attitude around it in recent years.
He said in his time as an athlete in college, opening up about mental illness was a sign of weakness. Now, Michael said he does not want any Eastern athletes to feel like they cannot talk about their concerns. Part of overcoming those feelings is creating a different atmosphere in the athletics community.
He said while he knows all of the coaches working with him would be willing to work with students on their mental health issues, some students may be hesitant to discuss their problems with their coaches.
“If the student doesn’t believe that or feel that, that’s what we have to change. So that’s what we continue to try to work on, work through,” Michael said. “Certainly, we can’t just sit back and say, ‘well, if they’re not going to tell us then we’re not going to know,’ we have to be more aggressive and we have to really challenge ourselves to get better through this through this entire process.”
Michael said he wants athletes to connect with the support systems available to them within their teams and the department as a whole. Specifically, he hopes they build relationships they can lean on in times of need.
“I think it comes down to the relationships so that they feel comfortable being able to come to someone, whomever that might be, whether it’s administration coaches, support staff, whomever it is, when they are feeling overwhelmed but then it’s also making sure that our staff is attuned to the individuals who are part of their programs so they might be able to see when someone is struggling.”
However, Michael said that even with those ideas in place, there is always room to improve the connections between students and their coaches and support staff.
“It’s being in tune to some of that and the frightening part about it is that we still may not be able to, but I think we help our chances if we continue to work on improving those relationships. I think our coaches have good relationships with our kids. But without question, we can always make that better,” Michael said.
These conversations were elevated within the athletic department following the death of Jason Aguilar.
Aguilar, a sophomore accounting major and track athlete, died by suicide on Oct. 30, 2021. His death shook his teammates and members of Eastern’s athletic community, as well as the campus at large.
Michael said Aguilar’s death is one of the biggest challenges he has face in his professional career.
“It is as challenging of a situation to try to lead and guide a department through as I’ve experienced in 25 years,” Michael said.
He said it was difficult because “he was one of them. He was one of us.”
“That’s the rawness. That’s the reality. The real piece of all of this,” Michael said. “In athletics, we like to be in charge and in these situations, we don’t get to be in control. And that’s what’s hard.”
In the future, Michael hopes that the athletic department can continue to adapt to best support athletes.
He said while he wants coaches to be aware of the struggles their teams face, he also wants them to know that they are not at fault in the worst-case scenario.
“I just hope that we can get our kids the help that they need and support systems around them to be able to, to recognize and see that there’s people that’ll help,” Michael said.