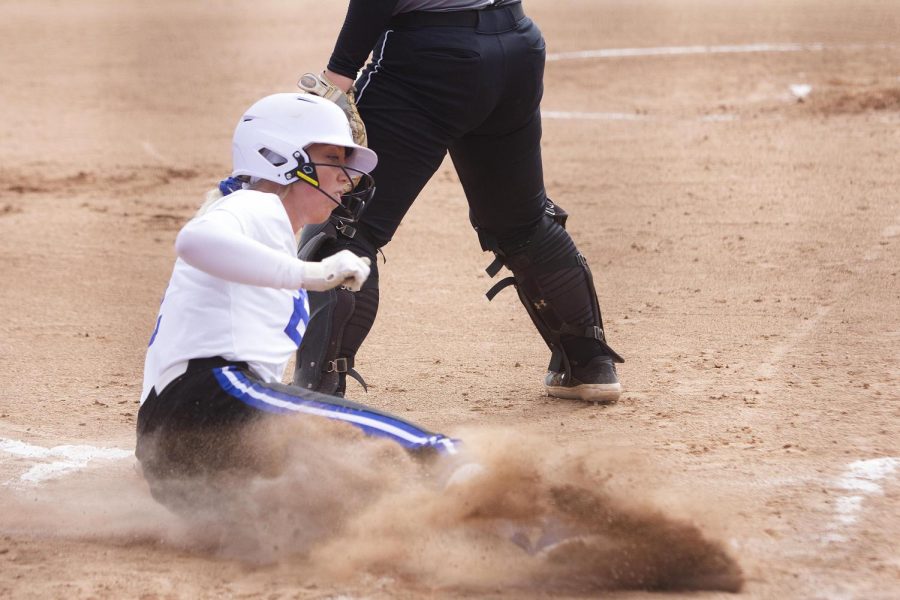 Eastern shortstop Megan Burton slides into home in the second game of a doubleheader against Purdue Fort Wayne on April 6 at Williams Field. Burton walked and scored a run in the game, which Eastern won 3-2.

After getting swept by Southeast Missouri over the weekend, the Eastern softball team dropped to 6-8 in conference play and sixth place in the OVC.

The Panthers are still just three games out of the top half of the conference with about a month left in the regular season, and a series against Tennessee-Martin up next on the conference schedule.

Eastern lost the opener of the series 13-1 in five innings and dropped both games of a doubleheader Sunday, losing 7-6 and 8-0. The usually dependable Eastern offense was held to just one hit in the opener and three in the finale. Southeast Missouri does rank third in the OVC with a team ERA of 3.17.

The Redhawks are now 9-3 in OVC play, placing them second in the conference.

They trail only Murray State in the standings. The Racers are 11-3 in conference play, with two of their losses coming to Eastern.

Belmont sits in third place with a 10-4 conference record, and have a pivotal series coming up with fourth place Tennessee Tech. The Golden Eagles are 9-5 and have won three games in a row.

Tennessee-Martin heads into the upcoming series with Eastern one spot ahead of the Panthers, sitting in fifth with a 7-4 conference record.

Austin Peay sits in seventh at 6-8 in conference play, one game ahead of 5-9 Southern Illinois-Edwardsville.

Tennessee State has fallen to ninth place after losing 10 of its last 11 games, including being shutout six times in that span.

Morehead State is at the bottom of the standings with a 1-12 conference record.

Cravens also leads the conference with 41 RBI and ranks fourth with a .767 slugging percentage.

Eastern’s Megan Burton, who was the team’s leading home run hitter last season, is tied for sixth in the OVC with seven home runs.

Murray State’s Hannah James leads the conference with a 1.45 ERA while ranking second with 115.2 innings pitched. Her teammate Jenna Veber ranks second in ERA at 1.59.