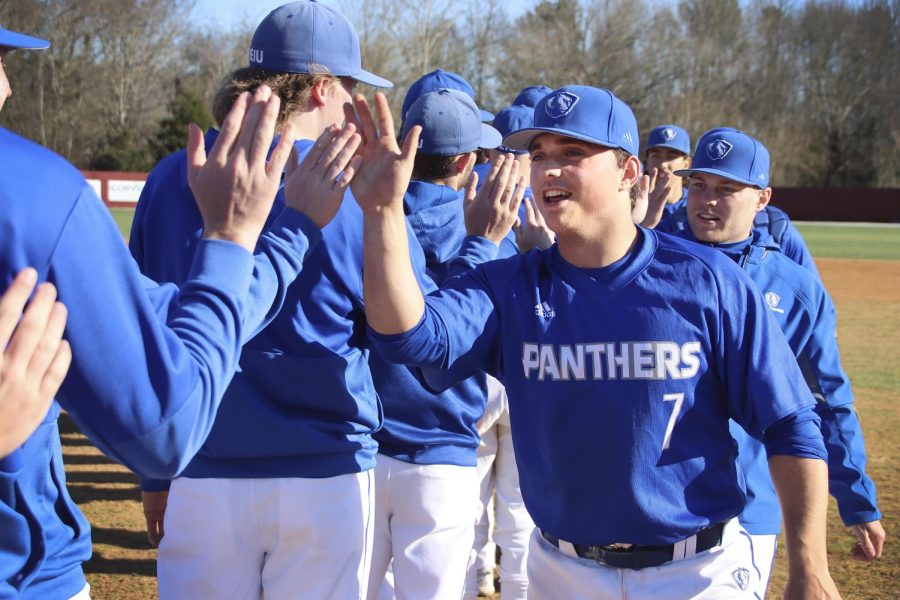 Eastern utility player Ryan Ignoffo (7) high fives his teammates after the Panthers’ 3-2 win over McNeese State on March 18. The Panthers won the series to improve to 13-4 on the season.

The Eastern baseball team still sits at the top of the OVC standings after a long weekend series against SIUE as the conference enters Week 4 of Play.

The Panthers are now 5-1 and 21-8 overall as they took the series win against the Cougars. The first game was a 5-4 win in favor of the Panthers. Redshirt senior Lucas DiLuca was vital to game one of the doubleheader as he hit a walk-off single in the bottom of the ninth to put the Panthers on top.

They had an eight run first inning which helped keep the momentum going for the rest of the game. Senior infielder Dalton Doyle was 3-5 on the day with four RBIs and two runs scored. Redshirt sophomore Nicholas Rucker was 2-3 with three RBIs and three walks. Kyle Lang earned his first win of the season.

Southeast Missouri and Belmont are currently tied with an OVC record of 7-2. The Redhawks swept their OVC rival, Murray State, in three games. Senior infielder Tyler Wilber was a huge asset for the Redhawks this weekend as he went 4-for-5 with two runs, a double and two RBIs in the first game.

In the second game, Wilber went 4-for-4, hitting the game-winning home run to go along with three RBIs and two runs. Wilber once again came up clutch in the last game as he hit a solo home run to tie the game in the bottom of the ninth, going 3-for-5 with two runs and an RBI.

Belmont took the series win against Tennessee Tech. Freshman catcher Tommy Crider hit a walk-off pinch-hit single in the bottom of the ninth to give the Bruins the 9-7 win for the first game of the series. The second game belonged to sophomore pitcher Andy Bean who threw 108 pitches over eight innings with five hits and one earned run while striking out seven. The momentum did not keep up for the last game, however, as the Bruins lost 8-1.

Murray State and UT-Martin are tied at the bottom of the conference standings with a record of 1-8. Austin Peay swept the Skyhawks in a three-game series, putting the Governors at fourth in OVC with a record of 6-3.

Junior pitcher Tyler Delong struck out nine batters and only allowed one run in six innings during the first game of the series. Senior catcher Jack Alexander hit two home runs during the second game. Freshman outfielder Nathan Barksdale hit a three-run home run in the top of the ninth inning, his first collegiate homer, to cap off the series for the Governors.

Morehead State won their series against non-conference opponent Presbyterian. The first game of the series resulted in the Eagles losing 11-7. In the second game, the Eagles out hit their opponents 16-6. The Eagles capped off their weekend behind Jackson Feltner’s performance who batted .583 going 5-for-7.