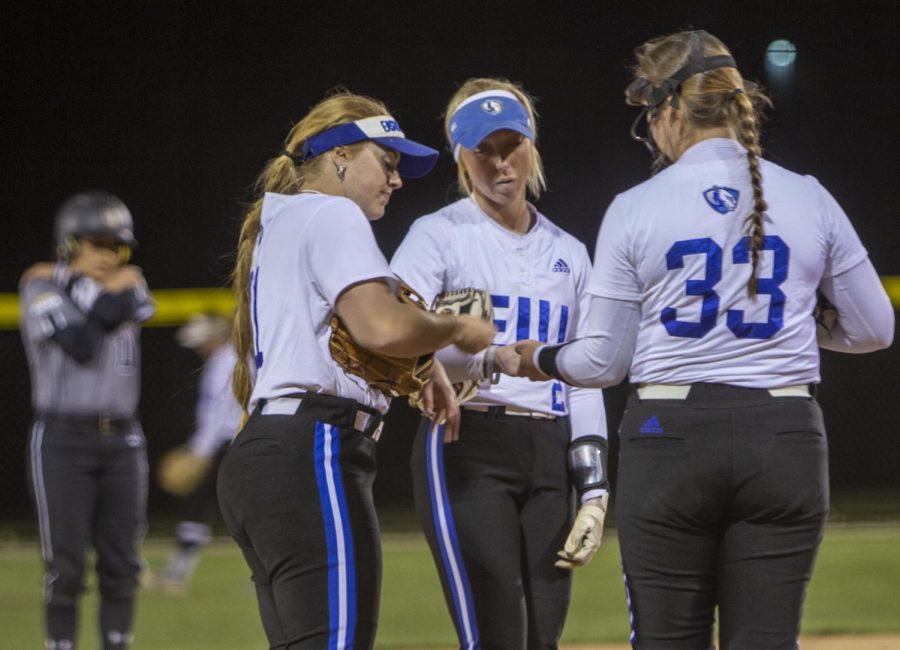 From left, Maddie Swart (33), a sophomore political science major, Megan Burton (2), a senior educational leadership major, and Rachel Kaufman (33) a sophomore marketing major, talk in between plays during the second game against the Purdue Fort Wayne Mastodons. The Panthers won both games, the first 13-8 and the second 3-2 on Wednesday night.

The Eastern softball team played its final two nonconference games of the season Wednesday, hosting a doubleheader against Purdue Fort Wayne at Williams Field. The Panthers came from behind to win both games, beating the Mastodons 13-8 in the first game and getting a walk-off 3-2 win in the second.

Head coach Tara Archibald said she was pleased to see the team find a way to win two games in different ways.

The home run for Cravens was her conference-leading 13th of the season.

In addition to Cravens and Milkowski, Megan Burton hit a home run, a solo shot, in the fourth. Jaylen Prichard was 2-for-4 with three RBI and two runs scored out of the leadoff spot while Kendall Fields was 3-for-4 with two RBI. Every Eastern player to receive an at-bat in the game reached base at least one time. Alexa Rehmeier picked up the win for the Panthers, allowing one run on one hit in 1.2 innings of relief.

Archibald said that, even trailing by five runs, the team never felt like they were not in control of the game.

“I felt like our team, our dugout believed we were going to win even when we were down by five runs, and I think that’s a big step for our program,” she said.

The second game of the doubleheader had a different, with runs being scarce for much of the game. Milkowski opened the scoring with an RBI single in the first inning, driving in Burton.

The Mastodons tied it up with a sac fly from Sonia Solis in the third inning, and the score remained 1-1 into the sixth, when a solo home run from Taryn Jenkins put Purdue Fort Wayne up 2-1.

In the bottom of the seventh inning, Marama Makea worked a one-out walk to bring the winning run to the plate and assure that Cravens, who was due up fourth in the inning, would have a chance to hit.

Prichard would single next, sending Makea to third and bringing Cravens to the plate. Prichard stole second base, putting her in scoring position for the Panthers’ hottest hitter.

Cravens then doubled down the left-field line, driving in Makea and Prichard and giving the Panthers the 3-2 win.

Looking ahead, nothing but conference games remain for the Panthers. As the team heads into the final month of the season, Archibald said that the team is focusing on what will likely be a tough series against Southeast Missouri on the road this weekend.

“We’ve got a big weekend coming up with SEMO. SEMO is the defending champs and were preseason picked as No. 1 (in the OVC),” she said. “It’ll be a big weekend for us. We’re going to go in and fight hard and see where we end up.”

The Panther and Redhawks play a doubleheader April 9 and a single game the following day.