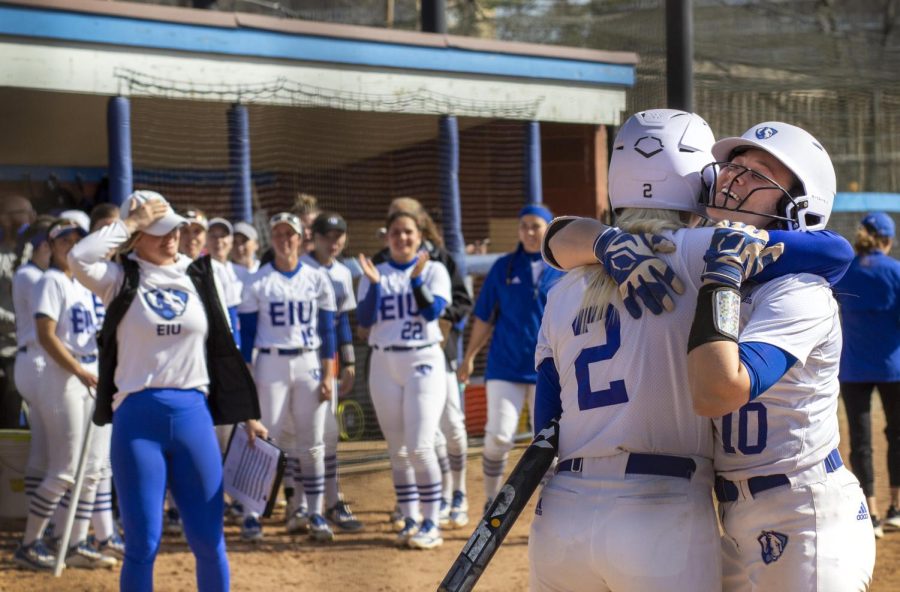 Eastern second baseman Hannah Cravens (10) celebrates with shortstop Megan Burton (2) after hitting a home run in the second game of a doubleheader against Murray State Sunday afternoon at Williams Field. Cravens has a total of 12 home runs on the season. The Panthers won 5-0 against the Racers.

After a pair of midweek road losses, the Eastern softball team bounced back at home, taking two games of a three game series against Murray State.

The Racers were 8-0 in conference play coming in, but the Panthers gave them their first conference loss with an 8-0 win Saturday. The teams split a Sunday doubleheader, with Murray State winning game one 9-5 and Eastern taking the finale 5-0 to grab the series win.

The Panthers are now 6-5 in conference play this season and Murray State is 9-2.

Eastern head coach Tara Archibald, now in her third season with the Panthers, said she was happy with the team’s performance against a tough conference opponent.

“Absolutely incredible. I’m so, so proud of our girls and their fight and the effort they put forth this weekend,” she said.

The Panthers jumped ahead early in Saturday’s game when second baseman Hannah Cravens drove a two-run home run down the left-field line to give the Panthers an early 2-0 lead. That proved to be the only offense the Panthers needed. Freshman pitched Alexa Rehmeier held the Racers scoreless on just two hits through five innings, striking out five and walking three.

Eastern’s offense added three more runs in both the fourth and fifth innings, with Cravens hitting an infield single in the bottom of the fifth to drive in Jaylen Prichard as the game-ending run in a steady rain.

Rehmeier got the start once again in the first game of Sunday’s doubleheader. She got knocked around early by the Racers, allowing six earned runs on seven hits in just 1.1 innings. Tieghan Morio and Kaitlyn Reifsteck settled things down a bit in relief, combing to throw 5.2 innings and allowing three earned runs.

Eastern mounted a rally in the third inning, cutting the score from 8-0 to 8-4. After Murray State extended its lead to 9-5, the Panthers nearly mounted another rally in the bottom of the seventh, scoring on a wild pitch before twice having the tying run come to the plate with the bases loaded before Prichard and Cravens were both retired to end the game.

It didn’t take Cravens long to respond. In the first inning of game two, Cravens drove in the game’s first run on a single before a sac fly from Megan Burton put the Panthers up 2-0 after the opening frame.

Cravens extended the lead to 3-0 with a solo home run in the third inning, her OVC-leading 12th of the season. The Panthers would also score runs on a Kendall Fields home run in the fourth and a Burton single in the fifth.

Rachel Kaufman picked up her third win of the season, holding the Racers to just five hits in a shutout effort. She got some help from solid defensive play, mainly a couple of highlight catches from Field in right field and a pickoff of a runner at first base by catcher Lindy Milkowski to end the game.

Archibald said that defensive play has been a point of emphasis for the team, and despite leading the OVC with 55 errors heading into this weekend’s series, the Panthers only committed two errors in the three-game set.

“It’s something we’ve been working hard at here the last week and a half or so, really focusing on trying to improve in that area,” she said. “I thought we responded really well to that and came out and really held it down.”

Archibald also had good things to say about Cravens’ continued success. After going 5-for-9 with two home runs and seven RBI in the series, Cravens is hitting .381 with 12 home runs and 38 RBI, all of which lead the team.

Cravens said she is happy to able to help the team through her strong hitting.

“I’m glad that I’m able to do what I can for the team,” she said. “They’re all having my back, so I just have their backs as well throughout the whole game.”

She also said she was glad to see the team pick up a couple of big wins against an opponent that was unbeaten in conference play.

“That’s really big for our program,” Cravens said. “I can’t remember the last time we did that, so it just shows our mindsets are in the right place right now and I can’t wait to see where we go from here.”

Eastern will be back at home for a doubleheader against nonconference opponent Purdue Fort Wayne on Wednesday before resuming conference play on the road against Southeast Missouri on April 9 and 10.