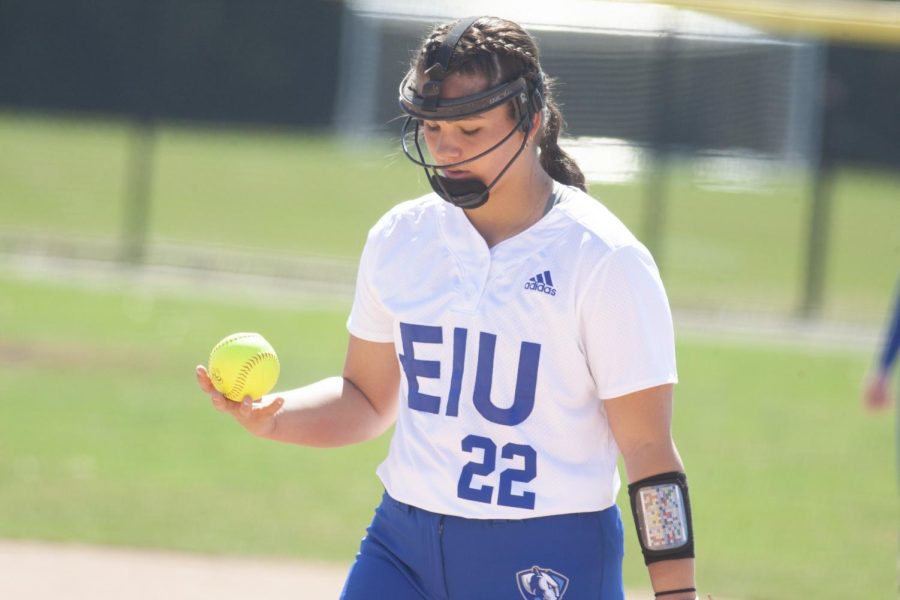 Eastern pitched Alexa Rehmeier prepares to face a batter in game one of a doubleheader against Morehead State on March 20 at Williams Field. Rehmeier threw a complete game shutout, striking out 10 batters as Eastern won 4-0.

The Eastern softball team dropped a series for the first time in conference play, losing two of three games to Tennessee State after opening conference play with a sweep of Morehead State.

The Panthers are still 4-2 in conference play, putting them in third place in the OVC standings.

A trio of 3-3 teams sit behind Eastern in the standings, with Tennessee Tech, Tennessee-Martin and Southeast Missouri sitting at .500.

Tennessee Tech got swept by Tennessee-Martin to open the season and then swept Southeast Missouri the following weekend.

Tennessee-Martin then got swept by Murray State.

Tennessee State and Austin Peay both sit at 2-4 with 1-5 Morehead State in ninth place and 0-6 Southern Illinois-Edwardsville inhabiting last place.

Tennessee-Martin leads the conference with 174 runs with Eastern right behind with 173 runs. Tennessee Tech has 170 runs, 15 more the fourth-ranked Murray State.

Murray State leads the way with its pitching, posting a team ERA of just 1.17, ranking fourth in all of Division I.

Tennessee-Martin’s team ERA of 2.98 ranks second in the conference, and the teams ranked third through eighth are all within a run of that mark.

Eastern ranks fourth with a 3.29 ERA while Morehead State’e ERA of 7.10 ranks last by a margin of more than two runs and sits near the bottom of the nation.