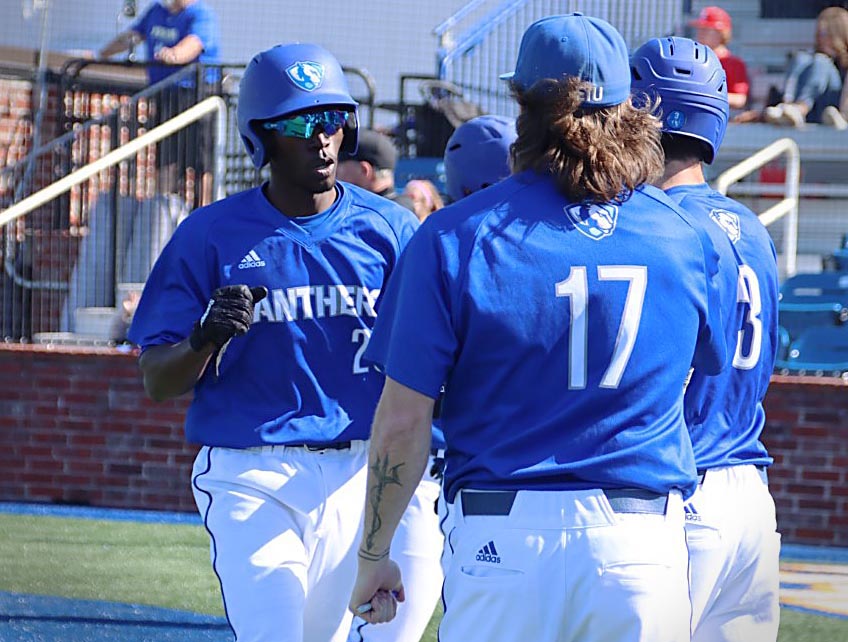 Eastern shortstop Ja'Lil Akbar high fives teammates after scoring a run in Eastern's road game against McNeese State on March 19. Akbar was 1-for-4 with the run in the game, which Eastern lost 6-3.

The baseball teams of the OVC wrapped up their first week of conference play and after a long weekend of competing, the Eastern Illinois Panthers sit at the top after sweeping UT-Martin.

Senior left-handed pitcher Trevor Nicholson was a key contributor to the Panthers’ first game against the Skyhawks last Friday. He pitched a complete game while allowing five hits, three earned runs, and had 14 strikeouts.

His performance earned him a spot as one of the National Players of the Week by Collegiate Baseball and OVC Pitcher of the Week. He ranks fifth nationally in strikeouts per innings (15.43).

The Skyhawks are in seventh place in the conference for team pitching with a 6.07 ERA. Jacob Smith leads the way with a 1.86 ERA through 9.2 inning pitched.

Southeast Missouri is right behind the Panthers in the standings with a 17-5 overall record and a 3-0 record in conference play. The Redhawks swept SIUE in a three-game series, making it their fourth sweep of the season.

The Redhawks’ lineup is led by Brett Graber who is batting .356 with a .575 slugging percentage. Graber reached base for the 22nd consecutive game against the Cougars. Andrew Keck went 3-for-4 with a home run to help complete the sweep Sunday afternoon.

Belmont is third in the conference with a 2-1 record and an overall record of 16-9. The Bruins dropped one of their three games against Austin Peay to open conference play. The Bruins are third in team batting average with a .280 and second in team pitching with a 4.29 ERA.

Freshman outfielder Guy Lipscomb leads the team with a .400 batting average and a .541 slugging percentage. Jalen Borders is third in the conference in individual pitching with a 2.61 ERA through 31innings.

Austin Peay is sixth in conference standings with a 1-2 record with an overall record of 8-17. Jack Alexander leads the team with a .420 batting average while Harley Gollert leads the team on the mound with a 4.75 ERA.

Tennessee Tech has yet to begin conference play as they sit at seventh place in the conference with a 0-0 record and an overall record of 15-7. The Golden Eagles dropped their three-game series to Bradley University.