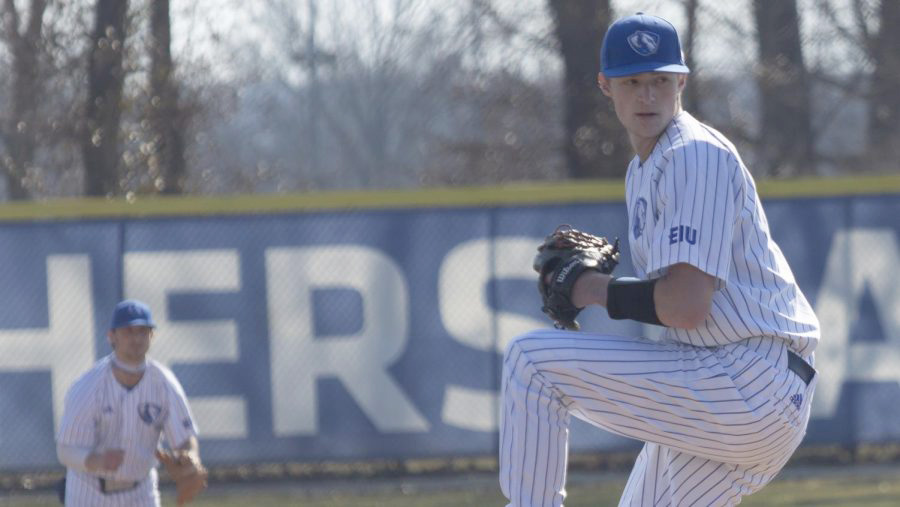 Eastern pitcher Kyle Lang winds up for a pitch against Bellarmine on March 9, 2021, at Coaches Field. Lang pitched a season-high 7 innings, allowing 6 hits and 1 run in an 8-1 Eastern win.

The brooms were out in Louisiana over the weekend as the Eastern baseball team picked up a three-game sweep over Grambling State.

The Panthers have won five of their last six games and are now 6-3 on the season.

Eastern’s offense was productive in all three games, scoring a combined 31 runs in the three games. The pitching in turn held the Tigers to 15 runs, 11 of which came in one game.

The opener on Friday was the lowest-scoring game of the series, with the Panthers winning 7-4.

Senior pitcher Trevor Nicholson led the way in the win, allowing just one unearned run in six innings while striking out 12 batters, the highest total for an OVC pitcher in a game so far this season. He was named OVC Pitcher of the Week on Monday for his effort.

Out of the bullpen, Jackson Nichols and Ryan Ignoffo allowed three runs, two of which were unearned, in a combined 2.1 innings. Zane Robbins came in to face the final two batters, striking them both out to earn his first save of the season.

The Panther offense scored once in the first inning and four times in the seventh before picking up two insurance runs in the top of the ninth inning.

Five of the Panthers’ runs were unearned, scoring four times on errors and once on a wild pitch.

Lucas DiLuca and Logan Eickhoff, the first two hitters in the Eastern lineup, both went 2-for-5 in the game.

Grambling got on the board with back-to-back home runs in the fourth, setting the tone for a nine-run inning for the Tigers.

Eastern was down 10-9 in the seventh when an three-run home run from Nathan Aide put the Panthers ahead for good.

Hayden Birdsong got the win after pitching 4.2 innings of relief in which he gave up just 2 runs. Robbins threw a shutout ninth inning to pick his second-straight save.

Birdsong was the last Panther to give up a run to Grambling, as Eastern won the series finale 11-0 behind pitcher Cameron Doherty and his seven shutout innings.

Doherty gave up just four hits and struck out eight batters in the game.

DiLuca and Aide had big games once again, going a combined 4-for-7 with five RBI and four runs. Ignoffo hit an inside-the-park home run in the Panthers six-run fourth inning.

Eastern will head back south this weekend for a three-game series against Alabama A&M on March 11 through March 13.