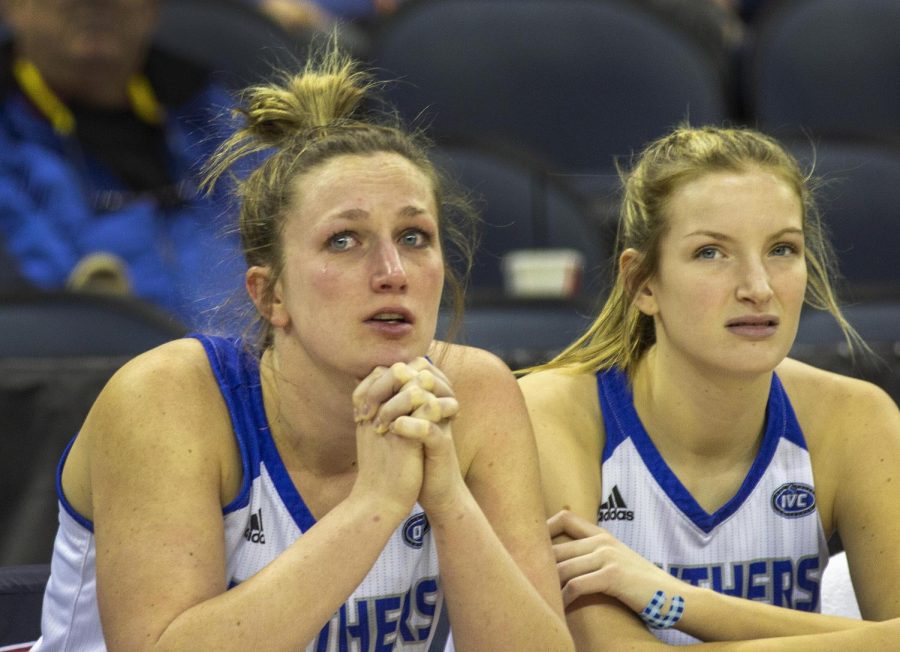 The EIU women's basketball team members, from left, senior Abby Wahl and sophomore Parker Stafford sit on the bench in the last 30 seconds of the Panthers 72-61 loss to Tennessee State in the OVC Tournament in Ford Center in Evansville, Indiana, on Wednesday.

EVANSVILLE- For the second-straight season, the Eastern women’s basketball team’s season has come to an end in the opening round of the OVC Tournament in Evansville.

The fifth-seeded Panthers were upset at the Ford Center by Tennessee State, the eight seed, losing 72-61 to the Tigers on Wednesday.

In a matchup between two teams ranked in the top-10 in the nation in steals, there were turnovers aplenty in the first half. Eastern turned it over 20 times but gave nearly as good as they got, forcing the Tigers to turn it over 15 times in the opening 20 minutes.

After the Panthers came out strong in the third quarter and took a 40-38 lead with a minute remaining in the quarter, the Tigers pulled away with a 29-21 advantage in the fourth.

“At halftime I felt pretty good because we turned it over a lot in the first half, which hasn’t always been typical for us, then Jordyn (Hughes) hit a big shot and we were down six,” he said. “I knew we could play better, and then we did in the third quarter… we gave ourselves a chance. And give (Tennessee State) credit. They made enough plays in the fourth quarter and we didn’t.”

Hughes shot to cut the halftime deficit to six points was one of several highlights in the game for the team’s seniors, with Hughes, Kira Arthofer and Abby Wahl playing the final game of their Eastern careers Wednesday.

Wahl nearly recorded a double in front of a large section of family and friends in attendance. Wahl, from nearby Santa Claus, Indiana, had 10 points and a team-high nine rebounds

Arthofer had 10 points, five assists and a game-high eight steals while also turning it over 11 times.

She played the first 39 minutes of the game before fouling out with just under a minute remaining. She said that playing a team like Tennessee State, which ranked third in the nation with 359 steals in the regular season, presents challenges through their aggressive playing style.

“They’re a very aggressive team, and give them credit for that, they practice that” Arthofer said. “It’s tough going against a team that it running and jumping you the whole time, but for the most part I feel like we stayed together. We tried to respond off of mistakes and, nothing more that we can do now, but give them credit for moving around and getting hands on balls.”

Outside the seniors, junior guard Lariah Washington led the team with 17 points to go with seven rebounds. Freshman guard Julia Bengston added eight points in 13 minutes off the bench,

On the other end of the spectrum, Tennessee State was enjoying a postseason win that came on the heels of an eight-game losing streak to close out the regular season.

The Tigers entered this season with a roster consisting almost entirely of new players, with sophomore forward Kennedy Davis being the only returning player.

Tigers’ head coach Ty Davis, in his second season with the program, said he was proud of his team for sticking together through injuries and coming up with a big win.

“It’s been a long three or four weeks, absolutely,” he said. “We’ve had some unfortunate injuries down the stretch, but we just talked about being resilient… we just got back to who we were as a basketball team.”

One major injury was to forward Dominique Claytor, a graduate transfer from East Carolina who was the team’s third-leading scorer this season. She scored 16 points in Tennessee State’s first matchup with Eastern on Jan. 29. Claytor has not played since Feb. 19, also against Eastern.

Despite not being in Evansville, Davis said Claytor was a major part of the Tigers’ win.

“Dominique did our pregame speech and she also was in the locker room via FaceTime for the post game celebration,” he said. “She’s the heart and soul of our team. She wanted to be here and we’re just glad that we got it done for her even though she wasn’t here.”

Leading the Tigers on the court Wednesday was guard Tatyana Davis, also a graduate transfer, and guard Gia Adams, who was named OVC Freshman of the Year on Tuesday.

Davis went down with an apparent left-knee injury in the third quarter, and after icing it and working out on the sideline, came back to score seven points in the fourth quarter, including a personal 6-0 run to put the Tigers up 66-52 with just 1:24 remaining in the game.

She said that going forward in the tournament, she expects to have to keep working to remain healthy and available.

“Going forward I feel like I have to take care of my body a little more and do extra stretching and extra therapy,” Davis said. “I’m definitely taking an ice bath tonight even through I hate taking ice baths.”

Davis finished with 19 points, tied for the team lead with Adams, who said that the win felt even better considering what came before it.

“Playing today, it meant a lot for us,” Adams said. “The eight-game losing streak, that kind of hit hard for us because we did start out strong, and to fall like that and losing some of our players that were major factors, it hit hard. So for us to win today, and get to talk to (Claytor) while she was at home, it meant a lot. We’re back.”

Looking ahead to next season, both Eastern and Tennessee State seem to be poised to play a major role in the new-look OVC. Three of the conference’s top four teams this season, Belmont, Murray State and Austin Peay, will leave the OVC over the summer.

Bollant said that he hopes Eastern can take another step toward the top of the conference next season.