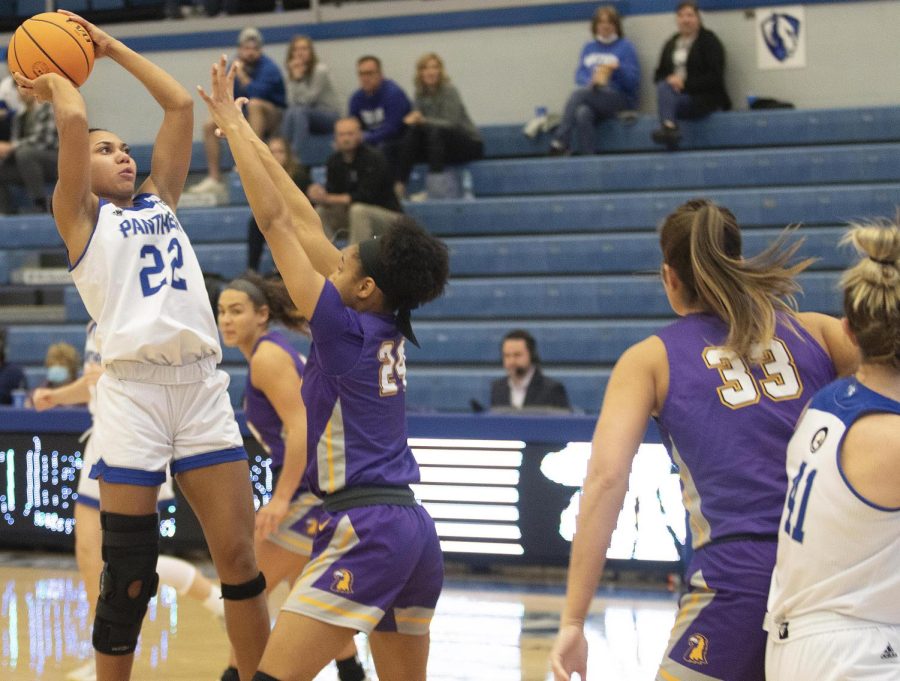 Eastern guard Lariah Washington attempts a shot in the Panther's game against Tennessee Tech on Feb. 10 in Lantz Arena. Washington had 14 points in the game, which Eastern lost 65-56.

The OVC announced its postseason men’s and women’s basketball awards Tuesday on the eve of the OVC Tournament.

Eastern junior guard Lariah Washington was the only Panther honored by the conference, being named first team All-OVC for the second time in her career. She also received the honor her freshman season and was named second team All-OVC last season.

Washington finished the regular season ranked third in the OVC in scoring, averaging a career-high 15.5 points per game. She started all 29 games for the Panthers and scored in double figures 26 times, scoring a season-high 26 points against Austin Peay on Jan. 15.

She averaged 20.3 points per game in the Panthers’ three-game win streak to end the season, which helped them clinch the fifth seed in the OVC Tournament.

Elsewhere in the OVC, Murray State forward Katelyn Young was named OVC Player of the Year after leading the conference in points per game and rebounds per game. Her scoring average of 20.2 points per game ranked 19th in the nation.

Belmont guard Tuti Jones was named OVC Defensive Player of the Year. She led the OVC with 2.85 steals per game, ranking 12th in the nation. Jones got the award over several other potential options, including Eastern guard Kira Arthofer who ranked second in the conference and 16th in the nation with 2.79 steals per game. Arthofer led the conference with 81 steals, ranking eighth nationally.

Belmont’s Bart Brooks was named the OVC Coach of the Year on the women’s side after leading the Bruins to a 16-2 conference record and their fifth OVC regular season title in the last six seasons.

Tennessee State’s Gia Adams was named OVC Freshman of the Year, an award Washington won two seasons ago, after finishing 12th in the conference with 12.6 points per game.

The full women’s All-OVC teams are as follows: