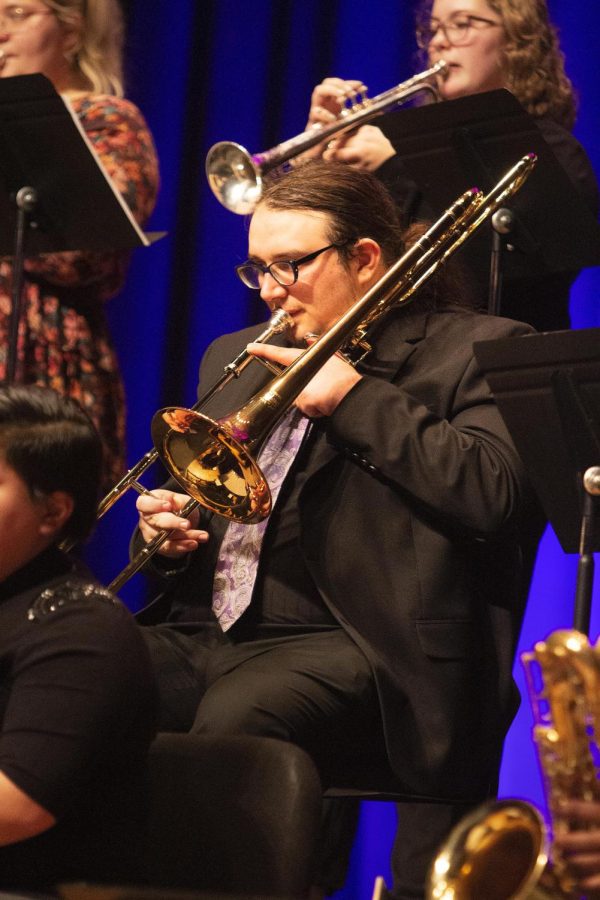 A member of the Jazz Lab Band focuses on his music sheet while playing the trombone.

Strains of the music of Ray Charles and Duke Ellington could be heard leaking out of the Dvorak Concert Hall in Doudna Fine Arts Center on Tuesday night.

The occasion was the performance of Eastern’s Jazz Lab Band, a big band jazz concert that, contrary to last week’s combos performance, featured up to 19 student-musicians as they made their way through the music of not only Charles and Ellington, but also Jerome Richardson, Josef Zawinul, Carolyn Leigh and Cy Coleman.

The centerpiece of the evening was Ellington’s “The Queen’s Suite,” a five-movement piece written for Queen Elizabeth and released after Ellington’s death.

Jazz studies professor and Jazz Lab Band director Paul Johnston, who selects the songs to be performed, said he had experience with the piece from his days in college.

“I actually played it in my college band, which was how I learned of it,” Johnston said. “And I bought the CD, and I’ve been listening to it for years. And I just have a special group of people this semester, and I thought that we could do it. We have some great clarinetists in the band, and so I think everyone was up for the challenge.”

Luke Noble, a senior trumpet performance major, said he was attending the show to listen to the music rather than perform it, and mentioned that he knew some of the people on stage.

“It’s just great to see people in their element and see these groups perform like that,” Noble said. “I feel like you got to see everybody shine and do their own thing. It was great.”

Kyle Huddleston, a graduate student studying jazz performance, performs in multiple jazz groups at Eastern and said the energy between the band on Tuesday night transferred over from their rehearsals.

“I thought it went really well,” Huddleston said. “I felt like the energy on stage was great. I think in general playing with this group has always just been such a fun time, and I think we just got to relive that on stage.”

The suite’s fifth movement, “The Single Petal of a Rose,” was a piano piece performed by Minsoo Kim and cited by both Huddleston and Johnston as among the highlights of the evening.

“The Queen’s Suite” ended with “Apes and Peacocks,” and Huddleston said he loved the way the titles of the movements matched the music.

“It has this high energy thing going on with it, and (Ellington’s) writing creates such scenes and imagery that when you read the names of different movements, it perfectly makes sense,” Huddleston said.

Huddleston, who performed in last week’s combos concert, noted the differences he appreciates between big band and combos.

“Big band’s fun because the arrangements end up being a lot more tighter, and there’s a lot more volume with it having so many more people and having more people involved,” Huddleston said. “But I like playing with the combos more just because it gives me a little more liberation… I get much more space to solo and kind of do my thing. In combo, it’ll just be like, ‘Here’s two wide open choruses, do whatever you want with it,’ which is awesome to do.”

The next jazz event, with guest jazz bassist Chuck Israels, is on March 22 at 7:30 p.m.