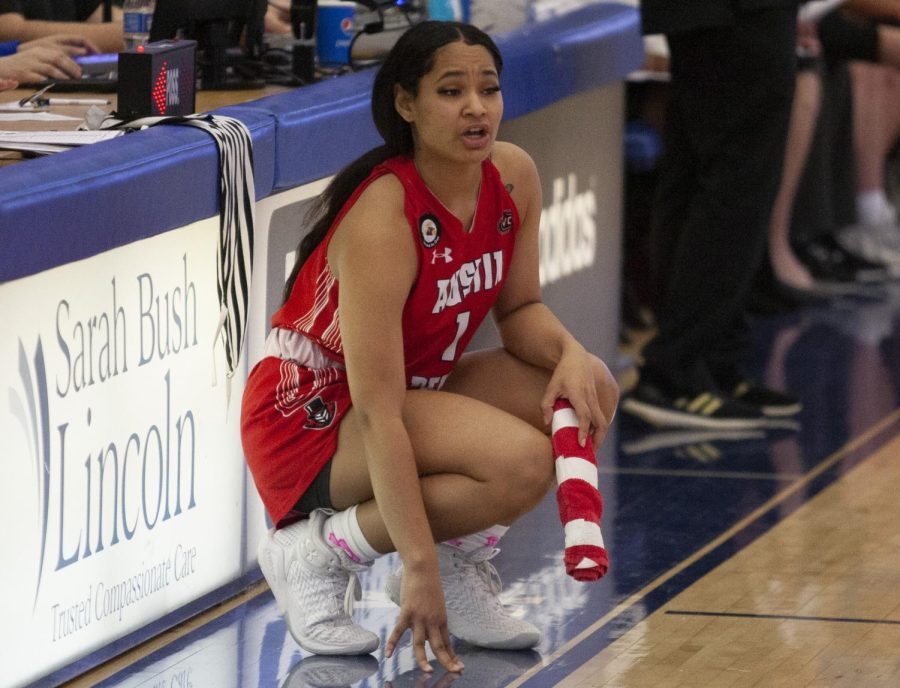 Austin Peay guard Karle Pace waits to check in to the women's basketball game between Austin Peay and Eastern at Lantz Arena Saturday. Pace returned to Lantz Arena for the first time since last year when she was a senior for the Panthers. She ranks 11th in Eastern history with 1,387 points.

Saturday was the regular season finale for the Eastern women’s basketball team.

It was also a homecoming for former Eastern star Karle Pace, who came back to Lantz Arena as a member of Austin Peay’s women’s basketball team, returning to the building where she played for four seasons as a Panther.

Pace, who is from Clarksville, Tennessee, chose to attend graduate school at her hometown university and play for the Governors with the extra year of eligibility made available by the COVID-19 pandemic.

While at Eastern, Pace started a majority of the team’s games as a freshman and played in all 29 contests. She then started 80 of the 81 game she played in over the next three seasons. She left Eastern with 1,387 points, the 11th-most in program history. She also was a major part of the team’s 16-win turnaround in a two season span. The Panthers were 3-26 her freshman year and 19-12 her junior year.

Saturday was not the first time Pace played against Eastern. Austin Peay beat the Panthers 75-72 in Clarksville back on Jan. 15 with Pace scoring 15 points in the win.

Although Austin Peay lost on Saturday and Pace scored just three points, she said she was happy to come back to a place she spent four years of her life and see with old teammates a friends again.

“It felt good being back here,” Pace said. “Obviously this is my school. I love the people, love the coaches. I love my teammates, my old teammates. It was good to see their faces again. It’s always good to see them.”

Despite the loss, the Governors maintained the fourth seed in the OVC Tournament that begins on Wednesday. Pace helped lead the team to an 11-7 conference record while finishing second on the team and fifth in the OVC with 14.7 points per game, just behind team-leader Yamia Johnson who ranked fourth with 14.9 points per game.

She also shot the ball well from three-point range, finishing third in the OVC with 53 three pointers while finishing second in the conference in three-point percentage.

It was the second-highest scoring season of Pace’s career, trailing only her junior campaign at Eastern when she averaged 15 points per game.

She said she was able to fit in well with a new team due in part to some familiarity she already had with her new teammates.

“I actually played with some of the girls in the summer just because it’s my home town,” she said. “So every time we would get a break I would go there and I would play with them. They were very welcoming to me being on the team and they didn’t look at me as an enemy or anything like that. They were welcoming, so I got the confidence from them.”

Pace was one of the first recruits Eastern head coach Matt Bollant brought to Eastern when he got the job in 2017.

Eastern senior Abby Wahl played with Pace for three seasons. Wahl said that it is a somewhat strange experience playing against a former teammate.

“It’s different, we’re not used to it,” Wahl said. “She’s amazing player so we knew we had to step up and play hard against her. She led our team a lot when she was here. It was fun, but we played well and she played well and we came out ready to guard her.”

Looking ahead to Evansville, Pace and the Governors have a bye for the first round as the four seed. When they take to court on Thursday in the quarterfinals, Pace said she thinks the team has some things to shore up to make sure they are successful.

“I think we have some work to do,” she said. “We definitely have to come together. Lately we’ve had droughts or we just haven’t got off to a good start, so we definitely have to come together these next couple days before the tournament starts. We do get a bye, so that’s good. We get a little bit of rest before we play our next game, but we’ll most likely be seeing EIU again, so we’ll take this game and we’ll learn from it.”

If Eastern beats Tennessee-State in the first round on Wednesday, the Panthers and Governors will play again on Thursday at 1 p.m.