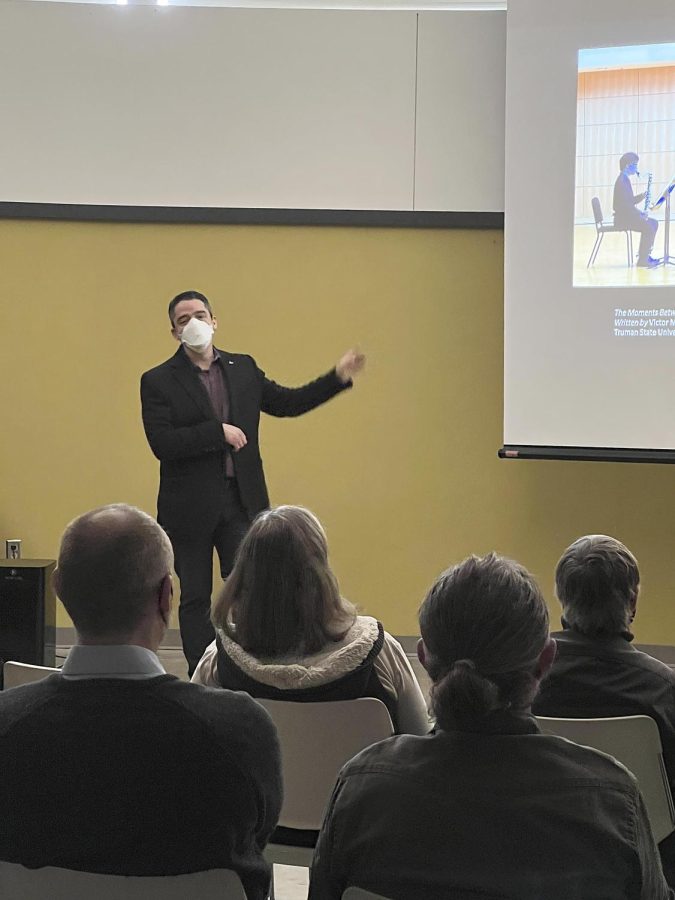 Composer Victor Marquez-Barrios, presents a piece of music he wrote during the Art Speaks event at Tarble Friday. Marquez-Barrios is from Venezuela and has written music performed by ensembles across the world.

Collaboration and inspiration were a couple of the themes of the Art Speaks! event held at the Tarble Arts Center on Eastern’s campus Friday afternoon.

In what was the first in-person artist lecture at Tarble since before COVID-19, artists-in-residence Rafael E. Vera and Victor Márquez-Barrios spoke to attendees about their lives, careers and collaborations, including their upcoming premier of “The Visitor” Saturday night in the Black Box Theatre of the Doudna Fine Arts Center.

Vera, who works in the visual arts, and Márquez-Barrios, a musician and composer, originally met as fourth graders in their hometown of Maracaibo, Venezuela, the nation’s second-largest city.

In recent years they have begun collaborating, mixing Vera’s visuals with Márquez-Barrios’ music, with the works often echoing their shared cultural and life experiences.

Both have also gone into the world of academia, with Vera teaching painting, drawing and printmaking at Loyola-Chicago, and Márquez-Barrios teaching music theory and composition at Truman State.

“I’m very passionate about what I do,” Márquez-Barrios said. “I love music. I love art, and I really think we need it. And I think that’s my main message. I try to get the idea across to my students that, perhaps in a way, try to remind them of why they signed up for a career in music or why they signed up for a career in art. Because once it becomes your main thing, it’s easy to think about it as work, and it is work, but it is important to every so often go back to how much you love this thing, so much that you decided at one point, ‘this might be what I want to do for the rest of my life.’”

He also said that he wanted to make his love and passion for music something that his students can feed off of.

Vera said he likes to approach teaching art as a way to teach his students life skills in general.

“I use art kind of as a conduit to teach life lessons,” Vera said. “My goal is that they leave my classroom, and they use what they learned from art to use in their lives.”

He told a story about a former student that he ran into on the street after 10 years who now had a job unrelated to art.

“I said, ‘Well I guess you wasted your time learning art,’ and she’s like, ‘Oh, no. On the contrary… I have the job I have because art taught me about problem solving.’ That’s the best thing someone could have told me, because it’s the most rewarding thing to hear for me,” Vera said.

Vera’s sculptures featured objects interacting in a way that he likened to having conversations, and in response, Márquez-Barrios wrote a piece in which a clarinet and bass clarinet played parts that also felt conversational.

Vera returned the favor a few years later, creating a pencil drawing in response to a piece Márquez-Barrios wrote for a marimba that an old colleague had made out of reclaimed wood.

This collaboration is something that appealed to Paul Nau, a junior transfer student studying music technology.

“I enjoyed it a ton,” Nau said. “I’m super passionate about music, I’m a musician, but also I’ve been personally interested in ways to combine my music making with other art styles. It was awesome to hear some people talk about how they had done that and it was really inspiring to me.”

Jennifer Seas, Director and Chief Curator of Tarble, said that she was happy that the lecture was able to take place in person today, and she hopes that those who attended the lecture or will attend “The Visitor” will be able to take something valuable away from them.

“I always hope that people walk away from something that I’ve organized with new ideas or finding someone else who had a shared feeling,” she said. “That’s really what I think art is about, and I think there’s something really nice to understanding how one can build a career with their friends. I think that’s a really special thing, and so I really love the history of Victor and Rafael’s collaboration because they’re not only professionals who are working together, but they’re also good friends.”

Their latest collaboration, “The Visitor,” begins at 7:30 p.m. Saturday. Based on a previous work from Vera and Márquez-Barrios called “Transient Visitant,” and is in part about their shared experiences as immigrants. It is free to attend.