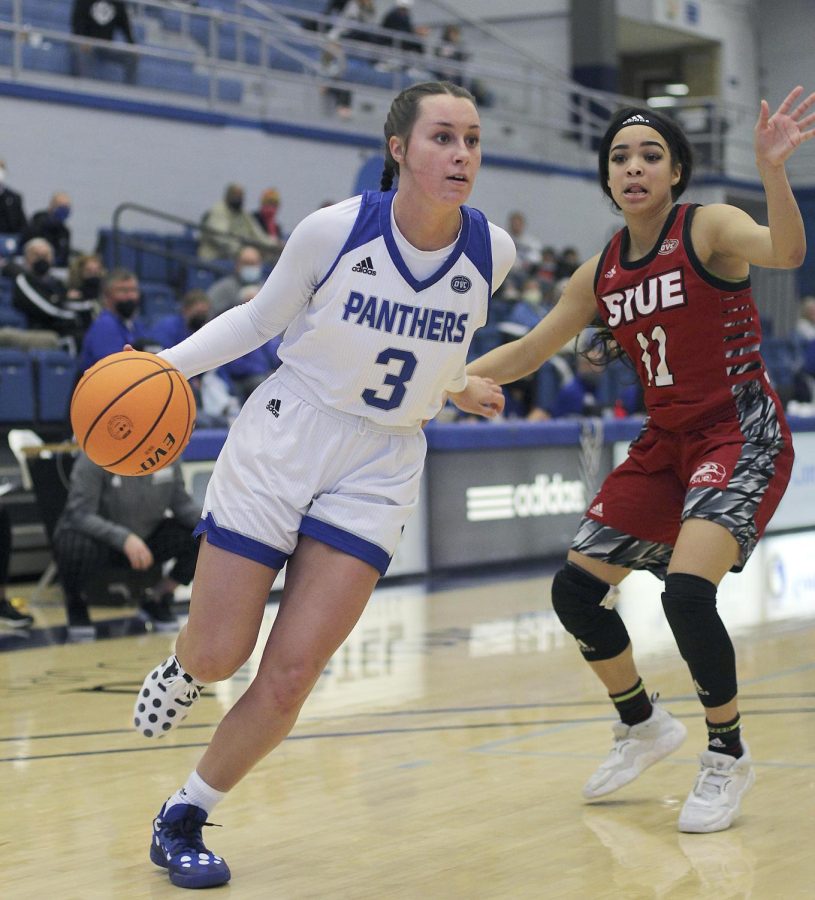 Miah Monahan, a freshman guard, drives the ball towards the basket in the women’s basketball game Monday against the Southern Illinois-Edwardsville Cougars at Lantz Arena. Monahan led the team with 15 points and had 3 rebounds. The Panthers won 89-65.

It took just two quarters for the Eastern women’s basketball team to take control of its game against SIUE on Monday.

Eastern outscored the Cougars 32-14 in the second quarter and led by 26 at half time, leading by as many as 36 and eventually winning 89-65. It was the third-straight win for the Panthers and their fifth win in the last six games. They are now 6-4 in conference play after a 1-3 start.

Eastern head coach Matt Bollant said that the team has been executing better lately, exemplified by their all-around strong performance on Monday.

Eastern did start slowly from the field, starting 3-of-13 and shooting 30 percent in the first quarter. They then shot 55.6 percent the rest of the game, including 62.5 percent in the second and third quarters. They also made 10 three pointers on 17 attempts.

But the second quarter was where the Panthers pulled away. They shot 11-of-18 including 6-of-9 from three-point range, and held the Cougars to just eight field goal attempts.

In addition to the scoring in the quarter, Bollant said that he thought the defense did a good job limiting what the Cougars could do offensively.

“I thought the buzz, we got them to turn it over. They had 15 turnovers at halftime,” he said. “We did a good job of pressuring the ball and making them uncomfortable.”

The Panthers had four players in double figures, led by freshman guard Miah Monahan with a career-high 15 points. She had set a career-high with 11 points in the Panthers’ previous game against Tennessee State on Saturday, a number which she reached by halftime Monday.

“My teammates were getting me open shots, and I felt confident,” she said.

Monahan shot 4-of-5 from the field and 3-of-4 from three while going 4-of-4 from the free-throw line. She also had four assists and three rebounds.

Bollant said that he was happy to see Monahan’s confidence pay off once again.

Sophomore Haley Cameron led the team with seven rebounds in just under 12 minutes off the bench.

As a result of the early lead, Bollant was able to rest his starters for much of the second half. All of the Panthers’ 11 active players played at least 10 minutes in the game. They all scored at least two points and had multiple assists or rebounds.

The Cougars were led by junior forward Ajulu Thatha with 15 points. She shot 8-of-11 from the free-throw line and was the only SIUE player to score in double figures.

As the Panthers move forward in the season, Monahan said she likes the position the team is in.

“I feel so good. We were in a little slump but now we’re out of it,” she said. “Practices are fun, the team is fun. As a freshman I love my team and the coaching staff’s great. I feel good where we’re at.”