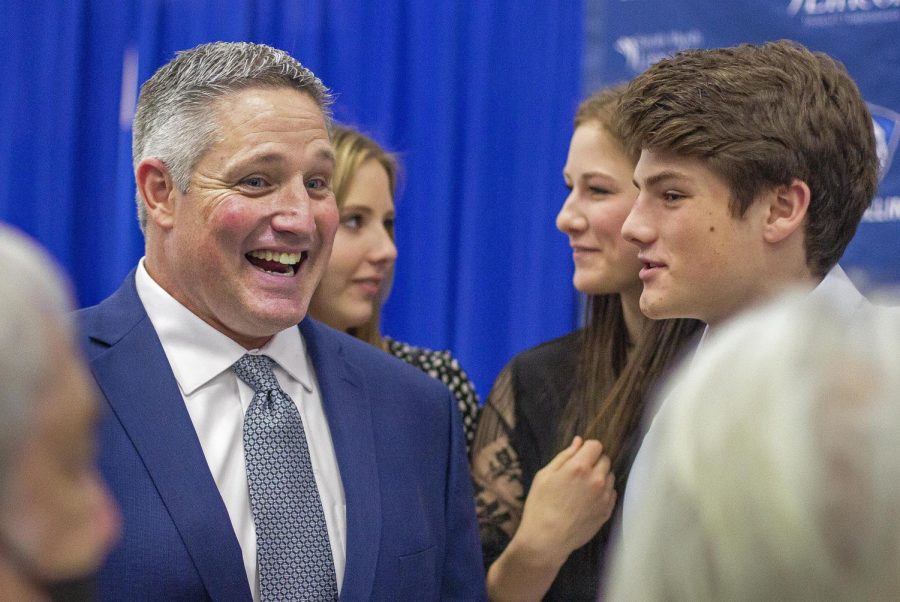 From left, Chris Wilkerson, Eastern's 26 Head Coach for football, talks to former teammates along side his son, Peyton Wilkerson, on Friday in the Hall of Champions in Lantz Arena at Chris’s press conference.

Pride for Eastern’s football past was mixed with optimism for its future Friday as Chris Wilkerson was introduced as the next head coach of the Eastern football program.

This dynamic was present throughout Wilkerson’s introductory press conference, as former and current players listened on.

Among them were several of Wilkerson’s old Eastern teammates, who came to watch their friend realize dream; taking over as the head coach at a school where he played and coached for a decade.

“Thirty-two years ago this Wednesday, I made a decision that changes my life forever. I signed my national letter of intent to attend Eastern Illinois University, and man did that change the trajectory of my life” Wilkerson said.

Wilkerson said that Spoo is the reason he became a coach at the college level, something that he has been now doing in various position at multiple programs since 1995.

“I came to Eastern because I wanted to teach and I wanted to coach, but I thought it would be at the high school level. And when I got done with my senior year, coach approached me about the possibility of helping with the staff in the spring,” he said. “I said, ‘coach, I haven’t really thought about coaching college ball. I’m finishing my student teaching over at Mattoon Junior High School, Sharna and I are getting married in May, I’ve already passed the Illinois state examination, I’ve got reciprocity in Indiana. I thought I’d get a job teaching and coaching at the high schools.’”

He said that Spoo thought he could have a “bright future” as a college coach, which is something that has rung true.

“Twenty-seven years later and I haven’t done anything other than coach college football,” Wilkerson said. “He was such an influence on my development just as a person. I owe everything I have to this day to Bob. He’s just a huge influence on my life.”

Another member of Spoo’s coaching tree was in attendance Friday. Sean Drendel played linebacker at Eastern from 1990 to 1993 and is now the head coach at Naperville North High School in Naperville, Illinois. He said that he thinks Wilkerson will be a good fit for the job.

“Chris has always been a hard-working, tough individual,” Drendel said. “When he played here, he was a little bit undersized for the position he played, but he was built on hard work… He’s got great passion for this place.”

Drendel also mentioned Spoo’s legacy at Eastern, saying that having someone connected with that era of Eastern football take charge of the program is something to be excited about.

Throughout Wilkerson’s speech Friday, he made a call for pride in Eastern football, for former players from all eras to return to a program that they are forever a part of.

He said he wants to build an era of sustained success at Eastern, much like the one that was overseen by Spoo.

“I know he’s going to be watching every single day,” Wilkerson said, “and my goal is that we make him proud.”