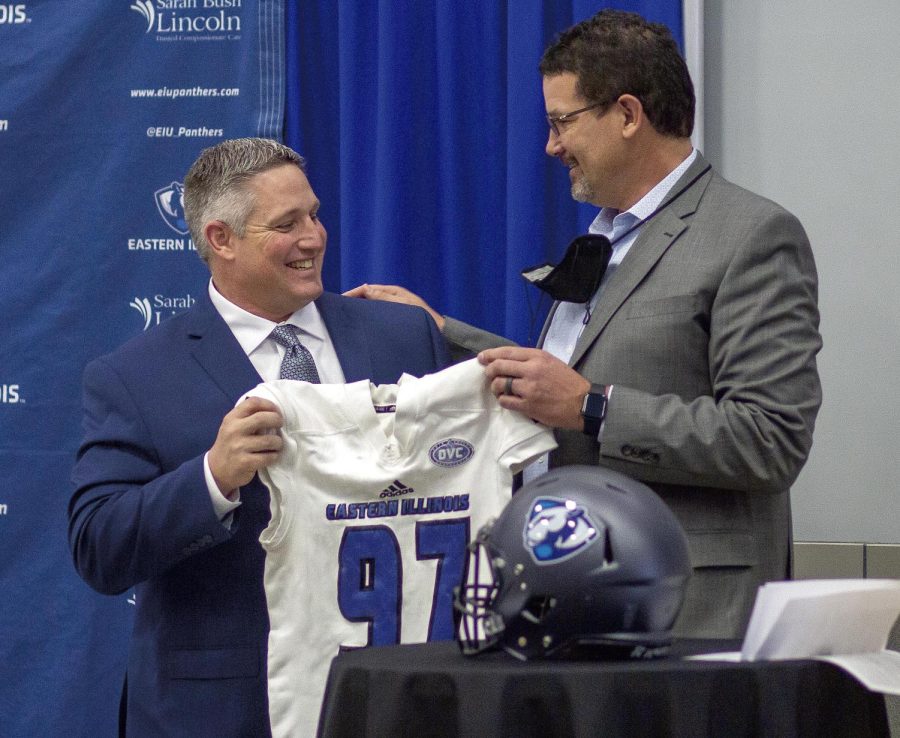 The Eastern Athletics formally introduced Chris Wilkerson as the 26th head coach of the football program Friday morning in the Hall of Champions in Lantz Arena.

Wilkerson is no stranger to O’Brien Field and the culture of Panther football. Wilkerson played defensive tackle for the Panthers from 1991-94 earning his degree from EIU in 1995. Wilkerson then began his coaching career on the staff of Eastern coach Bob Spoo from 1995-2001. During that time, Wilkerson had stints as defensive coordinator, linebackers coach, and defensive line coach but primarily led the special teams unit all seven years.

Eastern president David Glassman reflected on the meeting he had with Wilkerson prior to his hiring during the press conference, noting that being head coach here at Eastern has been a life dream of Wilkerson since 1995.

“He told me during that meeting that his life’s goal, his life’s goal, starting in 1995 was to be the head coach at EIU. That he’s wanted that position since 1995 and that desire, that dream, that vision has never changed since 1995, and now he gets to live it,” he said. “Celebration is today but I know that Chris is going to immediately go into the hard work of making those relationships and it’s all about relationships with recruiting and keeping the team moving together as a team, and that’s going to start tomorrow. He’s not going to wait.”

Eastern Athletic Director Tom Michael echoed Glassman in his statement by saying that Wilkerson exhibits many traits that make him the perfect fit for the football program.

“I am ecstatic about Chris leading this program,” he said. “When I really got to know Chris, we talked to Chris very early in the process, and as we had conversations and got to learn more about his personal traits, about how passionate the man is. He is passionate about teaching and coaching, he’s got unbelievable positive energy, an engaging personality that is magnetic and infectious.”

In the last three seasons, the Panthers have won three games. In the 2021 season, the Panthers averaged 14.5 points per game and ranked 116th out of 123 FCS teams. They ranked 111th in rushing offense, 92.2 yards per game. Wilkerson said that with work, and the combination of new coaches on both sides of the ball, the Panthers’ offense should flourish.

“Work is the easiest answer. Certainly, right now we are just starting to get to know the players and before my arrival we had hired an offensive coordinator named Joe Davis. I’ve had a chance to meet with Joe and I am super excited about his addition to our staff,” he said. “We have in the last 48 hours offered and been accepted a couple of new assistant coaches that will also be joining us. We still have one coach to add to the staff on the offensive side of the ball and a couple on the defensive side. It’s a blank slate, we are going to get together collaboratively as an offensive staff, as a defensive staff, as a special teams staff, and we are going to figure out what the players in our program now that are the best players can do and what they can do well and then it’s our job to mold what we do offensively and defensively to play to the strengths of our players.”

In one of his first moves as head coach, Wilkerson promoted Adam Gristick who has served as the defensive run game coordinator and linebackers coach since 2018, to defensive coordinator. Wilkerson said that Gristick’s football IQ is a great asset to his staff.

“Adam bleeds blue and not just because he bleeds blue, but he is a very skilled, effective teacher, communicator, motivator, and defensive mind. I had heard some very good things about Adam prior to arriving,” he said. “We certainly were able to spend a lot of time together here recently and I have been thrilled with his football IQ, his effort, his energy, his enthusiasm and his passion, especially for Eastern Illinois University and our football program.”

Prior to Wilkerson’s arrival, there had been some major roster changes. Eastern linebacker Jason Johnson, who led the OVC in tackles during the 2021 season with 112, announced he was entering the transfer portal earlier this month. Wilkerson said that as head coach, he will primarily focus on bringing two-year college transfers and junior college transfers to the program.

“It’s always going to be about talent acquisition. Recruiting has really evolved a lot in the last couple of years with the transfer portal stuff,” he said. “We still believe that our nucleus, our core, is going to be four-and-five-year high school student athletes here at Eastern. We will accent our program with two-year college transfers or junior college transfers and if there is a player, a collegiate athlete, that is in the portal that happens to be a good fit for us and address our immediate need we will certainly be open minded to bringing them here as well.”

Wilkerson said that the transition into being the new head coach has been happening very fast, but he was able to stress to his players that he understands that they are more than football players.

“This has all happened fast, I feel like I’m drinking through a firehose right now,” he said. “It was an opportunity just to make sure that I want them to understand that I care about them as people, not just as football players. I want to help them be the best that they can be because this place helped me do that. I want them to understand how passionate I am about Eastern and helping them develop.”

It is no secret that the OVC has been shrinking within the past year. Murray State and Austin Peay will be headed to different conferences starting this July. Wilkerson said that the recent history of the OVC did not affect his decision to become head coach.

“No, and I was very aware of the recent history with the Ohio Valley Conference,” he said. “Certainly, as I talked to Tom and Dr. Glassman, it’s something they are discussing at the presidential level, the athletic director level, and the competition level. There is an ongoing discussion, but I feel very, very good about the future and the sustained viability of a football conference.”

As Wilkerson begins a new era for the Panther football program, he has made it clear that his success will not happen without the support of former players, no matter who they played for.