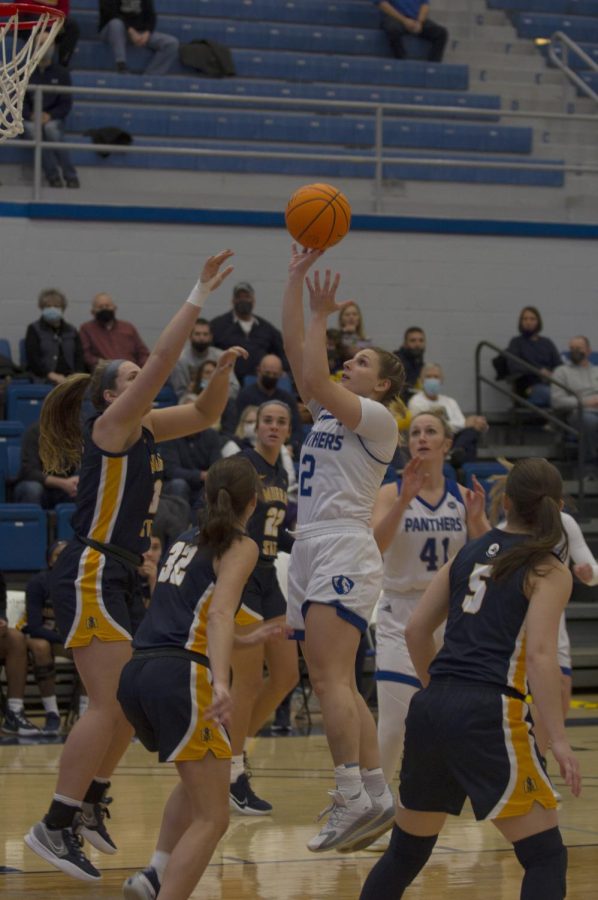 Eastern guard Jordyn Hughes attempts a layup in Eastern's game against Murray State on Jan. 17 in Lantz Arena. Hughes scored 14 points in the game, which the Panthers lost 80-71.

The start of conference play for the OVC women’s basketball teams has been marred by COVID-19 postponements, but through the rash of rescheduled games, the standings are starting to take shape.

Sitting atop the conference is Belmont, which will surely not come as a surprise to anyone who has been following the OVC in recent years.

Behind Belmont is a trio of four-win teams, including Tennessee State at 4-1 and Murray State and Austin Peay at 4-2.

Murray State and Austin Peay have each lost to Belmont for one of their two conference losses and rank first and second in the OVC in scoring respectively.

Tennessee Tech with its 3-2 record is the last OVC team with a record above .500. The Golden Eagles are coming off a 17-point win against Southeast Missouri.

Sitting in sixth place with a 2-2 record is Southern Illinois-Edwardsville, which lost its last game to Austin Peay, snapping a modest two-game winning streak.

Seventh-place Tennessee-Martin has played just three conference games so far, the fewest in the conference. The Skyhawks have gone 1-2 in those three games.

Eastern sits at 1-3, having its last three OVC games after winning the conference opener against Morehead State. Two of those losses have come to Belmont and Murray State.

Morehead State is 0-4 against OVC opponents and has lost 11-straight games overall. The Eagles’ only win this season came against NAIA opponent Midway on back on Nov. 21.

Southeast Missouri has lost seven in a row overall and each of its first five conference games.

Murray State players are also all over the individual leaderboards this season. Forward Katelyn Young leads the conference in scoring (20.3 points per game) and rebounding (7.9 rebounds per game), while teammate Macey Turley ranks fourth in the OVC in scoring and Alexis Burpo ranks second in rebounding per game.

Eastern’s Lariah Washington ranks fifth in the OVC in scoring with 14.6 points per game. Panther guard Kira Arthofer leads the conference with 4.7 assists per game.