Cushing steps down as football coach 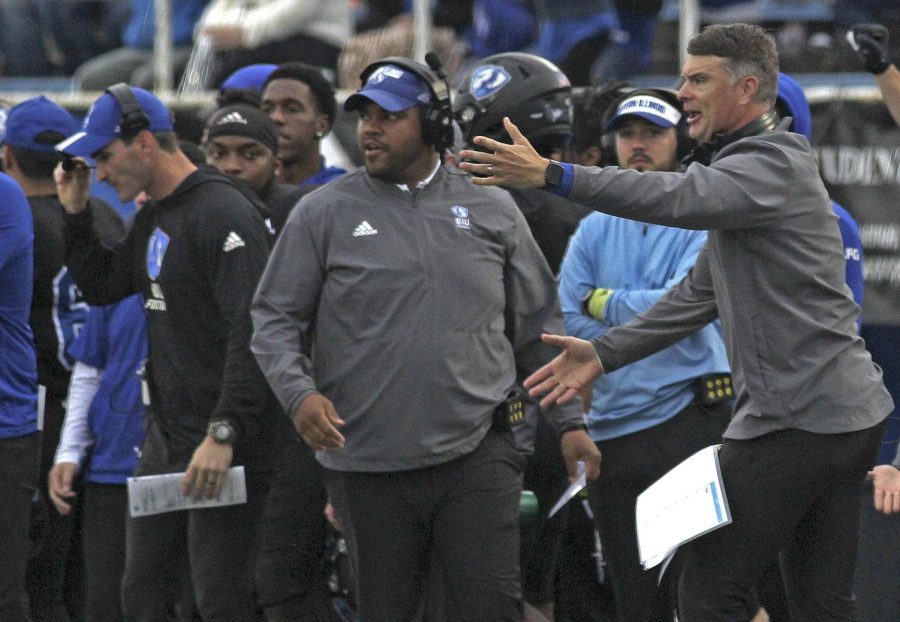 Eastern head coach Adam Cushing (right) expresses displeasures with a call on the field in Eastern’s Homecoming Game against Tennessee State on Oct. 23, 2021, at O’Brien Field. Eastern lost to the Tigers 28-0.

It was announced Tuesday that Eastern football coach Adam Cushing is stepping down to take the offensive line coach position as Duke.

“It was a very challenging decision because I love the young men here at EIU, I love everything about EIU, and it’s a great place with great people,” he said. “You can’t control when opportunities come your way sometimes, and every opportunity is about what’s best for my family and allow us an opportunity to have that conversation as a family, and ultimately that’s what played into it. It made it extremely difficult because of the people here at EIU and the type of place this is and how very close the program is to winning and getting ready to have an awesome year.”

Cushing said that the everything came together very quickly for this decision.

“Things happen really, really fast in this business, so the timing was incredibly quick,” he said. “Sometimes that’s how things play out.”

He also said he had an opportunity to speak to the team this morning regarding his decision.

“I just said to them that I love them and I understand that it’s probably not what they wanted to hear from me at that point, but I love them and I love this program,” he said. “I’m really proud of everything that they have built, and I mean that. This program’s in a great place. They’ve had so many wins off the field in so many different areas. Academically, socially, community, there’s so many great things and it’s because of the young men that are here, and that’s why I really feel the program is going in a phenomenal direction.”

“We have a solid foundation of young men in our program who have been doing the right things on and off the field,” Michael said. “The EIU football program has a long, rich tradition and we will bring in a coach that can continue to build upon that success with this group of young men we currently have in the program.”

It was also announced that Eastern will begin a nationwide search for Cushing’s replacement.

Cushing just completed his third season leading the Panthers and posted a 3-26 record and a 3-17 record in OVC play.

His departure comes just a few weeks after the announcement of Joe Davis as the next offensive coordinator for the Panthers. Davis was hired after the entire offensive coaching staff was let go following last season.