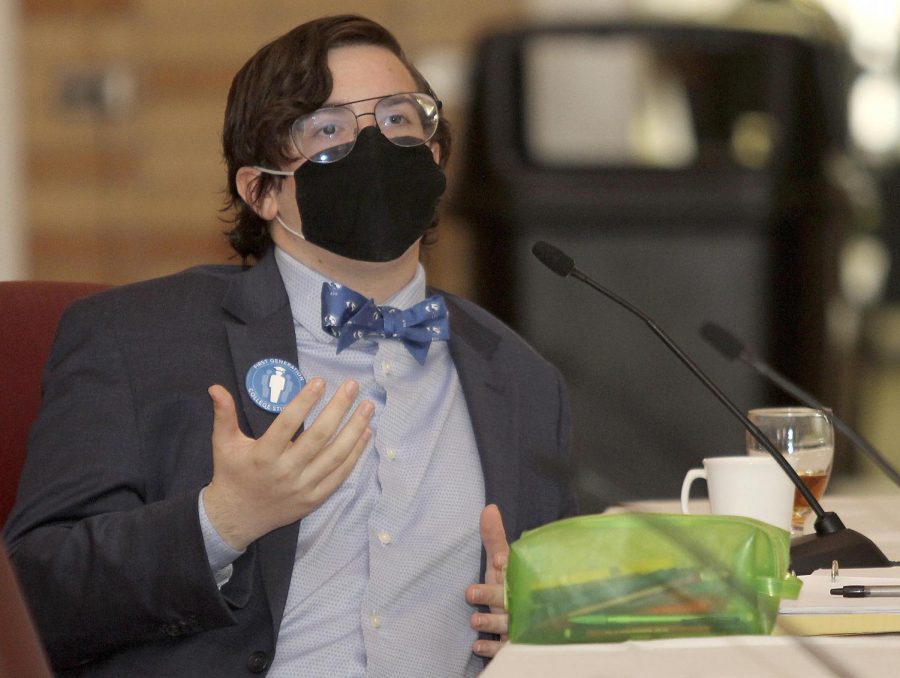 Student Trustee Payton Ade, a sophomore interpersonal communications major, speaks during the Board of Trustees meeting Nov. 12 in the Martin Luther King Jr. Union University Ballroom. During the meeting, Ade voted against a contract extension for University President David Glassman after speaking to student leaders who said they did not believe Glassman should have a contract extension. The one-year contract was approved and Glassman plans to serve as president until the end of his contract when he intends to retire.

The commission’s mission is to provide “Illinois students with information and assistance to help make education beyond high school accessible and affordable.”

Ade said they are looking forward to serving on the commission.

“I was surprised and overwhelmingly joyful, Ade said. “I was completely shocked when I got notified about my appointment.

They said they see their appointment as an opportunity to expand on something important to them, giving a voice to students.

“I hope to make sure that student voices are represented at the meetings. I have always wanted to be a voice for students and this position allows me to be that voice for not just students at EIU, but for students all across the state of Illinois,” Ade said. “We are living in unprecedented and uncertain times, and with that uncertainty, I believe that all voices need to be heard to move forward in society.”

Ade said they believe students need to have a voice in changes to education.

“I believe student voices need to be heard on these boards because they are directly affecting the lives of students. The boards are making decisions about higher education throughout the state and students are one of the groups most affected by these boards,” Ade said. “Sometimes boards and organizations do not take into consideration the students who they are affecting and I believe that the only way to stop that is to have student voices on those boards.”

Aside from Eastern’s Board of Trustees and their most recent appointment, Ade serves in multiple leadership positions across campus. They are currently Eastern’s representative on the Illinois Board of Higher Education’s Student Advisory Committee, Student Body Executive Vice President, vice president of EIU Pride, treasurer of the Political Science Association and secretary of the Stevenson Hall Council.

Ade said they are grateful to those who helped get them into the position to be appointed.

“I just wanted to thank all my mentors and advisors that have helped me get to this moment,” Ade said. “I also wanted to thank the Student Body because without them I would have never been able to have this position or any other position that I have ever had.”