Eras of The News 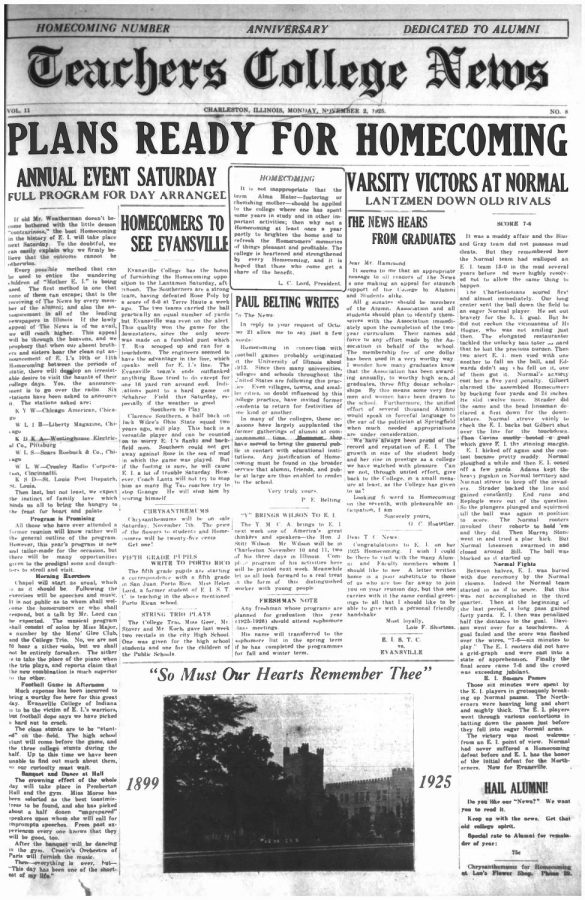 That first 1915 issue featured an announcement at the top and center of the front page.

“After many trials and tribulations ‘The Normal School News’ has at last been started, and this is our first issue,” it says.

The staff thanked the paper’s advertisers and encouraged students and alumni to subscribe and “boost” the newspaper.

The first issue featured a long article with detailed coverage of a football game against the Lincoln Presbyterians, a precede article for homecoming and several smaller articles about everything from a band performance to who was leaving campus to visit friends.

At this point, the paper was a private publication without financial support from the university and was printed in a local print shop owned by Bob Prather. Students could subscribe for 50 cents each semester.

This four-column, four-page paper, which sometimes featured editorial content on the front page, went bankrupt in 1921.

Control was offered to the university in return for funding and things changed drastically.

Editors and businesses managers at the Teachers College News were chosen by the Student Council, approved by the faculty committee and finally approved by the president of the university.

The paper was still only four pages, but the page size was increased to allow for more content, such as a “Merchant’s Directory.”

In 1926, an entire page of the paper was given over to the Teachers College high school to fill each week.

The News was increased to six pages to accommodate this change.

In 1931, a faculty-student board was created to select the editor and business manager.

A history of the newspaper published in 1935- just 20 years after the first issue- spoke highly of the current state of the publication.  At the time the history was written, the paper was still under the same control from the university.

“The News underwent something of a revolution beginning in 1929, and has continued to be in that state ever since, a revolution against getting into a rut,” a reporter wrote.

Articles did not list writers’ names at this point.

“The most immediate problem that confronted revolutionists was to stimulate interest in the school paper and develop a source of news and competent news writers.”

As a part of this effort, Franklyn Andrews began teaching an informal journalism class which was later made into an actual part of the curriculum offered at Eastern.

In 1930, the paper partnered with the Fox Lincoln Theater to create a contest for a team name for the university.

Three students tied as they all suggested “the Panthers,” beating out “the Greyhounds,” “the Blue Boys,” “the Blue Battlers” and the names of multiple Native American tribes.

Sigma Delta, a journalistic society, was formed in 1930.

The job of printing the paper was transferred to the owner of the “Charleston Daily Courier,” which had a more modern press, and the page count was increased to eight. Three years later, it was increased to 10.

At the beginning of Fall 1933, the News introduced the motto which is still placed below the flag on the first page: “Tell the truth and don’t be afraid,” quoting first University President Livingston C. Lord.

Editors and reporters at the paper buckled down for several years as either very little of interest happened at the News or the employees didn’t think they did anything worthwhile enough to record.

In 1959, advisor Francis Palmer resigned after the university asked editor Bruce Schaeffer to step down due to “increasingly inaccurate reporting.”

Schaeffer claimed it was actually because of anti-administration stances in recent reporting. The paper was suspended January through June of 1960.

It was suspended a second time for two weeks in 1964 after editor Jon Woods was fired for publishing an article about illegal “construction irregularities” which may have been libelous.

The state Legislature Audit Commission and a committee appointed by Governor Otto Kerner both investigated the construction “irregularities” and ended up determining that no illegal activity was happening.

Whe the paper began publishing again, publication was raised to twice a week, and name of the paper was soon changed to the Eastern News.

Printing moved to the presses of the “Effingham Daily News” in 1970 and then to the “Charleston Times-Courier” in 1971, where the News began publishing three times a week.

The paper went daily in 1973, though the name wasn’t changed to the Daily Eastern News until 1980.

At this point, the office was still located in the basement of Pemberton Hall, along with “the Warbler.” Student Publications were moved to the Student Services Building in 1975.

In 1981, Student Publications were moved to the North Gym of Buzzard Hall, which is now the part of the building where “WEIU” is located.

While Buzzard was being renovated from 1995-1997, Student Publications were moved to the sub-basement of the Martin Luther King Jr. University Union, beneath the bowling alley. The News was finally placed in the current newsroom at 1811 Buzzard Hall once renovations were complete.

On August 31, 1998, the News announced that articles could now be found at www.den.eiu.edu in an announcement which is surprisingly reminiscent of the announcement in the very first print issue, both in location and content.

“After many weeks of labor and planning, The Daily Eastern News is proud to present its new online version,” it says.

The website was much more simple than it is today; it only held the articles published each day.

The online location for the News moved a few times, as either the URL or server had to be changed, but it didn’t take long to get the www.dailyeasternnews.com URL which is still in use today.

As websites and the internet improved, so did students’ abilities to use them.

And yet, the print publication continued daily.

Now, the editor-in-chief is chosen by the newspaper’s advisor, and the EIC chooses the rest of the editorial staff. Other editors can hire reporters and photographers for their individual sections.

Even while taking full course loads, students write articles about news or sports and columns about whatever topic is on their minds. Photographers take everything from spot news photos to portraits for features.

The newsroom is most active in the evening as print deadline approaches and everyone hurries to finish writing, editing and designing.

Content on the website has grown with photo galleries, podcasts and videos which can be interspersed throughout news articles.

This expansion reflects what professional journalists are expected to be able to do- a little bit of everything.

Into the Next Era

This era of printing a physical paper every day is ending, but the News is still a daily paper.

Articles, columns, photos and everything else will still be published throughout the week, if only online.

The weekly print edition will hold highlights from the week and an updated design to reflect the changes coming to the Daily Eastern News.