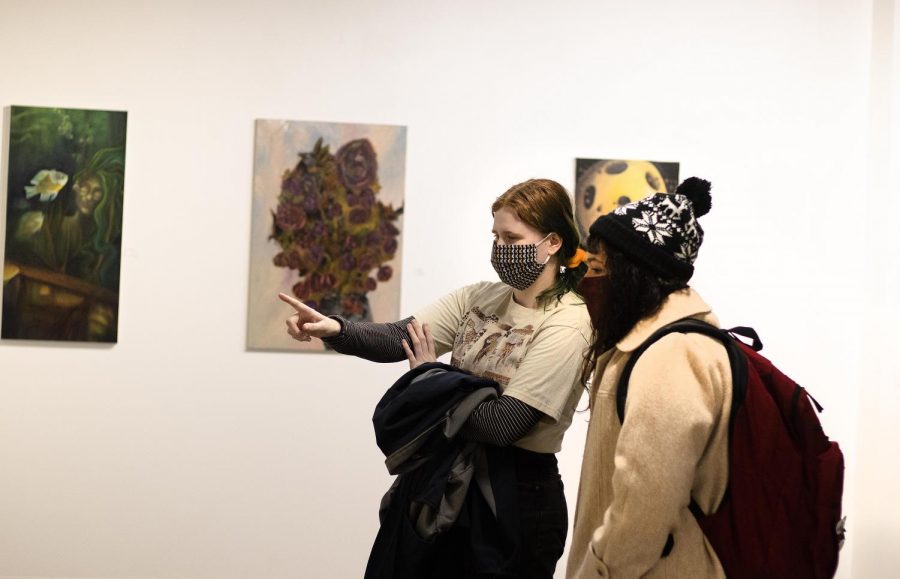 At Doudna Fine Arts Center Thursday afternoon, Sam Tolch, a junior art education major, and Angela Risinger, a junior 2D studio art major, talk to each other about the showcased paintings inside the Glenn Hild Student Art Gallery that were created by students.

Students in Eastern’s Advanced Painting class had the opportunity to showcase their semester’s work on Thursday evening in Doudna.

Chris Kahler, who teaches Painting 2 through 6, said the class is taught as one block that sees students in the second level working with those in the sixth during a two and a half hour time period twice a week. Kahler said all the work that was being displayed in the show was done by about 15 or 16 students.

“These students are all either in one of those levels, and some of them are actually in both levels of some, like four and five at the same time, so they’re having to make more work,” Kahler said.

The event was a chance for those in the art department to see what their students had been working on over the course of the Fall 2021 semester.

“This is really just a show showing you all the work that they’ve been working on this semester, and it’s an opportunity for us to see what they’re thinking about, but also see the level of quality as well as a level of excellence that we’re able to achieve,” Kahler said.

The assignments varied based on level, Kahler said. Students in Painting 3 had to make three paintings that tie into a concept, while levels four through six needed to make a “whole body of work,” which could consist of six to eight paintings about a specific theme.

While the event was an opportunity to display a semester’s worth of work, Kahler said it’s also a learning moment for students who don’t have experience selling their art.

“The bottom line is, for a lot of the students, this might be the first time they’ve really sold their paintings,” Kahler said. “And so it’s hard to know what’s a fair price… And the other thing too is that what I’m trying to get the students to understand is that it is so important to share your work with people, to have people want the work to be in their home or in their office. That means everything, because it not only acknowledges your hard work, but it also rewards you for your hard work.”

Eli Jones, a junior art major, had four works featured in the show based on a mission trip to Puerto Rico.

“What inspired these four pieces was being on a trip last summer in Puerto Rico, mostly in the San Juan area,” Jones said. “My mom and my younger sister and I helped put together a summer English camp at one of their local churches. It lasted for three weeks, and then during our fourth week, we helped out at another church, and that involved helping out at a Vacation Bible School.”

Jones’ two favorite pieces were a portrait of a girl and another of three parrots, both of which involved experiments with texture, he said.

Thursday’s show was Jones’ second, he said, and he said it was a fun experience.

“[I got] lots of really nice compliments from people seeing my work, whether it be parents of students and my friends and colleagues in the program and instructors,” Jones said.