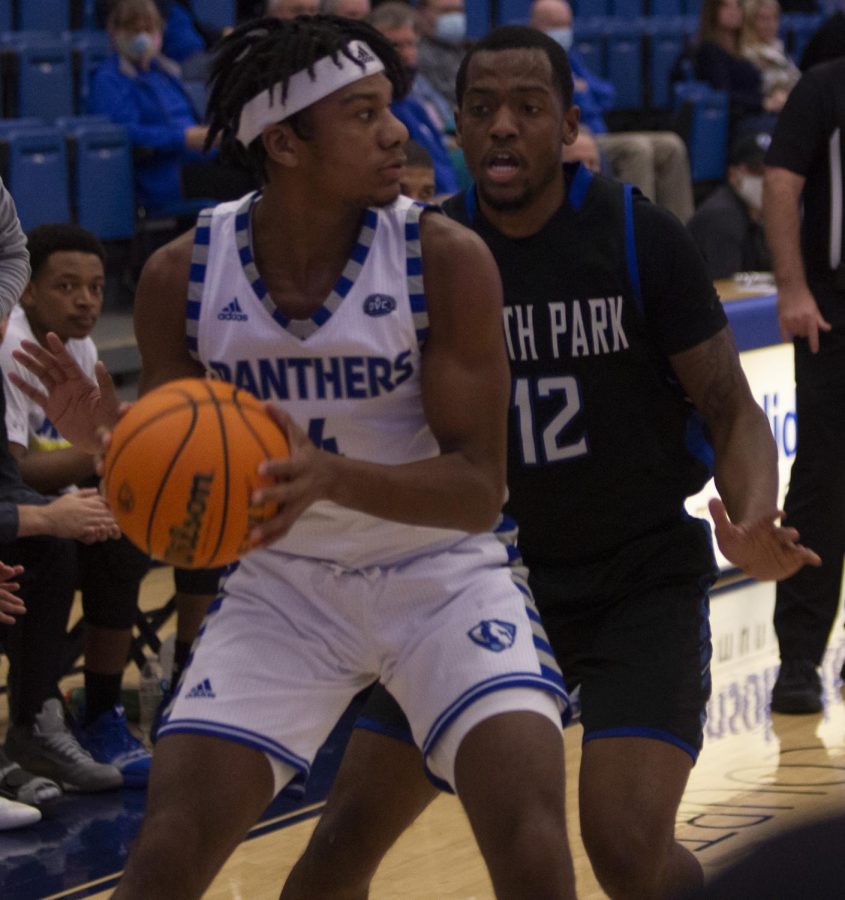 Eastern guard CJ Lane looks to pass in Eastern's game against North Park on Dec. 4 in Lantz Arena. The Panthers won the game 76-71.

The Eastern men’s basketball team is now 2-8 on the season and are currently sitting at ninth place in the OVC after coming off a 72-44 loss to Missouri. Let’s see how the rest of the conference compares.

The Panthers are last in the OVC for scoring, averaging 58.1 points per game and are ninth for offensive rebounds with 8.6 per game.

Junior forward Jermaine Hamlin led the Panthers on Tuesday evening with 10 points. Hamlin is tied for second in the OVC for blocked shots per game with 2.0 and is tied for 48th place nationally.

Tennessee State is sitting at last place in the OVC with an overall record of 1-6 after losing to Chicago state 59-49. The Tigers are second in the conference for three-point percentage with 36.9 percent per game.

Kassim Nicholson contributed 16 points and 12 rebounds against the Cougars, posting his third double-double of the season. Nicholson is second in the conference for rebounding with 9.4 per game and 26th for scoring.

Murray State is currently sitting at the top of the conference with a record of 7-1 after beating Middle Tennessee 93-87 last Saturday.

Burns led the Racers in rebounds with 15 followed by Williams with 12. The Racers are first in the OVC in scoring, averaging 83.4 points per game. They are also first in rebounding with 38.6 per game.

Belmont is second in the conference with a record of 8-3 after beating Saint Louis 64-59 yesterday evening. The Bruins are averaging 77.8 points per game and is currently first in the conference for assists (17.2) and steals (8.9).

The Bruins had three players in double digits: Will Richard (15), Grayson Murphy (14), and Nick Muszynski (12). Murphy led the team with eight rebounds.

Morehead State is third in the conference with an overall record of 7-3 after beating Presbyterian Blue Hose 71-66. The Eagles had three players in double digits: Johni Broome (17), Ta’Lon Cooper (11), and Jaylen Sebree (13).

The Eagles are first in the conference for blocked shots with 6.9 per game. They are first in scoring defense with 63.8 per game.

Austin Peay is 4-3 overall, putting them at fourth place in the OVC standings. The Governors beat Milligan 98-55 last Sunday after shooting a season-high 59 percent from the field.

The Governors were led by Tariq Silver with 20 points and had five other players in double figures: Caleb Stone-Carrawell (17), Alec Woodward (12), Carlos Paez (11), Cameron Copeland (10), and Elijah Hutchins-Everett (10).

Southeast Missouri is fifth with an overall record of 4-4. The Redhawks are coming off a win after beating Webster 76-64.

The Redhawks finished with a 41.8 percent from the field and were led offensively by Eric Reed Jr. (26), Manny Patterson (14), and Nygal Russell (11).

SIUE is sixth in the conference with an overall record of 3-6. The Cougars are coming off an 80-55 loss to Bradley. They were led offensively by Ray’Sean Taylor who had 22 points.

UT Martin is seventh in the conference with an overall record of 3-6 after coming off an 81-64 loss to Western Illinois. KJ Simon led the Skyhawks offensively with 19 points and 12 rebounds.

Tennessee Tech is eighth in the conference with an overall record of 2-6 after losing to Evansville 59-51. The Golden Eagles were led offensively by Jr. Clay who had 15 points.