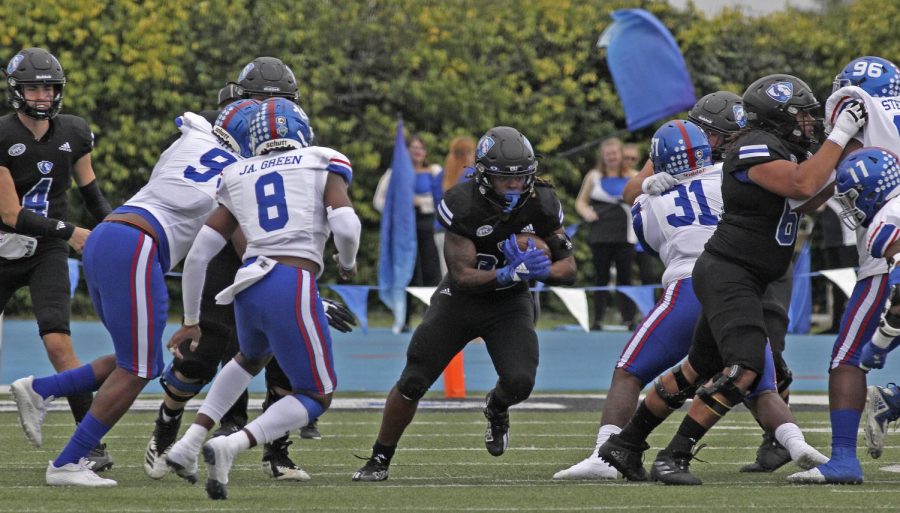 Eastern running back Harrison Bey-Buie attempts to run the ball past the Tennessee State defensive line in the Panthers' Homecoming Game on Oct. 19 at O'Brien Field. Bey-Buie was named to the OVC All-Newcomer after the season.

The Eastern football team had several players receive recognition for their 2021 season performance as the OVC announced the All-OVC teams and award winners last Tuesday. Let’s take a look at who took home the major awards.

Arguably one of the most sought-after awards in the OVC is OVC Offensive Player of the Year. This year, it belongs to quarterback Keon Howard of Tennessee-Martin.

Howard, a graduate student, completed 59.7 percent of his passes, passing for 1,811 yards and 15 touchdowns. He carried the ball 95 times for 474 yards to pick up 10 scores. His performance this season has earned him a 24th national ranking in touchdowns, 27th in points per game, and 50th for total offense, averaging 207 yards per game.

Junior safety Koby Perry of Austin Peay took home OVC Defensive Player of the Year. Perry finished the regular season with 19 interceptions and 26 turnovers gained, earning him the first ranked spot in the FCS. He led the Governors with 85 tackles, 51 of those being solo, including eight tackles for loss and a sack.

OVC Freshman of the Year was taken home by quarterback DJ Williams of Murray State. Williams started the 2021 season as the Racers’ backup quarterback but was forced to step up in the fifth game of the season. Since then, Williams has proved to be a reliable candidate for the starting position.

Williams finished the regular season with 1,020 passing yards, passing for three touchdowns. He rushed for 532 yards, averaged 6.4 yards per carry, and picked up six scores on the ground.

As for the Panthers, a total of seven players earned All-OVC honors with four second team All-OVC selections and two players on the All-Newcomer team.

Redshirt sophomore linebacker Jason Johnson made first-team All-OVC Defense for the second straight season. Johnson led the OVC in tackles with 112 and was seventh in the FCS in solo tackles with 63.

Despite missing a large portion of the season, wide receiver Isaiah Hill made second-team All-OVC Offense, Hill ended the season with 39 catches for 493 yards, passing the 1,000-yard receiving mark for his career.

Freshman running back Harrison Bey-Buie was one of the two Panthers named to the All-Newcomer team. Bey-Buie led the Panthers’ rushing game with 479 yards, including four touchdowns. The other Panther, Junior cornerback Russell Dandy, finished the season with 31 tackles and two interceptions.