Richard Lumpkin and his namesake hall 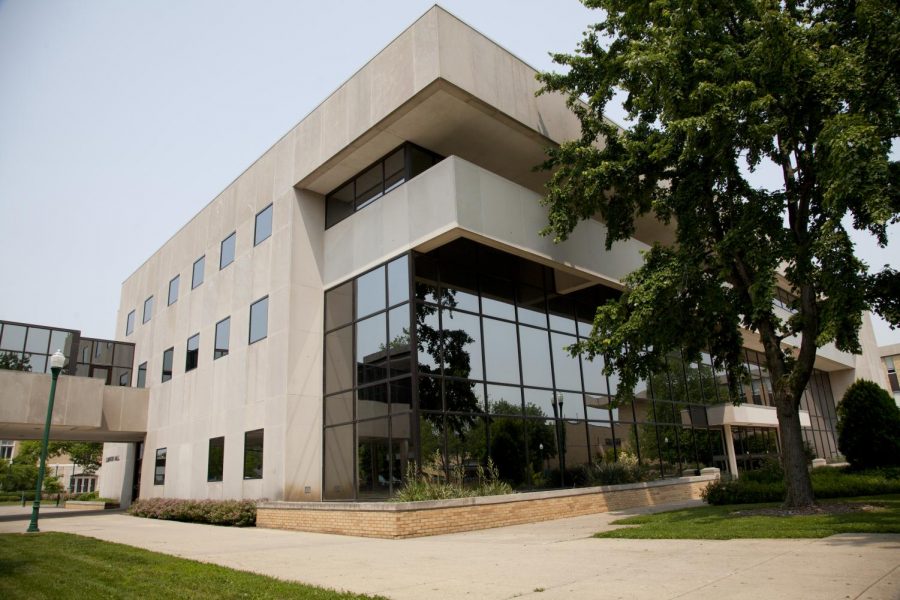 Lumpkin Hall is named after Richard Lumpkin, a man who supported Eastern through financial contributions. The building was named after Lumpkin in 1990.

On Nov. 27, 1990, Illinois’s longest serving governor James Thompson dedicated a new building that would hold Eastern’s College of Business, nestled in between Klehm and Coleman, to Richard Lumpkin.

According to a university press release from that day, Thompson said that facilities like the one he spoke of could provide Illinois with more prepared businessmen and women.

“In a business world that is constantly becoming more competitive, it is imperative that young people entering the business world be more skilled and knowledgeable,” Thompson said. “By providing high-caliber educational facilities and faculty, the state helps to provide Illinois students with an advantage. A better-educated, better prepared work force is just one advantage that Illinois receives in return.”

“Today we dedicate a dream. This magnificent new home of the Lumpkin College of Business provided by the people of Illinois for the education of students in the disciplines of accountancy and finance, business education and administrative information systems, computer and operation management, and management and marketing. Generations of Eastern students will benefit from the investment in the state-of-the-art facility,” Rives said.

Richard Lumpkin, according to another 1990 Eastern press release, was the chairman of the Board of Illinois Consolidated Telephone Company and the chairman of Consolidated Communications. In addition to having the building named after him, the year prior to the dedication he was honored with a life-size bust in the Tarble Arts Center, “in recognition of his many years of support.”

While Lumpkin didn’t attend Eastern, he supported the university through gifts like the Lumpkin Foundation Fund, which supported what at the time was still called the EIU School of Business.

Prior to the $6.23 million construction of Lumpkin Hall, which has a gross square footage of 58,580 feet, business students were going to class in six different buildings. The building also houses the School of Technology.

The press release details that the hall was being built with state money, but that a campaign called “Taking Care of Business” provided funds for “some furnishings and equipment.”

A May 6, 1989 university press release quotes Ted Ivarie, dean of the College of Business, as saying that while the state had been generous, the campaign, which aimed to raise $500,000 before Sept. 1 of that year, was necessary to completely furnish the building.

“The State of Illinois has been generous within its own severe budgetary restrictions in giving our building a high priority,” Ivarie said. “However, the anticipated equipment allocation indicates that we will need an additional $500,000 to completely furnish the building.”

The building was scheduled to be completed in the fall semester of 1990, and the fundraising campaign had a deadline of Sept. 1 of that year. The May ’89 press release includes extensive details of the features that would become available to Eastern’s business students.

In 2009, Lumpkin was one of four people to be inducted as lifetime members of the Eastern Illinois University Foundation, along with former Illinois governor Jim Edgar and his wife Brenda, and Burnham Neal.

According to the Oct. 2009 press release, “Lifetime membership is bestowed upon individuals who have demonstrated exceptional and significant support for the university.”