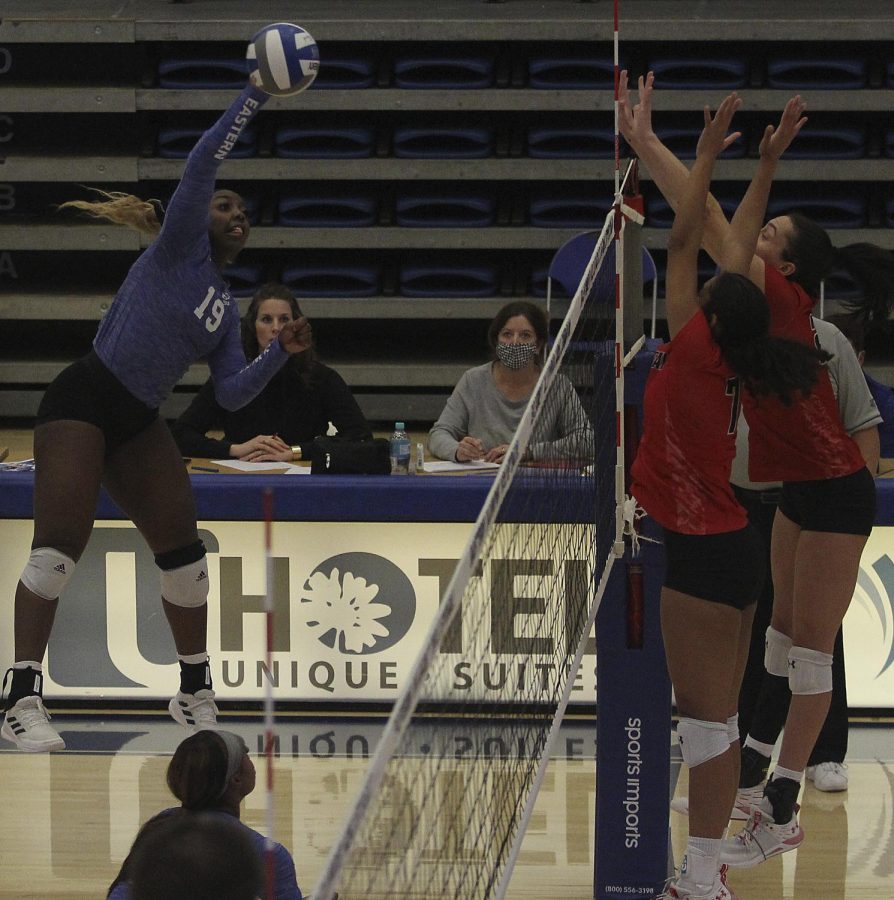 Eastern outside hitter Danielle Allen swings on a kill attempt in a match against Austin Peay on Nov. 13 in Lantz Arena. Allen had a team-high 22 kills in the match, which Eastern lost 3-1.

The OVC announced its postseason volleyball awards Wednesday, on the eve of the OVC Tournament.

Eastern, which will play Southeast Missouri Wednesday in what it the Panthers’ first OVC Tournament appearance since 2017, had representation on the All-OVC first team for the second-straight season.

Senior outside hitter Danielle Allen was given the All-OVC honor after finishing fourth in the conference in kills per set with an average of 3.53.

Allen upped that number in the Panthers’ final seven matches, averaging 4.72 kills per set. Her success during this stretch was instrumental in the Panthers’ postseason push, as the team went 4-3 in those matches and clinched the eighth and final seed in the tournament.

Her 342 kills on the season were the most by an Eastern player since 2014 and are the 16th-most in a single season in program history.

The Panthers were 4-14 in conference play this season.

Eastern’s opponent Southeast Missouri had plenty of representation in the postseason awards.

The Redhawks earned the OVC regular season title with a 14-4 conference record. Their overall winning percentage of .767 was the highest in the conference.

Racers’ outside hitter Brooke Watts was named OVC Freshman of the Year. She led the conference with 4.58 kills per set, which ranked 15th in the nation this season.

Libero Becca Fernandez was named OVC Defensive Player of the Year. She led the conference with 5.50 digs per set which ranked sixth in the nation.

The Racers finished with a conference record of 11-7, placing them fifth in the OVC. They will play four seed Tennessee-Martin Thursday.

The semifinals will take place Friday with the championship match scheduled for Saturday at 6 p.m.