Panthers compete in A3 Performance Invite 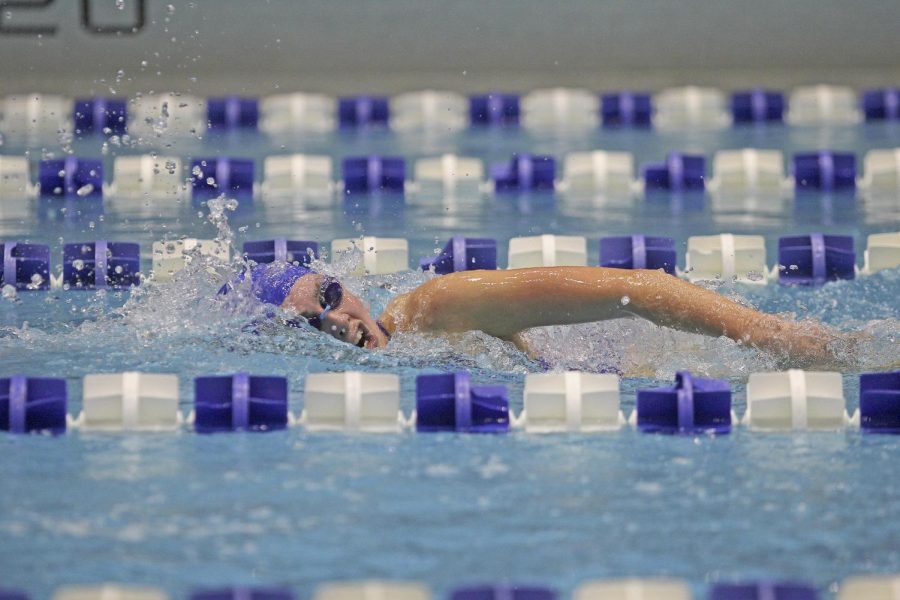 Eastern freshman Emma Ballantyne competes in the 1000 yard freestyle in a meet against Ball State on Oct. 29 at Padovan Pool. The women’s swimming team lost the meet 174-84.

The Eastern men’s and women’s swimming teams competed in the A3 Performance Invite Thursday through Saturday, with the women placing fourth and men placing fifth.

The event, held in Carbondale, featured host Southern Illinois, Eastern, Bellarmine, Evansville and Valparaiso and is the last event for Eastern in the month of November.

They will compete again Dec. 4 against Bellarmine, which will be hosted by Indiana State.

The Panthers had 11 A Final finishes in the invite.

The highest finisher was Kennedy Darensbourg on the women’s side. She finished second in the 1,650 freestyle with a time of 17:47.72.

Elsewhere on the women’s side, Camryn Lewis picked up a fourth-place finish in the 50 freestyle with a time of 24.02.

Emma Ballantyne, Izzy Glasgow and Maddie Pittman also reached the A Final on an individual basis.

Ballantyne placed seventh in the 400 individual medley with a time of 4:40.99.

Glasgow also placed seventh while competing in the 100 fly. She posted a time of 58.98.

The 200 freestyle relay team consisted of Lewis, Kaylan Ottosen, Autumn Grinter and Sabrina Chu. The 200 medley relay team was made up of Olivia Viele, Ashley Glesing, Ottosen and Lewis.

Both teams finished third in their relays.

On the men’s side, Spencer Wilson and Forrest Baumgartner had the highest individual finishes.

Wilson and Colston were joined by Payton Buse and Dismas Dillon in the 400 freestyle relay. The team placed fourth with a time of 3:06.55.

Alex Adams and Colin Feliciano also reached the A Final. Adams placed eighth in the 200 backstroke. He also won the 100 fly in the B Final.

Southern Illinois’ men’s and women’s teams both finished first overall in the invite. Evansville and Bellarmine placed second and third on both sides respectively.