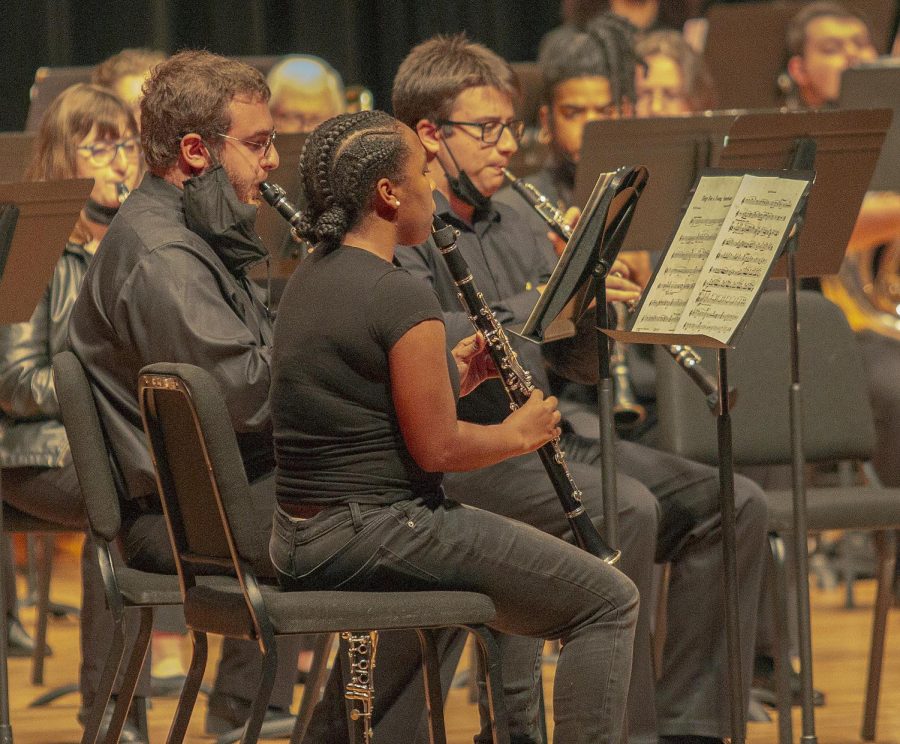 Eastern’s Wind Symphony and Concert Band shared the stage with an American flag on Thursday for a concert that showed its support for veterans through performances of pieces like “The Star-Spangled Banner” and “America, the Beautiful,” the two of which bookended the evening.

The Concert Band performed the first five songs of the concert and after a brief intermission and expression of gratitude to veterans, the Wind Symphony took the stage for four pieces that included Vincent Persichetti’s “Symphony No. 6 for Band, Op. 69.”

Each branch was recognized during the “Armed Forces Salute,” performed by the Wind Symphony, where members of each branch were invited to stand for recognition upon hearing their song.

Following “The Star-Spangled Banner” was “Elegy for a Young American,” composed by Ronald Lo Presti in 1967 as a tribute to John F. Kennedy after his assassination.

“Paper Cut,” composed by Alex Shapiro, featured the members of the Concert Band crinkling, crumbling and tearing pieces of paper rhythmically as music played through the Dvorak Concert Hall’s speakers.

Also played was Omar Thomas’s, a professor at the University of Texas at Austin, interpretation of “Shenandoah,” a traditional American folk song.

The performance concluded with Samuel Augustus Ward’s “America, the Beautiful,” the climax of which had an American flag drop from the rafters.

Edward Bagger, a U.S. Army and Vietnam veteran, said he appreciates Veteran’s Day because it provides an opportunity for veterans to be thanked for their service.

“It’s nice that we have a day where you can just kind of say thanks,” Bagger said. “Most people don’t realize what they’re asking someone to do when that person goes into the military, and you hope nobody does. Although it seems to be a recurring enterprise of the species, but it’s kind of nice to have at least someone say good on you.”

Alicia Neal, associate professor of music and the bands’ conductor, declined to comment.