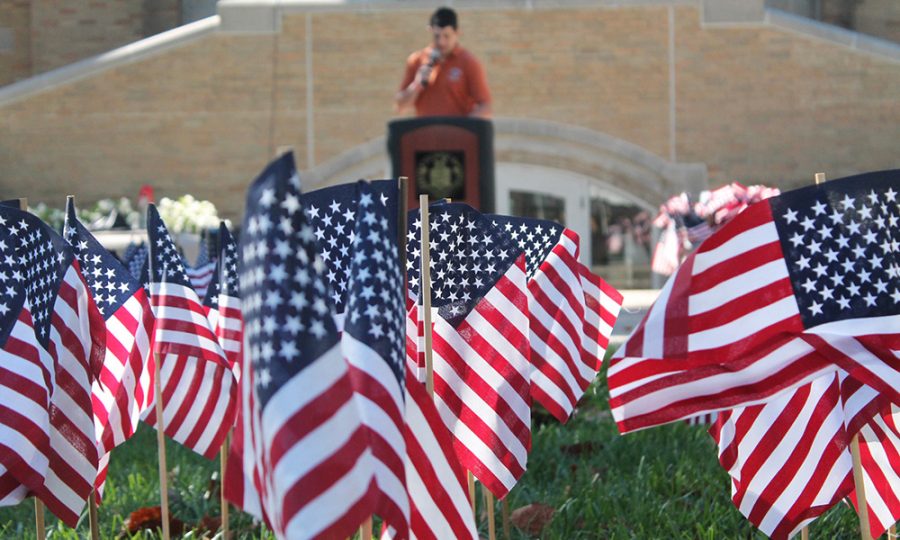 Blake Leitch, a veterans service officer, gives a speech during the 9/11 memorial in 2018. His speech encouraged connecting with others after times of tragedy.

Today is Veteran’s Day, and we at the Daily Eastern News feel it is important to use this day as not only a way to support veterans, but also an important time to bring awareness to the struggles veterans face and how we could help.

There are about 18 million American veterans today and many of them face struggles once they return home after serving in the military.

Many veterans struggle with the transition back to civilian life after being in the military.

The military is ruled with schedules and commanders determining everything soldiers do in a day, so returning to civilian life where there’s only a strict schedule if they make themselves a schedule and where they have to decide on what they’re doing again individually; it can be hard.

There’s also an effect from how each individual veteran processes trauma.

For some people, they can compartmentalize trauma for a while before they start to process it, whereas for others, once they’re back to civilian life all the trauma comes back.

Along with newly returned veterans, veterans who have been back in civilian life for quite some time also struggle with civilian living. In the past there were even fewer resources for veterans than there are now for veterans, so essentially these veterans were never given help after they returned home.

The U.S. Department of Veteran Affairs, the VA, has multiple programs for veterans including health programs which include therapy, homeless assistance programs, programs to help veterans with finances and more.

However, only a limited number of VA facilities and programs are near Charleston.

Mattoon has a VA Clinic only 10.8 miles from Charleston, but the only other facility available near Charleston, is the Urbana Vocational Rehabilitation and Employment Office which is 42.2 miles from here.

Also, these facilities are only helpful if veterans have a way to get there, which many do not.

Many veterans don’t have access to a car to be able to get to these facilities, and in this area of Illinois, there aren’t very many transportation options.

A way we could help our veterans could be getting more resources near Charleston and creating a public transportation system, so those who want to use these facilities can get to them.

After everything veterans do for us, we are responsible for helping them transition back to civilian life.