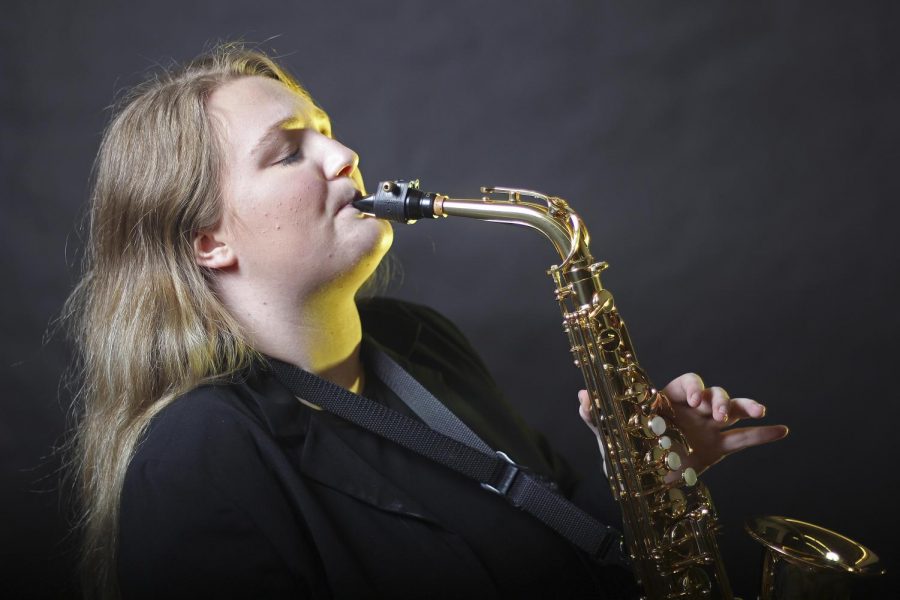 Kirsten Hetzel, a sophomore music education major, plays the saxophone in honor of National Saxophone Day. Hetzel has been playing saxophone for nine years Hetzel said she plays because of the self improvement quallities. “I fell in love with playing it for myself and now I really enjoy playing it and challenging myself with new areas of the instrument.”

The saxophone: A single-reed woodwind instrument known for its raspy tones and buzzy texture. An instrument popularized by jazz bands and musicians in the 1920s. An instrument that is known for allowing players to express their individuality.

This soulful instrument is celebrated on National Saxophone Day, which falls on Nov. 6, the birthday of Antoine-Joseph ‘Aldophe’ Sax, the inventor of the saxophone.

Though the saxophone is known for what it brings to the world of jazz, it is also an instrument used in classical music.

It is an instrument we see students play in Eastern’s many bands and ensembles.

J’than Ross, a freshman music education major, has been playing the saxophone for six years.

Back when Ross was in sixth grade, his school’s band had a day specifically for picking out instruments, and to his surprise, he chose the saxophone.

“The funny thing is, I came in and initially the one instrument I didn’t want to play was the saxophone, as odd as that is,” Ross said. “But as I was going throughout trying out all the instruments, trying to figure out what suits me the best, I got the saxophone.”

Katie Smith, a senior music education major, plays the saxophone for Eastern’s wind symphony, jazz ensemble and Panther Marching Band. She said she chose to “participate in multiple ensembles to have a diverse playing experience with a variety of groups.”

She said she has been playing the saxophone for 11 years.

“I originally chose it because I loved the sound of it and how it looked, and I wanted to learn an instrument with a lot of keys,” Smith said. “I quickly learned to love the unique musical parts saxophones get to play.”

She said that when she was first learning the saxophone, she “was just happy to be making noise like most other fifth graders.”

“Saxophone is one of the easier instruments to make a sound on but in the beginning stages the sound usually resembles a honking goose,” Smith said. “So, over the past 11 years I’ve been working on refining my first obnoxious sounds into sounds worth listening to. Looking back on my progress is always encouraging because I’ve come a long way in developing a nice classical saxophone sound, even in just the last couple of years.”

“A lot of people will say that the saxophone is one of the easiest instruments to learn, and I don’t disagree,” Ross said. “It’s not the most difficult instrument by any means. Overall, it’s a quick development, a quick pick-up for a lot of people.”

Despite that, learning to play the saxophone comes with its own unique set of challenges and different skills one must learn to continue improving as a musician.

“It is really hard picking up the small things when learning how to play like learning vibrato, which is kind of like a wavering noise you hear when you hear a note,” Ross said. “That was definitely hard for me. I’m still even learning that today.”

As for Smith, she said she has faced challenges when trying to perfect technical passages in her saxophone playing.

“Technical passages in music require musicians to coordinate the movement of multiple keys/fingers at once along with the tongue,” Smith said. “Working these passages can be incredibly tedious, playing only 2-4 notes at a time and getting through only a portion of the music in a practice session. Detailed practice time is the best solution to many challenges I face on the saxophone.”

Ross joined his high school’s marching band his freshman year of high school, following in his mother’s footsteps who was also “a band kid growing up.”

That journey led him to playing for Eastern’s concert and marching band.

“Marching band is kind of like an amazing family environment, really,” Ross said. “It’s competitive as well. It’s just a really fun thing to do, and I enjoyed it a lot during high school, so coming to college, I was like ‘I might as well continue,’ and it’s been an amazing year so far.”

Smith also shared her love for playing as part of an ensemble.

“I love getting to play in ensembles because I get to hear all of the different parts being pieced together like a musical conversation,” Smith said.

She said she also loves performing the saxophone because she loves “getting to share the music I’ve been working on with other people” and loves the range of parts saxophone players get to play, especially in concert band settings.

“We get to play everything including quick woodwind runs, high brass fanfares, soaring countermelodies, and rhythmic low brass parts which makes all of our music exciting!” Smith said.

For Ross, what he enjoys the most about playing the saxophone is that it makes it feel easy for him to express himself creatively.

“That’s kind of just the atmosphere around saxophone-playing. It’s about creativity,” Ross said. “There’s a lot of creativity. A lot of improv.”

Smith said that it is never too late to learn to play the saxophone or any other instrument.

“You can play anything at any time,” Smith said. “Multiple short practice sessions are key to creating good habits on a new instrument but just know that you can do it!”

Ross’s advice for future saxophone players: Make sure you enjoy the instrument you are learning to play.

This advice comes from Ross’s personal experience, as there have been times he tried learning new instruments but did not like playing them or could not commit to them. He said to not try learning an instrument you do not like, “because if you do, you’re not gonna wanna practice.”