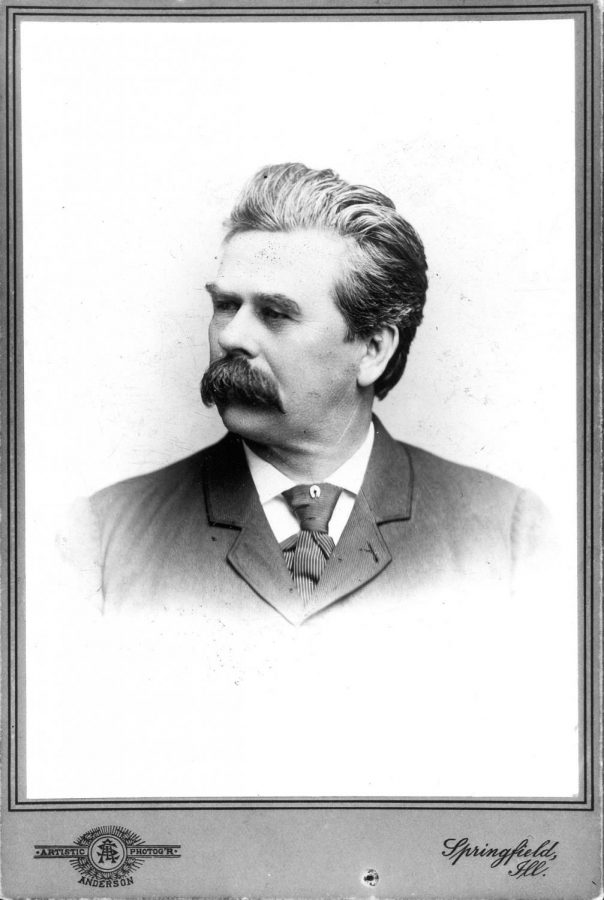 Samuel M. Inglis, Eastern's first elected president. Inglis was unable to serve in the position of president because he died shortly before he was set to begin.

Livingston C. Lord served as Eastern’s first president, serving in his role from the founding of the institution in 1898 until his death in 1933, but he was not Eastern’s first elected president. That title is held by Samuel M. Inglis.

Inglis was elected as president of Eastern Illinois Normal School on April 12, 1898. He was set to start his role as the newly-founded institution’s president in Sept. 1899 but died June 1, 1898 while on vacation in Kenosha, Wisconsin.

He died in a sanitarium while chatting with friends, according to volume 11 of “The School News and Practical Educator.” The book states that services for Inglis were “attended by very many of the leading educators of Illinois, who came from all quarters of the state.”

The book highlighted his career in education and what led him to being a distinguished member of higher education in the late 1800s.

Inglis spent several years of his life being educated and educating in Illinois, starting from when he moved to Illinois from Ohio in 1856 where he began his early education.

He furthered his education at Mendota Collegiate Institute, now Aurora University, and graduated in 1861, just in time for the Civil War.

Inglis was in the 104th Illinois Infantry but was discharged shortly after joining due to a disability. His brother took his place in the war and was killed in Knoxville, Tennessee, being one of the 194 men who died during service from the regiment.

After his stint in the war, Inglis taught as a professor before becoming supervisor of the Hillsboro Academy from 1865 to 1867. He then became the superintendent of public schools in Greenville, a position he served in until 1883.

Under former Illinois Governor Shelby Cullom, he was a trustee of Southern Illinois Normal University, the same institution in which he was made a professor of mathematics. Inglis was then transferred to the position of chair of literature for Carbondale University in 1886, a position he served in for eight years.

In 1894, he was elected superintendent of state education and was in that position at the time he became president-elect of Eastern Illinois Normal School.

Inglis was remembered fondly after his death, so much so that a resolution was made to honor him shortly after he died. It stated:
“That as state officers we learn with most sincere and profound regret of the death of State Superintendent of Public Instruction Hon. Samuel M. Inglis, and that we desire to place upon record our appreciation of the many virtues which have characterized him during his long and able public career. His acknowledged ability has long since placed him in the front rank of educators. His efforts as teacher, professor and as state superintendent of public instruction form no small part in the history of the advancement of education in this great state.

Prof. Inglis was not only a hard worker and a recognized leader in the ranks of his profession but he was a man of sterling Christian character and was a true type of the highest order of American citizenship. His mind was broad and liberal. His heart was tender and sympathetic, and the hundreds of young men and women in this state who have been encouraged by his kindly help in the struggle for an education will join with us in lamenting his death. To his wife we extend our most profound and heartfelt sympathy.”
In a speech to the Illinois State Teacher’s Association given by Joseph Freeman shortly after Inglis’ death, in part read:
“Truly the influence of a noble, manly life never dies; its power for good is immeasurable. Its computation will not be ended with the short span of existence in this world. The waves of its influence keep moving on and limitless.

For the reason that State Superintendent Inglis was a thorough scholar, an accomplished teacher, an upright citizen, and a capable state official, I honor him, but because he was a man of true nobility of soul, of purity of thought and of the noblest qualities of the human heart, I love him, and would seek to adorn him with the evergreen and laurel in memory of his faithful virtues and exalted Christian character.”
A former student of Inglis who was quoted in the speech said, “Who of us can forget his great heart, his warm hand and his unselfish devotion to our interests? His kindly humor, his unfailing cheerfulness, his vigorous thinking and truthful earnest brought hum the unbounded affection of the students who sat at his feet.”