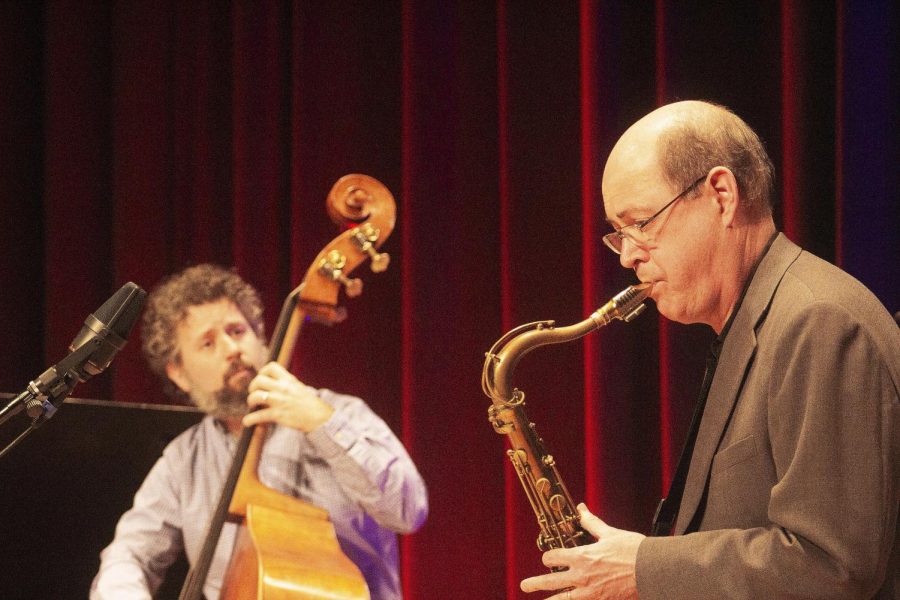 The quartet was made up of Sam Fagaly on the saxophone, Paul Johnston on piano, Andrey Gonçalves on bass and Jamie Ryan on percussion. They performed seven songs, five composed by themselves and the remaining two by Victor Young and Miles Davis.

The proceeds from the event supported the David Tanner/Ronald Gholson Fund: Celebrating the Goodness of Music. According to the evening’s program, “Over the past 12 years, this fund has helped support equipment, travel, scholarships and guest artists for the Jazz Studies Program.”

Gholson, a former professor at Eastern, was in the audience for the concert.

Emily Thorpe, a sophomore majoring in music performance and musical theatre, said she wanted to attend the concert to learn from the faculty that was playing.

Addison Gladu, a senior jazz piano major, said she attended because she also wanted to see the lessons come to life.

“We spend a lot of time in class talking about jazz theory and about improvisation, and seeing examples on paper, but here we get to hear it live and we can hear it spontaneously, which is the true essence of jazz, and it’s very inspiring to hear them play and to hear their genius work,” Gladu said.

Although Thorpe plays trumpet at Eastern, she said Ryan’s percussion performance in one of Johnston’s compositions stood out.

“I also drum at the church here at (Christian Campus House) and I really loved what Dr. Ryan did on ‘Spring’s Arrival,’ how he used the brushes,” Thorpe said.

Thorpe also said she saw some of Johnston’s lessons take shape in his improvisations during the concert.

“I listened a lot to what Paul does improvising-wise because he’s my teacher so I can hear some things that he’s talked about in class that he uses himself and hearing it in context and over this type of music is really important,” Thorpe said.

Gladu said the piece that stuck out to her was Ryan’s because of its danceability and the spirited performance of the musicians.

“I really enjoyed Jamie Ryan’s ‘Splinters,’” Gladu said. “Because of the combination of Afro-Caribbean rhythm and… spirited playing and such great interaction. It was very entertaining. And it made me want to dance.”

Gladu also said that seeing the jazz faculty play their own music was enlightening because she got to see their creativity at work.