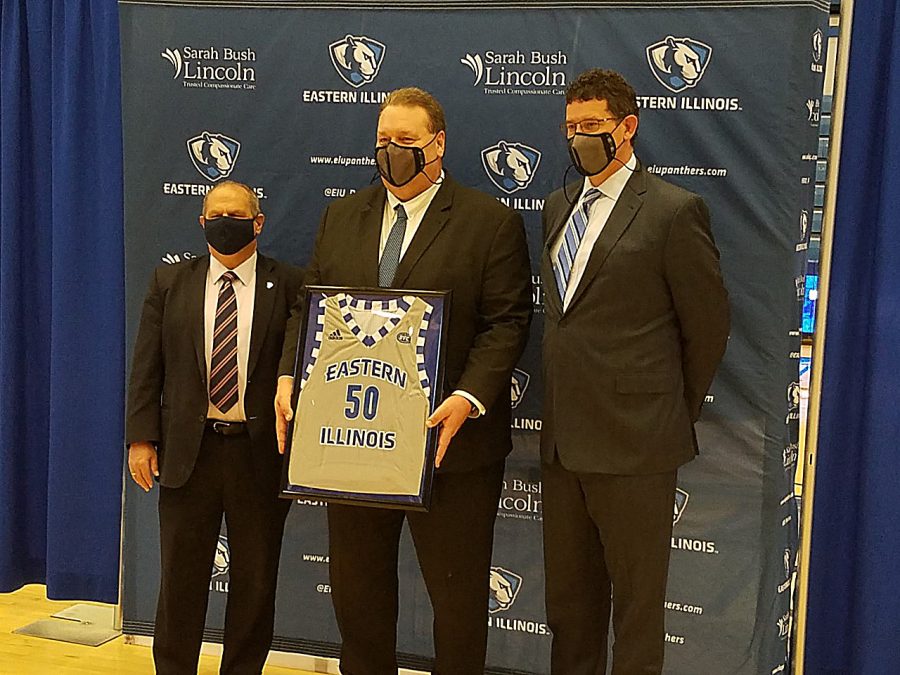 The Eastern men’s basketball team is set to begin its season on Nov. 9 against Northwestern for the two schools’ third-ever matchup. The Panthers have lost both games.

The game, and the 2021-22 season, are the first with new head coach Marty Simmons, who came from a special assistant coaching spot at Clemson University and will be the men’s team’s 15th head coach. He has a 282-248 record as a head coach.

Last year Eastern went 6-14 in conference and 9-18 overall and finished in the bottom three of the OVC.

The top four players in minutes from the 2020-21 season either transferred or graduated, leaving Kashawn Charles and Henry Abraham as the only Panthers from last season’s team that averaged over 20 minutes a game.

Simmons said the next few practices will be used to determine the key figures in Tuesday’s game, given the amount of new transfers and freshmen.

Abraham, a sophomore guard, said that while all the new faces meant for a slow start, they’ve improved over time.

“We started a little slow since everyone’s been new, but we’ve been working really well together and have been improving a lot but also have a lot to improve as well,” Abraham said.

Simmons also said there aren’t clear standout players this early in the season and that this year’s team was still competing for key roles.

“There just hasn’t been tremendous separation,” Simmons said. “Usually by this time you got a pretty good idea who your starting five is, maybe who your top eight are, but we’re really not- there’s still a lot of competition. Guys are competing for playing time.”

Both Simmons and Abraham mentioned junior forward Jermaine Hamlin, a transfer from University of Illinois, and Kejuan Clements, a junior guard who transferred from Triton College and played for Simeon, a Chicago basketball powerhouse.

“I think Jermaine Hamlin will be a big role for our team and he’ll have a lot of success, I believe,” Abraham said. “Another one is Kejuan. He’ll be the other point guard. I think he’ll be very talented as well.”

“Hamlin is one kid that he has a chance to be a really good player for us,” Simmons said. “Kejuan Clements brings a lot of toughness and he was at Simeon and played on a team that was in the state finals and just loves to compete.”

Simmons said the coaches are hoping to see consistency among individual players and as a unit.

“It’s kind of been daily, we’re like most coaches, we’re starving to see some consistency both individually and collectively as a team,” Simmons said.

Simmons was optimistic about the team’s prospects later in the season, in terms of some players standing out above the rest.

“I think eventually we will have some separation. There will be some guys that are a little more consistent. You may have some guys that seem to have more comfort coming off the bench than maybe they do starting and we’re kind of a work in progress as we move forward.”

After a trip to play Saint Louis University on Nov. 12, the Panthers will play their first home game on Nov. 15 against Central Michigan University.