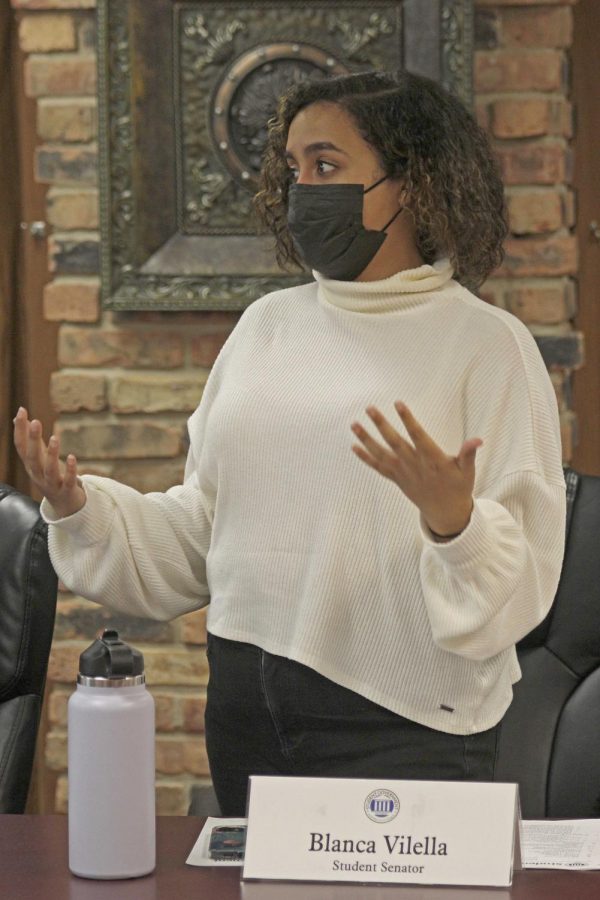 The appointment of Brianna Hull-Dennis to Student Senate was removed from the consent agenda due to her not being able to attend the meeting.

Krishna Raju was appointed to the Student Senate and was sworn in.

“I’ve never really had a lot of leadership experience or being a part of something that makes decisions on things like this, so I thought it’d be a good opportunity to be proud of something. A lot of my friends say good things about it,” Senator Raju said.

Senator Raju will be a part of the Academic Affairs committee.

Constitutions of the registered student organizations that were on the agenda to be voted on are still being revised, so the emergency bills were motioned to be tabled for one more additional week.

Adviser Ceci Brinker said they have heard back from one RSO so far, and they will most likely be included in next week’s agenda, but they are waiting on the other two still.

Senate-on-the-go was approved and will be held next Wednesday, Nov. 10 at 7 p.m. in the Thomas Lobby. Senate-on-the-go is meant to be meetings held in locations outside of 7th Street Underground so that students walking by can see and have easier access to watching the meetings.

The External Relations committee is working on an off-campus housing platform that hosts easily accessible information about local properties for rent including contact information, addresses for all properties, rent prices, several types of properties and amenities.

So far, they have compiled lists of properties, formulated a list of questions to ask property owners, organized a survey that was sent out to Eastern students about off-campus housing satisfaction, price ranges for students, desired amenities and where they would want platform to be hosted.

There were 148 respondents to the survey who rated the quality of off-campus housing as high, word of mouth being the most common way students would find out about housing, singles the most preferred housing style and $400-$500 the preferred price range.

Next steps include potentially expanding their list of properties to a larger radius around Eastern, forwarding survey results to property owners so they can see student feedback, formulate a platform design, decide what they need to complete the platform and collect information from property owners.

There would be no endorsements from rental properties due to legal reasons, no blatant comparisons of properties telling students which is better or worse, no reviews are to be left on the platform about specific properties and the platform will be updated when there is availability in places.

Chamber of Commerce formerly agreed to host the platform and they will be touching base to make sure that this is still in agreement, according to Senator Mitlyng.

Student Affairs is planning a digital tabling series and is drafting an email to send out to RSOs that will let them introduce themselves. This will be compiled and potentially put on the Student Government YouTube page.