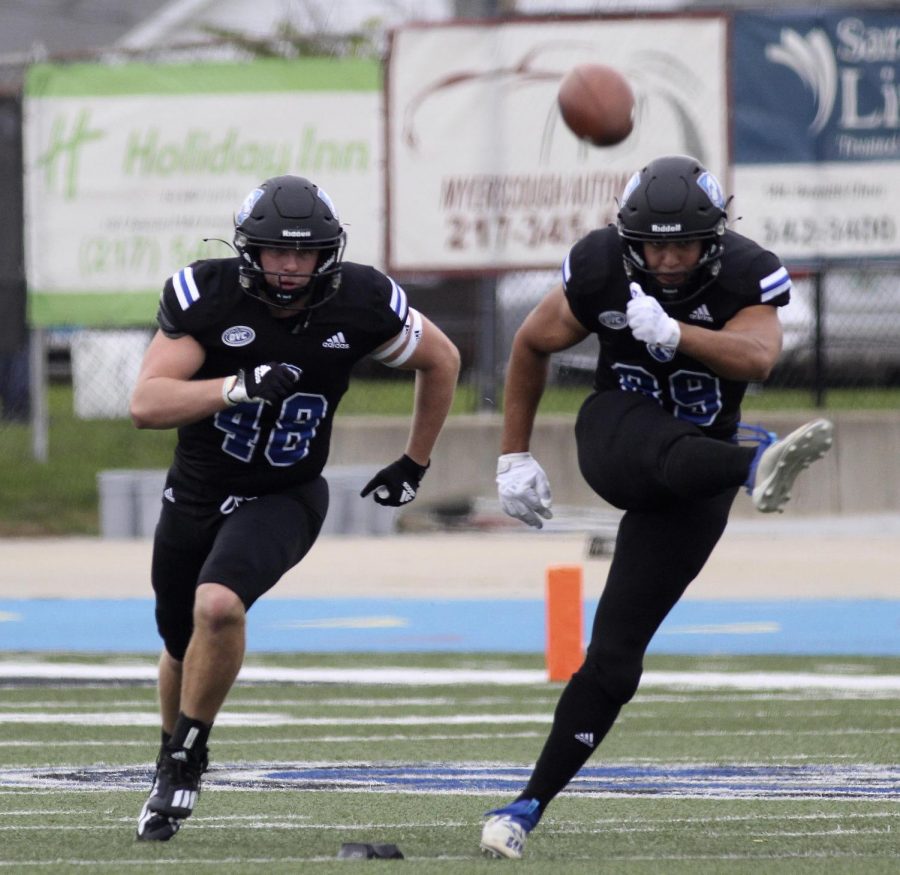 Eastern's Daniel Luoma kicks off in Eastern's Homecoming Game against Tennessee State on Oct. 23. The Panthers lost the game 28-0.

Homecoming Game victories, a game winning touchdown, and setting new offensive career highs are just a few things that describe Week 9 of Play for the OVC.

The weekend started with Eastern taking on Southeast Missouri at Houck Stadium for the Redhawks’ Homecoming Game. With the 38-15 victory, the Redhawks have now won four straight Homecoming matchups.

The Redhawks’ offense dominated the second half, scoring 31 points after trailing to the Panthers 9-7 at halftime. The second half kickoff was returned 86 yards for a touchdown by defensive back Shabari Davis and the Redhawks controlled the momentum of the game after that.

The Redhawks were led by CJ Ogbonna, who passed for 197 yards to add to his two touchdowns and one rushing touchdown, and senior running back Geno Hess.

Hess ran for 107 yards and a touchdown marking his fourth straight 100-yard game this season which pushed him to 1,006 yards in a season for the first time in his career.

Defensively for the Redhawks, Omardrick Douglas and Brandon Mincey had eight tackles a piece.

For the Panthers, wide receiver Isaiah Hill led the offense with 207 yards and one touchdown on 11 catches.

At one point during the matchup against Austin Peay Saturday afternoon, No. 12 Tennessee-Martin faced a 16-point deficit. However, the Skyhawks managed to rally in the second half and walked away with a 17-16-point victory after a game-winning touchdown with 35 seconds to play.

A pair of pick-six interceptions and a field goal was given up by the Skyhawks going into halftime, along with just 62 yards of total offense.

The first strike of the game from the Governors came after Koby Perry intercepted a pass and returned it 75 yards just three minutes into the first quarter. The Skyhawks attempted to answer back in the second quarter Sheldon Layman’s pass was quickly intercepted and returned for eight yards, making it 16-0 advantage for the Governors.

The second drive of the third quarter for the Skyhawks marked a turning point. Running back Zak Wallace had back-to-back seven-yard carries, leading him to his ninth touchdown of the season, cutting the deficit to 16-7.

The Skyhawks used their eight first downs, two third-down conversions, and their fourth-and-one to give quarterback Keon Howard an opportunity to connect with running back Peyton Logan for the game-tying touchdown with 35 seconds to play. Tyler Larco secured the extra point, putting the Skyhawks up 17-16.

The Governors had one last attempt to take the victory with a 49-yard field goal attempt with seven seconds to play. Maddux Trujillo lined up for the game-winning attempt but Eyabi Anoma would break through the line and deflect it, sealing the win for the Skyhawks.

The Skyhawks are now 7-1 and are undefeated in league play. The Governors fell to 3-5 on the season and are now 1-2 in the conference.

Hickbottom ran for three touchdowns and threw for another during Saturday’s contest. The Tigers could only muster one first down in the first quarter as both defenses took control of the game.

With a little over seven minutes to go in the second quarter, the Tigers held the ball for 12 plays before making it a 7-0 lead after Hickbottom ran it in for eight yards. To open up the third quarter, Tiger linebacker James Reese IV intercepted a DJ Williams pass, leading to a 65-yard touchdown run by Hickbottom making it 14-0.

The Racers did not go down without a fight as they scored 21 points to tie the game with four minutes left to play. However, Hickbottom went on a seven-yard run to end a 62-yard drive to secure the Homecoming victory.